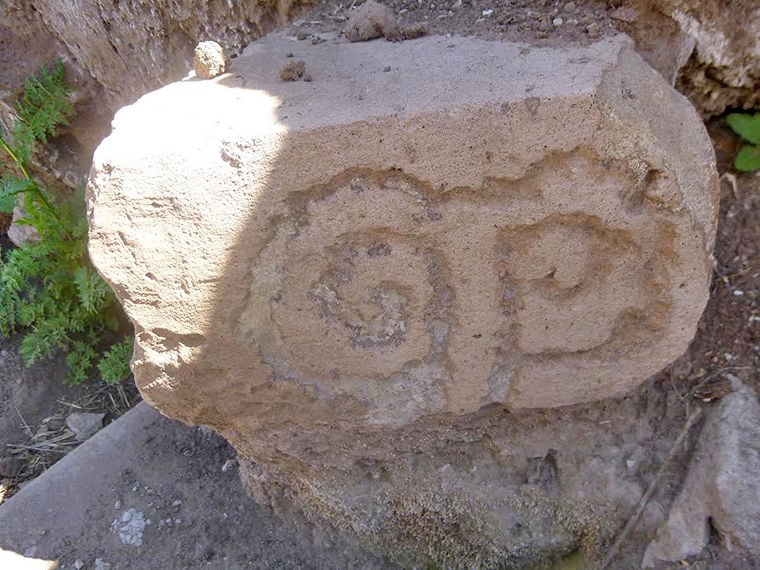 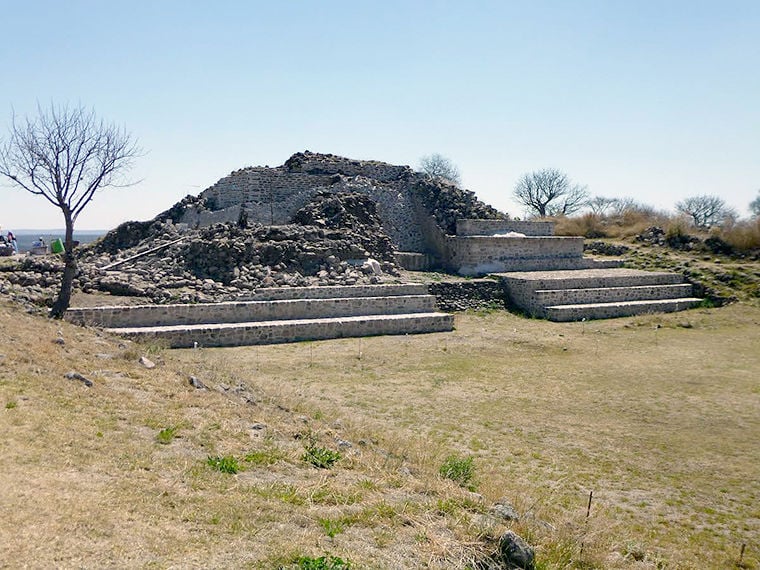 In 2008 the ruins of Teocaltitán were discovererd and are currently being studied.

A group of archeologists from the state of Jalisco are still excavating and reconstructing the site.

The archeological site is located about 120 miles north of Guadalajara in the region known as Los Altos de Jalisco.

The restoration process involves the repair and reconstruction of the ancient structures.

We were excited to visit the site and interview the archeological team about the investigation.

The 1,500 year old ceremonial site had been constructed during the collapse of ancient Mesoamerican societies (500A.D. to 900 A.D.).

Today, the ancient Mesoamerica areas include the nations of Belize, Guatemala, Honduras and Mexico.

The collapse of these ancient societies also occured in the Tequila valley northwest of Guadalajara.

By the year 500 A.D., the spectacular circular pyramids, irrigation systems and ceremonial centers throughout the area came to an end. This indigenous society had either vanished or migrated to other areas.

The population did not return until the flowering of Guadalajara in the Colonial and Modern periods.

While most of the societies were disintegrating, the Teocaltitán site was developed by people migrating from abandoned areas.

The settlement was founded on a mountain top between various newly formed settlements.

The site has a one-sided terrace possibly used for agriculture like Machu Picchu in Peru.

Not having any previous monuments, the Teocaltitán settlement was organized into a new ceremonial center with distinct architecture.

After 500 A.D., the settlement on the high mountain plateau grew to become a regional religous center.

Teocaltitán was organized as a ceremonial center but with few economic functions.

The excavations show a plaza to be made up of one main pyramid, a sunken court yard, a main altar and a ballcourt.

The inhabitants built a pyramid similiar to Teotihuacan, Mexico's most visited archeological site.

The plaza and architectural monuments illustrate the emergence of a new tradition in the context of religious and political elites.

Most important was our interview with the archeologist Alejandro Cuveas and his team.

He is in charge of the restoration and informed us that some excavations are still ongoing.

He mentioned that two newly discovered burial tombs are presently being analyzed.

At the west side of the pyramid, we were shown a petroglyph stone.

Petroglyphs are rock carvings carved into a stone.

They are symbols that reflect artistic expression.

None of the other societies in this region had rock petroglyphs. We believe the petroglyph may have been part of a religious ritual honoring the gods of nature.

In conclusion, this was our first experience in witnessing the field work in a real life archeological study.

Alejandro Cuveas, the archeologist in charge happened to be at the site when we arrived.

We were extremely fortunate as this site is not open to the general public.

When Alejandro and the workers found out we were from Banning they gave us a tour of the site.

What an exciting end to our visit and the opportunity to learn from a working archeological field team!

Curbside-to-Go is open for now, the service could end

The Curbside-to-Go amenity operated by the Food and Beverage Department is open, but is at risk of being closed.

In the spring of 1836, things were not going well at all for the Texas Rebels.