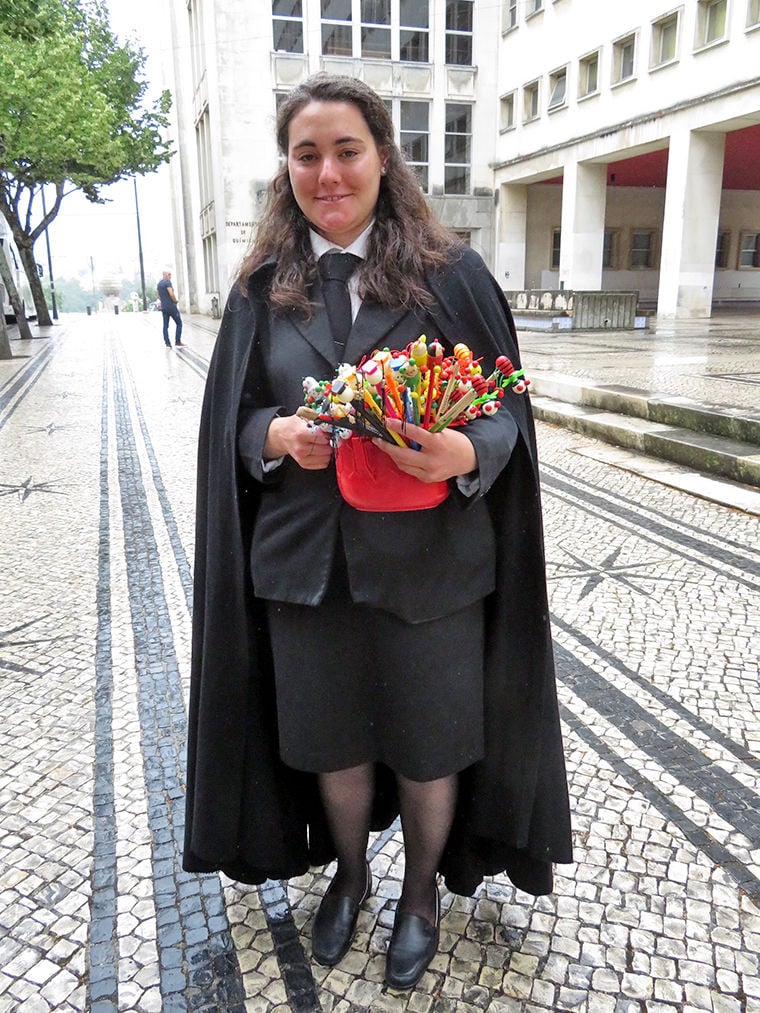 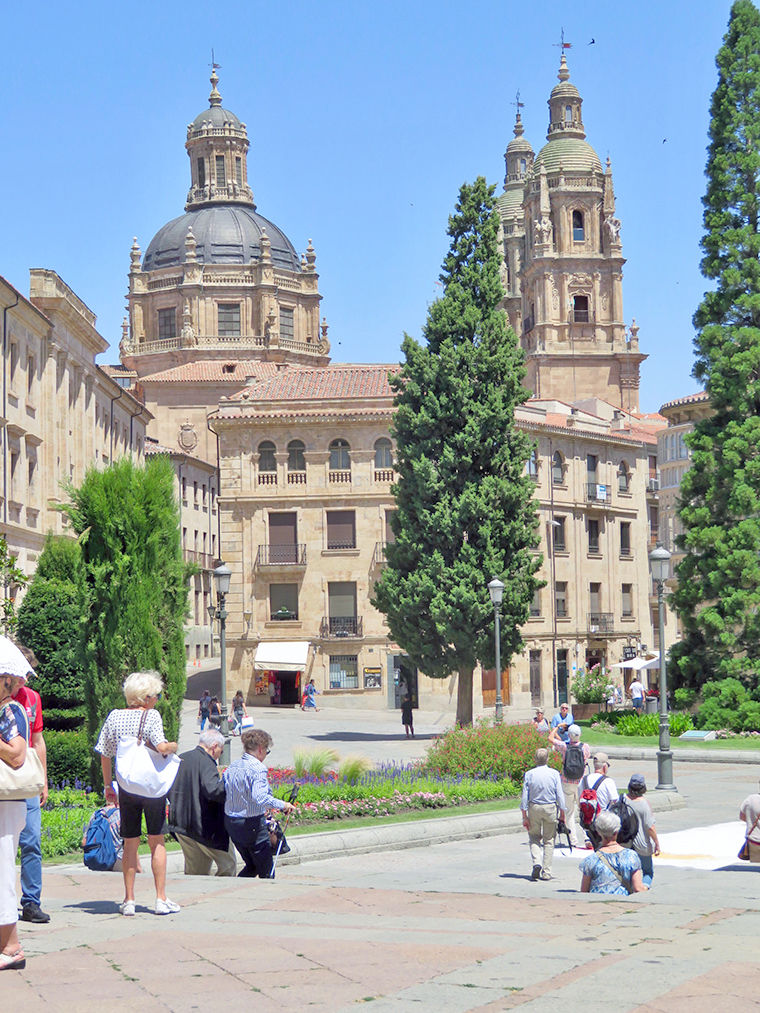 Salamanca, Spain is nicknamed the “The Golden City” because of its golden sandstone buildings. 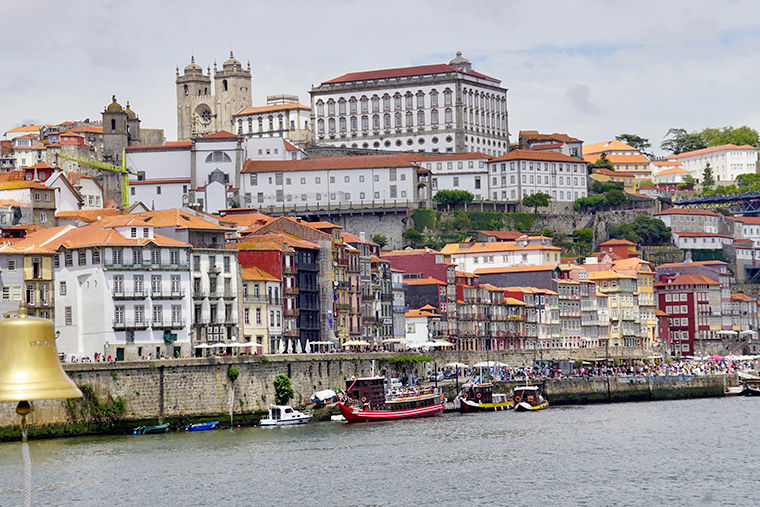 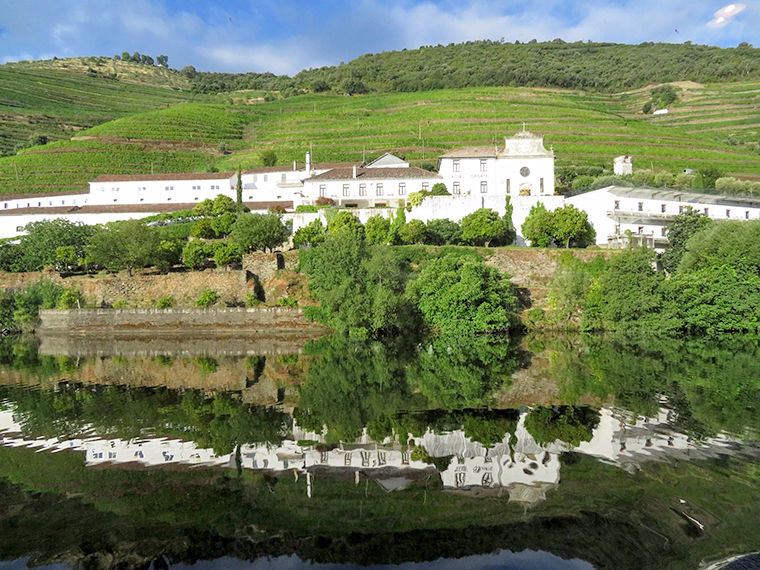 A wine estate on the Douro River in Portugal.

We left Lisbon on a rainy Sunday morning enroute to Porto where we meet our ship for the cruise on the Douro River. As we traveled through the scenic Portuguese landscape, our guide provided information about her country.

Portugal is a leader in renewable energy with a 61 percent of the country’s energy produced through the use of hydropower, wind and solar power.

The country is known for its production of Port (fortified wine) and is one of the world’s largest producers.

Portugal is also the world’s largest cork producer with 70 percent of all cork forests in the world supplying two-thirds of the world’s cork. Cork oak trees are the national tree of Portugal, which are protected by law, and can live to be 150-200 years old. The trees must be 25 years old before the first cork is harvested.

The outer bark of the tree is stripped every nine years to produce a wide range of products for the marketplace such as corks for wine bottles, hats, shoes, handbags, jewelry and clothing. Cork provides good insulation and is waterproof and fireproof.

Interesting enough, NASA has also used Portuguese cork to insulate some of its rockets.

We stopped in Coimbra located in Central Portugal to tour the University of Coimbra, a UNESCO World Heritage site. The university was established in 1290, and it is the oldest university in Portugal. We were greeted by students dressed in school uniforms very closely resembling the Hogwarts uniform of Harry Potter fame. J. K. Rowling lived in Portugal when she penned some of the books in the Harry Potter series and the inspiration for the Hogwarts uniform may have come from the university’s unique student attire.

The black cape, black pants or skirts, black tie and white shirts worn by 99 percent of the students are not mandatory, but reflect the students’ pride in their school. Ribbons of different colors are also worn to identify the students’ major.

We walked through the historic square of the university on our way to the Baroque library, the Biblioteca Joanina, located in the center of the university that was built in the 18th century. The library has three great rooms divided by decorated arches and houses 200,000 plus books from the 16th, 17th, and 18th centuries. The walls of the library are very ornate with gilded and painted walls with impressive paintings by Portuguese artists on the ceilings.

A colony of bats protect the library’s books each night from insects and workers clean the library each morning of bat guano.

We arrived at our ship late in the afternoon where it was docked at Vila Nova de Gaia located just across the river from Porto. Porto is located on the Douro River at the mouth of the Atlantic Ocean and is the second largest city in Portugal known for its port wine. After being welcomed aboard we found our cabin and enjoyed white port and cheese in the lounge.

It was serendipitous that our arrival in Porto coincided with the city’s annual Festival of Saint John. A huge celebration began on the evening of June 23 and continued until dawn to honor Saint John, the Baptist. Thousands of residents from Porto and the surrounding areas celebrated with bonfires, street concerts and dancing, consuming barbecued sardines, drinking wine and releasing illuminated lanterns into the night sky. We had a front row seat on our river boat’s balcony to watch as thousands of lanterns ascended into the night sky across the city followed by a spectacular fireworks show at midnight.

After a late night, we departed early the next day for a tour of Porto. Porto was founded in the 4th century B.C. as a Roman settlement, making it one of Europe’s oldest cities.

Our first stop was at the Porto Cathedral which was built on the highest point located in the historic center of the city.

We spent some time walking through this beautiful cathedral that has a mixture of architectural styles.

Baroque, Romanesque and Gothic styles are featured in the chapels, cloisters and façade.

Mass is celebrated every day at 11 a.m. in this National Monument dating back to the 12th century.

The tile panels, which took two years to put on the walls, depict Portuguese history, people, and landscapes which makes it one of the world’s most beautiful centers for transportation.

Porto is an incredibly picturesque city with the Douro River, medieval streets, and historic buildings that rise from the riverfront to the top of the city center.

This city is a photographer’s dream and I certainly filled my camera with many photos of this eye-catching city.

We began our cruise on Portugal’s River of Gold early the next morning with stops at Regua and Pinhao, a UNESCO World Heritage Site.

The Douro River Valley is one of the most charmingly idyllic places we have ever visited. Terraced vineyards rise up from the edge of the river to the sky with red-roofed villages and quintas (wine estates) dotting the hillsides. The location of the Douro River Valley on the Iberian Peninsula provides the perfect microclimate for growing grapes for the region’s famous port wine.

Each night our ship docked in a small rural village before sailing on to its next destination.

Barca d’Alva was the last Portuguese village on the Douro River located less than two miles from the Spanish border.

We boarded buses and crossed into Spain to visit “The Golden City” of Salamanca. As we made the drive through the Iberian countryside we passed houses, buildings and other structures with huge stork nests and many storks atop them. Without a doubt these were the largest nests I have ever seen.

The storks migrate from Africa to Spain and return to the same nests every year to hatch their chicks or construct a new nest not far from the old one.

Many homeowners remove the nest, only to have a new one built in its place the next year.

Our guide joked that “it’s easier to move the house than to keep removing the nest.”

Salamanca was named a UNESCO World Heritage Site in 1988.

Many of the buildings are constructed from sandstone which gives off a golden glow that adds to the beauty of this glorious and ancient city.

­We began our walking tour with a stop at a local market where we were offered a tasting of wine, cheese, bread and Iberian meats accompanied by a glass of wine.

Fortified by the mid-morning snack, we moved on to the Plaza Major (Main Plaza) that dates back to the 1700s.

The University of Salamanca, the first university in Spain and the fourth oldest in the world was also on our walking tour of the city.

The university’s architecture is a stunning example of Plateresque style, featuring ornate facades from the Gothic and Renaissance periods making the university not only a place of education and enlightenment, but also an artistic treasure.

As the day grew warmer we ended our tour by walking through the Old and New Cathedrals of Salamanca.

These two cathedrals are joined together and we admired the architecture and beauty of these breathtaking edifices while enjoying a respite from the heat wave that was enveloping Europe.

NEXT: More of the Douro River and then on to Barcelona.

Although it didn’t start out that way, I have a story to tell with a happy ending. It’s about a little scrappy 5-pound dog found on Super Bowl Sunday on the North side of Sun Lakes.

Folkloric dance as an art form

Folkloric dance, Baile folklorico, is a compilation of folk dances from all regions of Mexico, as well as Columbia, Honduras and many other countries of South America.

The April art classes will be taught by Betty Jo Ford on April 6-13-20 in the Main Clubhouse Arts and Crafts Room from 9 am until noon.

This week I am spotlighting Konnie Becerra, a server in the Sun Lakes Restaurant, who has been here for 19 years. Connie works breakfast and lunch in the restaurant and has worked in the Food and Beverage Industry since she was in her 20s. Because of her prior experience, Konnie began workin…

In the 1950’s during the early days of modern science fiction, a short story entitled “The Lady Margaret” was included in an anthology of the best science fiction of the decade.

In a terrific performance to a full house, the Everly Brothers Experience came to Sun Lakes at the last Friendship Club performance.