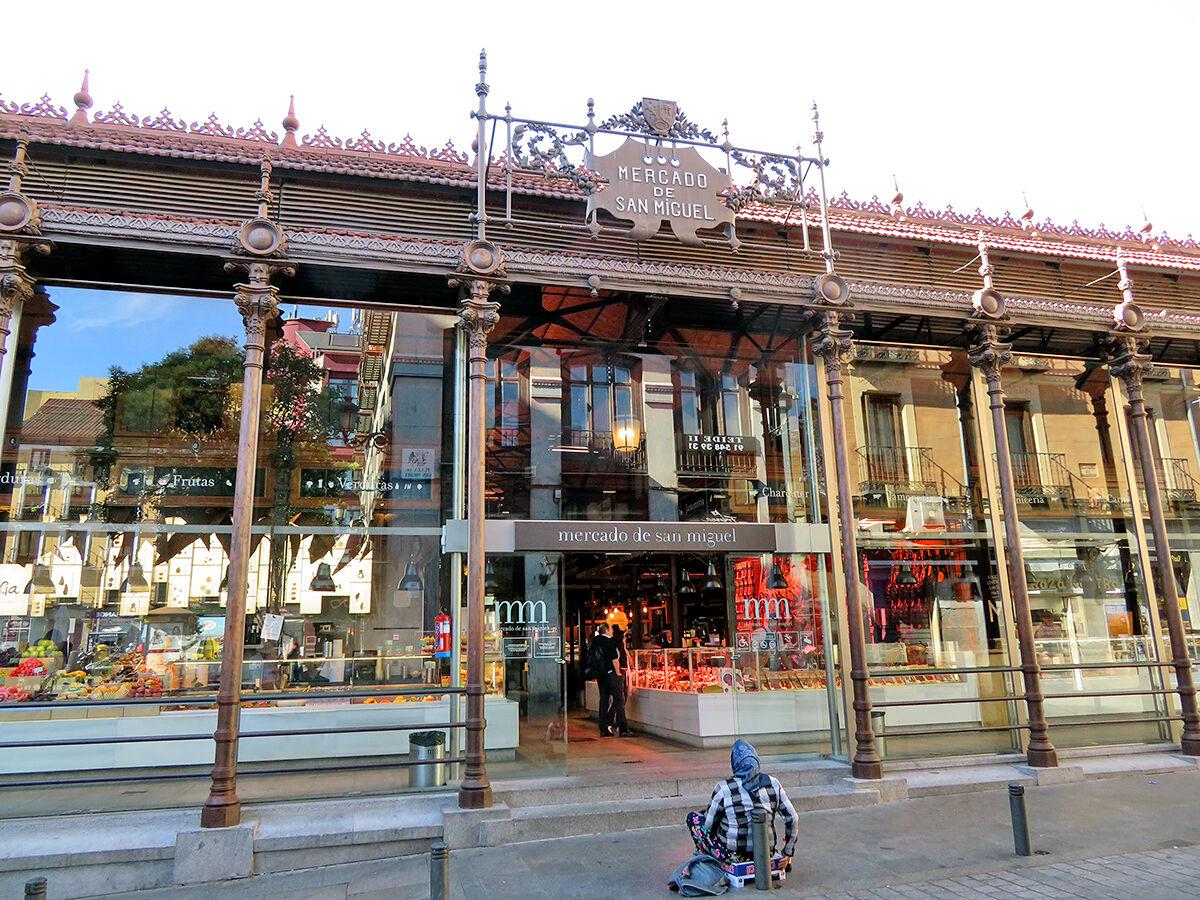 The Mercado De San Miguel Market in Madrid is one of the city’s gastronomic treasures. 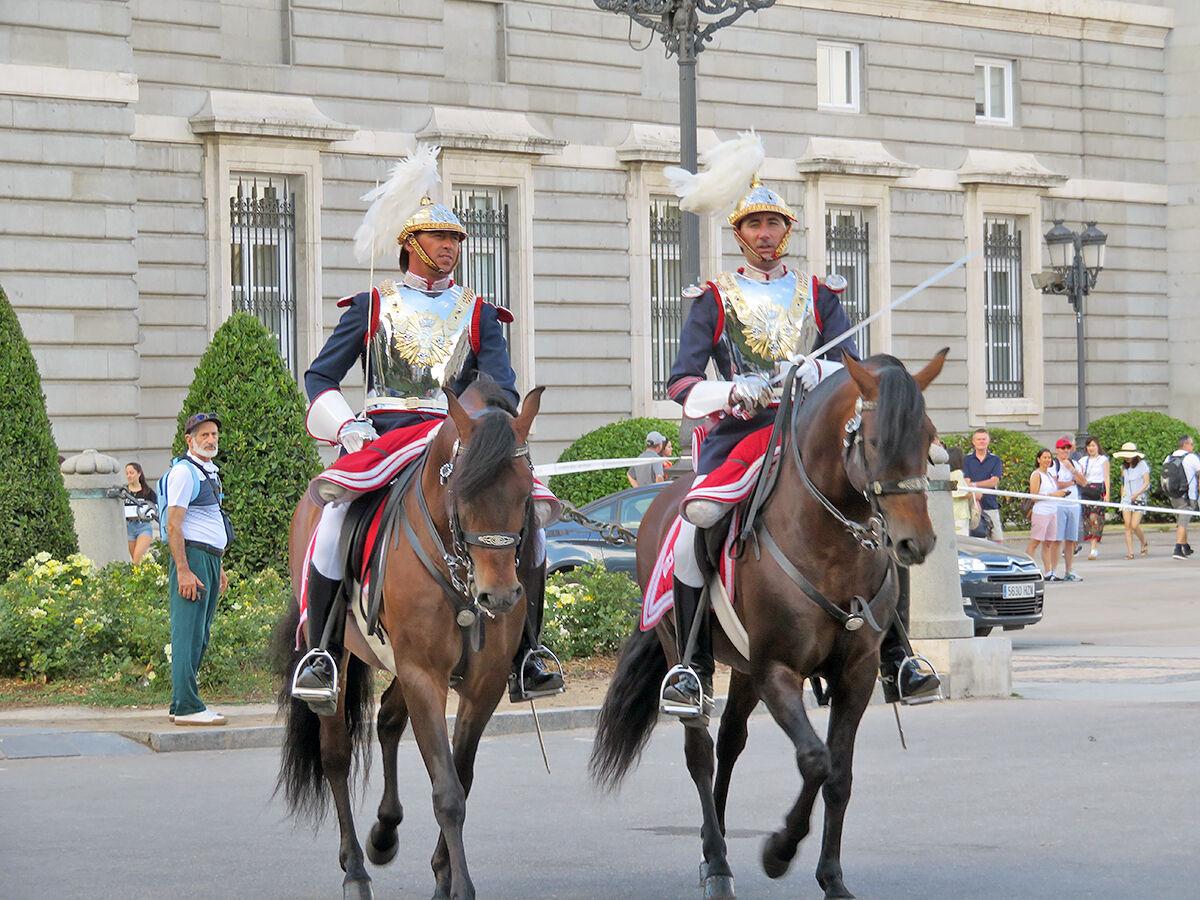 Members of the Spanish Royal Guard await the arrival of King Felipe VI at the Royal Palace in Madrid. 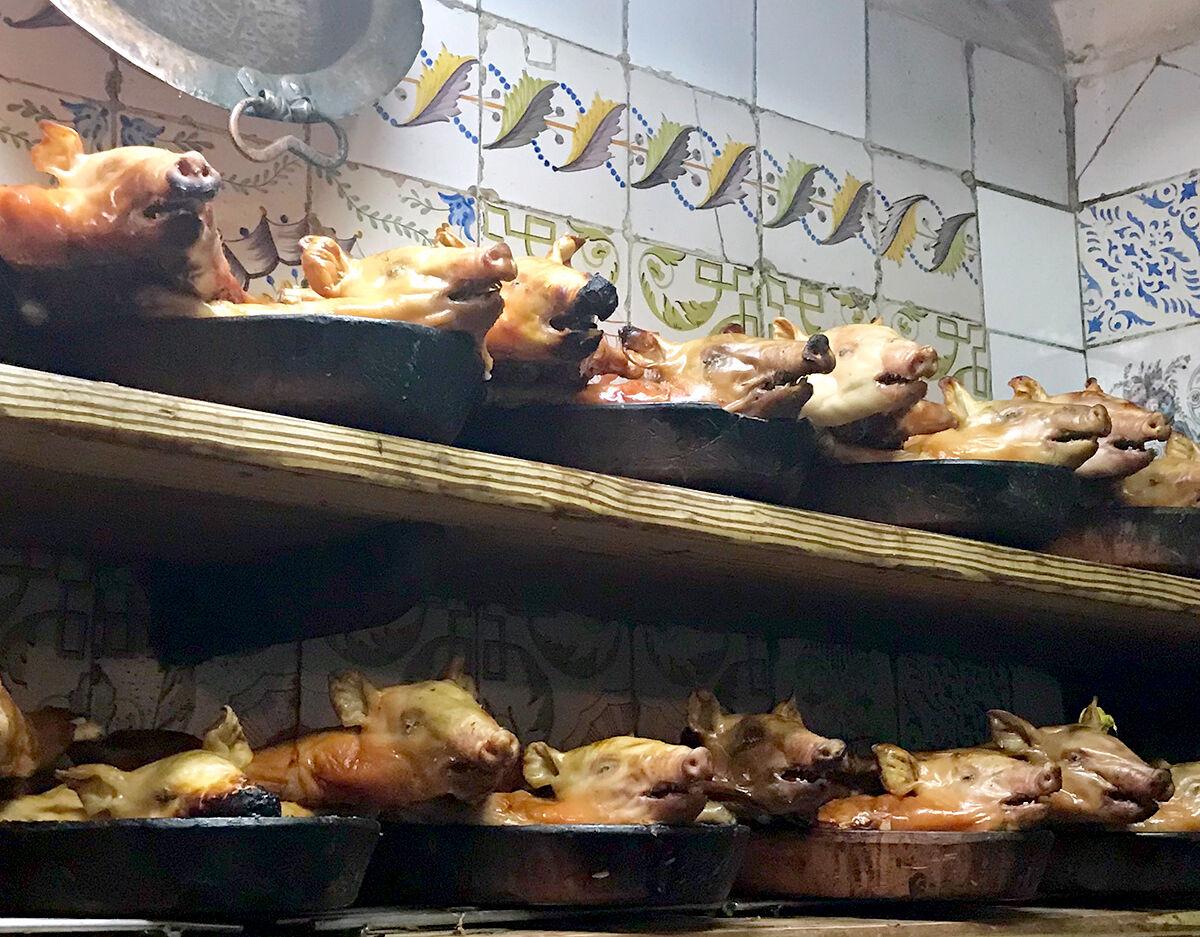 Roast suckling pig in the oven room at Botin Restaurant in Madrid.

Despite the nine hour time difference we were up early the next for a tour of Madrid.

We drove along Madrid’s wide and fashionable avenues and boulevards featuring beautiful fountains and historical monuments. A large percentage of the city is dedicated to parks and gardens for Madrid’s 3.2 million residents to use and enjoy.

We passed the U.S. Embassy and City Hall before embarking on a walking tour of the Plaza Mayor de Madrid (Main Square or Plaza). The Plaza Mayor was built when the Hapsburg Empire ruled Spain and was the center of Old Madrid.

Government offices, private residences and shops are housed in this historical landmark while restaurants and cafes located inside the walls of the plaza provide the perfect setting to people watch while enjoying a cup of coffee or a glass of sangria.

Our tour moved on to the Mercado De San Miguel, one of Madrid’s oldest and most stunning markets that caters to locals as well as tourists.

We strolled the aisles of this delightful marketplace which opened in 1916 and is an example of early 20th century architecture.

Stalls throughout the market offer many types of cuisine from throughout Spain which included everything from fresh fruit and vegetables to gourmet Iberian ham, cheeses, olives, fresh seafood and Spanish wine. Tapas (a hot or cold appetizer or snack in Spanish cuisine) bars can also be found within the market giving both locals and tourists a place to meet and enjoy the gastronomic treasures found within the market’s walls.

We walked on to the Royal Palace.

The Spanish Royal Guard on horseback, along with a very large police presence, including snipers on the surrounding buildings, reporters with television cameras, citizens and tourists awaited the arrival of King Felipe VI. The King was arriving at the Palace from his home located on the outskirts of Madrid to celebrate his fifth anniversary on the throne.

Because of our schedule, we were unable to stay to witness the King’s arrival so we re-boarded our bus and traveled on to the Prado Museum.

The Prado Museum is the National Spanish Art Museum which houses a collection of 3100 works of art and features paintings by Spanish artists El Greco, Goya and Velazquez which our guide focused on during our tour.

At the end of the city tour my husband, Bill, and I returned to the hotel to freshen up before our late afternoon reservation at Restaurante Sobrino De Botin.

A Madrid fixture for nearly 300 years this restaurant is representative of Castilian style cuisine and was recommended to us by Sun Lakes’ resident, Nancy Guthrie.

Because of its popularity, reservations are hard to come by, so we made a reservation before we crossed the pond. Botin was established in 1725 and is recognized as the oldest continuously operating restaurant in the world by the Guinness Book of Records.

The restaurant has three dining rooms on different floors with wood beamed ceilings and is popular with locals as well as tourists.

The specialty of the restaurant is roast suckling pig and roast lamb that is cooked in the wood fired oven that dates back to the restaurant’s beginning.

I couldn’t pass up the house specialty and ordered the roast suckling pig.

The skin was crispy and the pork was tender, juicy and tasty.

After our meal a waiter gave me a personal tour of the restaurant that included the Horno (the oven room), the kitchen, the Bodega (cellar) and the wine cave. We certainly enjoyed the experience of dining in this beautiful and historical restaurant where Ernest Hemmingway, Goya, and the King and Queen of Spain have dined.

On our last day in Madrid, we had free time to explore the city on our own.

We took a taxi to Puerta del Sol (Gate of the Sun) which is one of the busiest public squares in the city and walked along the meandering passageways that fan out from the central hub of the square.

We found our way back to the Mercado De San Miguel and stopped for some stuffed olives and a cold beer before walking on to spend some additional time in the Plaza Mayor.

After several hours of sightseeing we returned to the hotel to prepare for the highlight of our stay in Madrid, a Flamenco show at Corral de la Moreria which is sometimes referred to as the “Cathedral of Flamenco.” This tablao (Flamenco club) is located in the old Hapsburg Quarter of Madrid and was the perfect ending to our brief stay in Madrid.

At the Los Angeles Air Meet of 1910 held in what is now Carson there were several rigid airships (as opposed to blimps and balloons that had no frames). These very large aircraft seemed to foretell of long distance travel in the air.