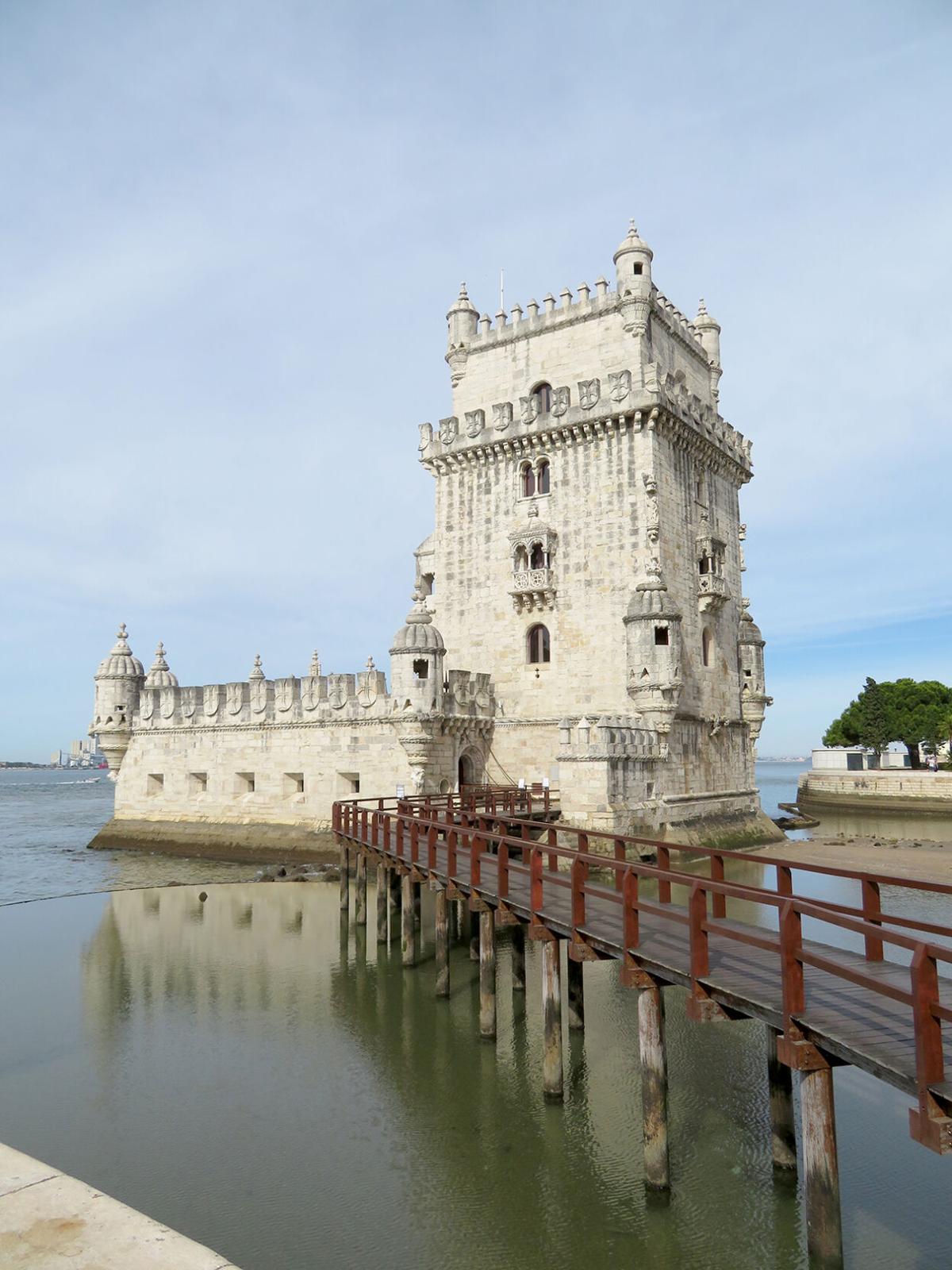 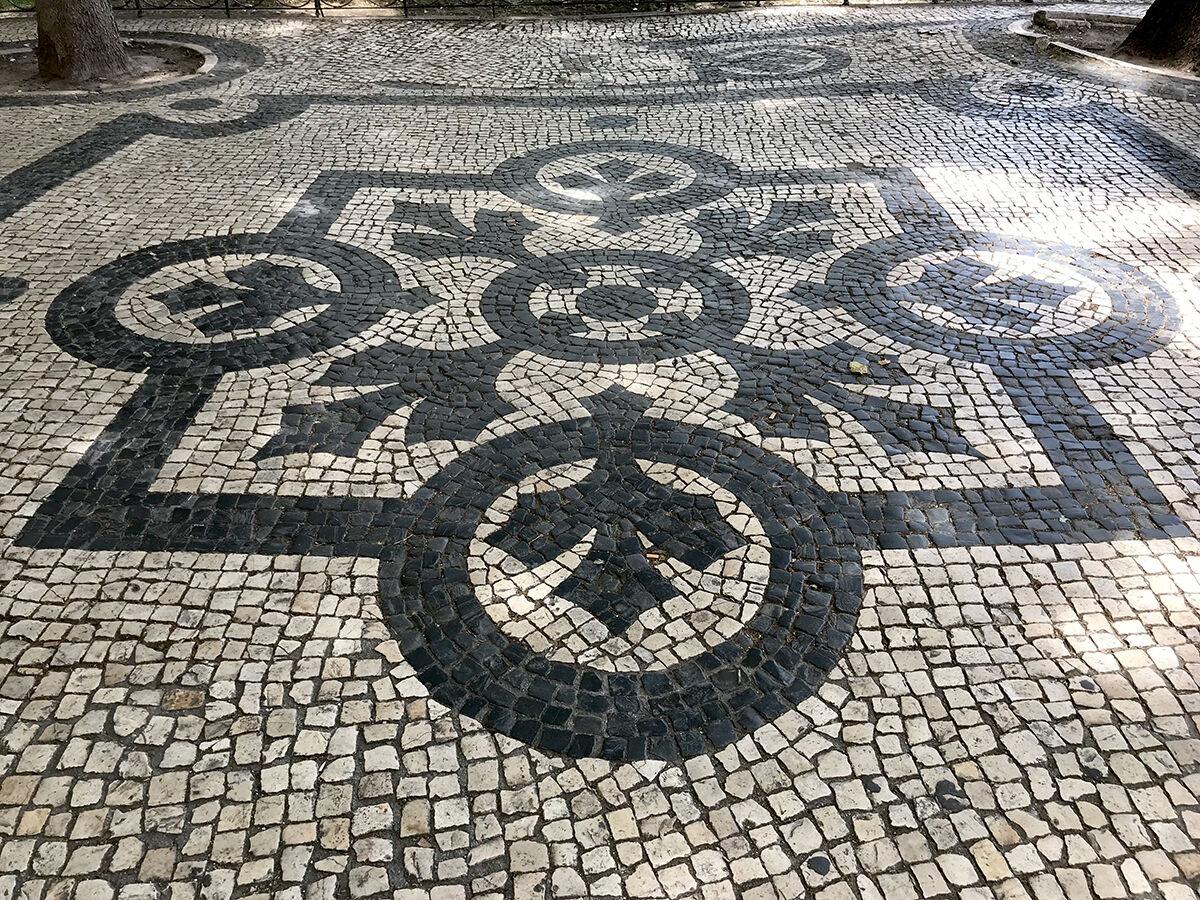 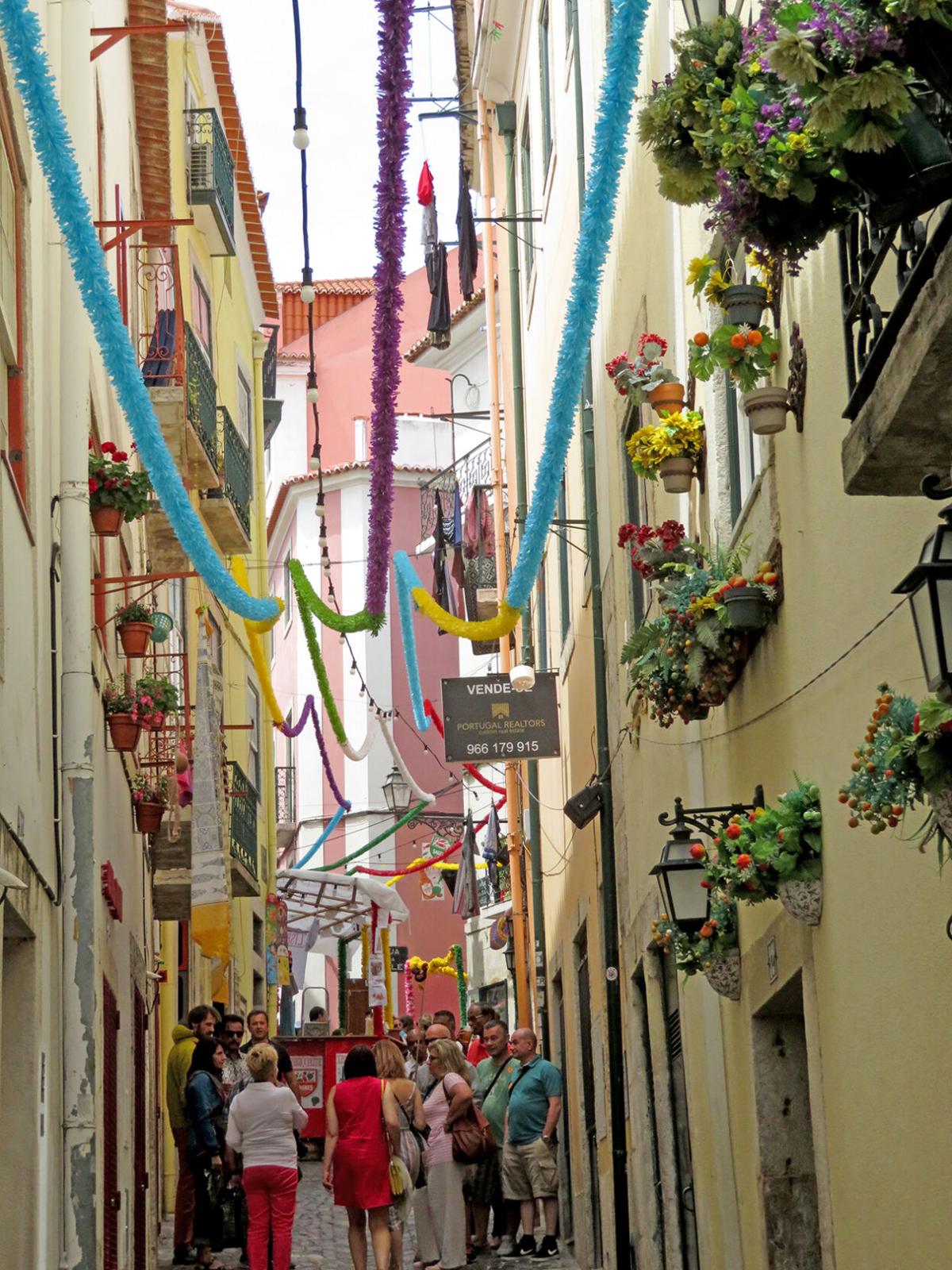 Lisbon (Lisboa in Portuguese) is the capital and largest city in Portugal.

This hilly coastal city, built on seven hills, is very cosmopolitan and is located in the western Iberian Peninsula on the Atlantic Ocean and Tagus River.

Our tour of the city included driving through areas with pastel colored houses and buildings with unique and charming balconies as well as Azulejos tiles on the facades of many of the buildings. Jacaranda trees, oleander and bougainvillea added colorful accents to a stunningly colorful city.

Our tour of the city included a stop at Belem Tower which is an iconic landmark in the city and a UNESCO World Heritage Site.

The tower was built in 1515 as a fortress to guard the entrance to Lisbon’s harbor and a monument to Portugal’s Age of Discovery.

The ornate stone carvings on the exterior of the tower introduced Manueline (Portuguese late Gothic) architecture to the world and is a stunning example from the 16th century.

The iconic sidewalks in Lisbon are a beautiful art form known as Portuguese Pavement.

The largest concentration of these artistic sidewalks are located in the historic center of the city and along Avenida Liberdade.

The mosaics are made from five inch cubes of limestone and black basalt that are incredibly beautiful but are also dangerously slippery that become even more treacherous when wet.

We also visited Jeronimos Monastery, another impressive example of Manueline architecture, and a UNESCO World Heritage Site built in the early 1500s.

We walked through the Cloisters and marveled at the beauty of this architectural masterpiece.

By far, my favorite part of the Lisbon city tour was the walking tour of the Alfama District in Lisbon’s Old Quarter.

There are many benefits to traveling, but one of the joys is experiencing the foods of a country or region.

After our arrival in Lisbon, it wasn’t long before we were introduced to Portuguese egg custard tarts known as Pastel de Nata.

These delicious and highly addictive tarts have a crisp pastry shell that are filled with a creamy, sweet custard and dusted with ground cinnamon.

It is said that Portuguese nuns would use egg whites to starch their habits and the overabundance of egg yolks led to this tasty dessert.

Our two days in Lisbon were brief, but I hope to return to Portugal again in the future to discover more of what this beautiful country has to offer.

Residents volunteer their dogs for the greater good

Two beautiful puppies were turned in to Guide Dogs of the Desert (GDD) last weekend for advanced training to become service dogs for the blind or visually impaired. The training will take about six months before the dogs will be matched with their new handlers. The matched pairs will live to…

Invitational open to all women golfers

The Sun Lakes Women’s Golf Club (SLWGC) is extending an invitation to all resident lady golfers to play in their Second Annual Open Invitational game on Thursday, December 9 at 9 a.m.

It was a spectacularly beautiful day to honor veterans who have served our country.

The annual Craft Fair, held in the Main Clubhouse on Friday and Saturday, Nov. 5 and 6 signaled a much welcome return to the social activities Sun Lakers love so much.

Most of the forty-six men who have ascended to the presidency have fathered children.