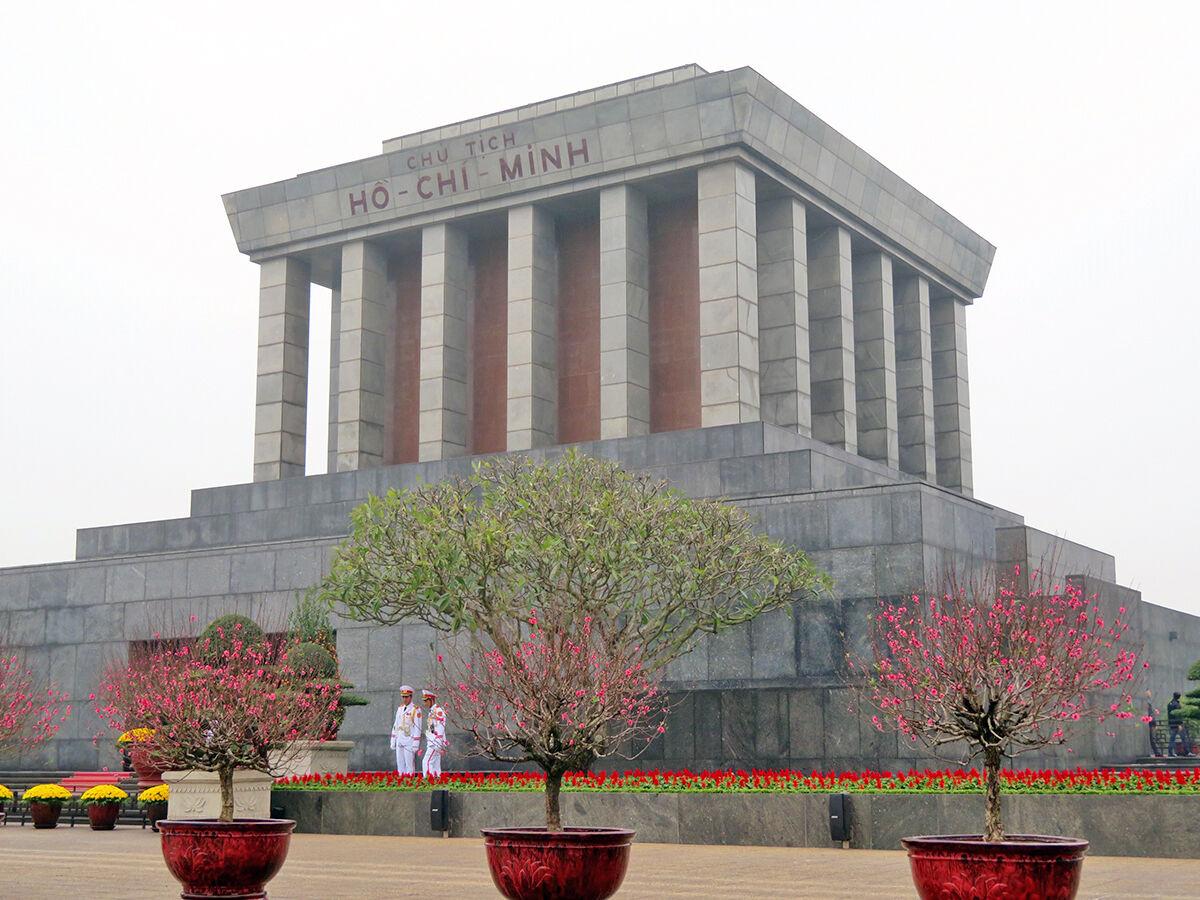 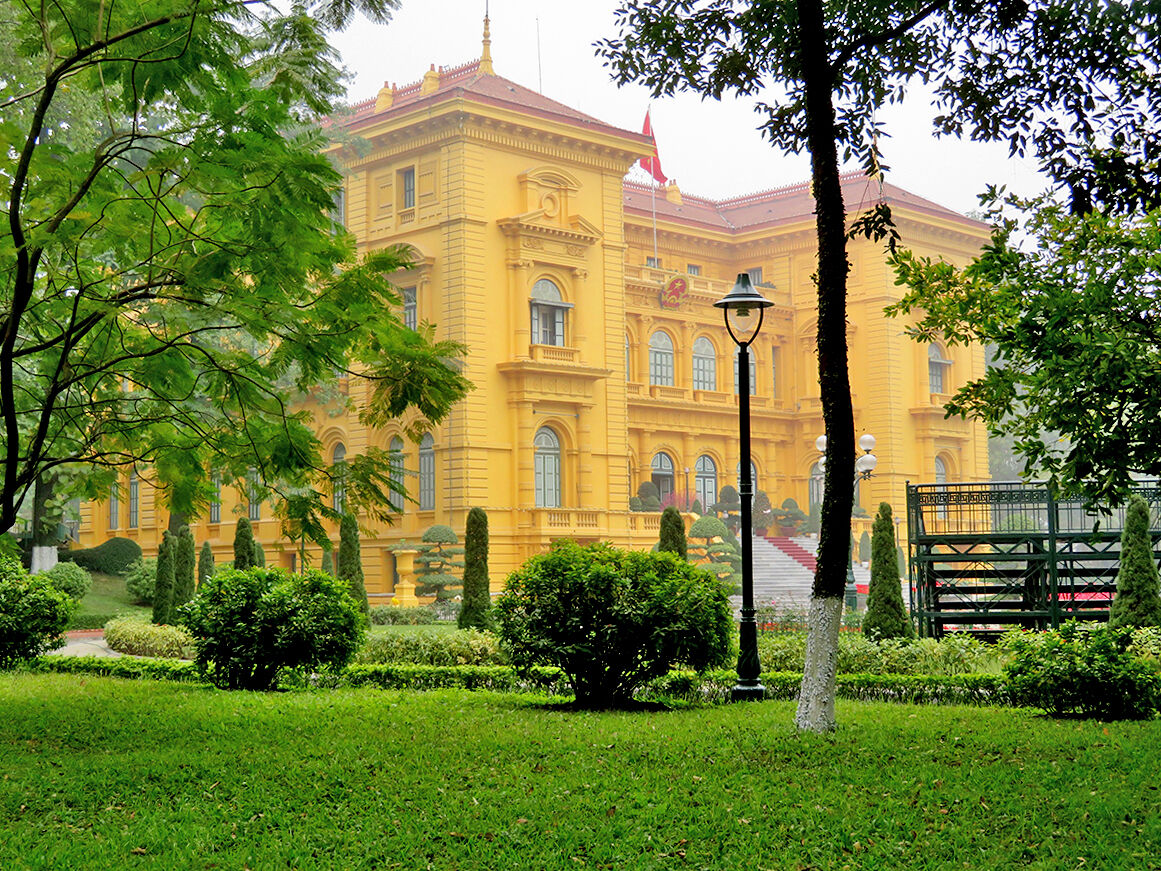 The Presidential Palace in Hanoi. 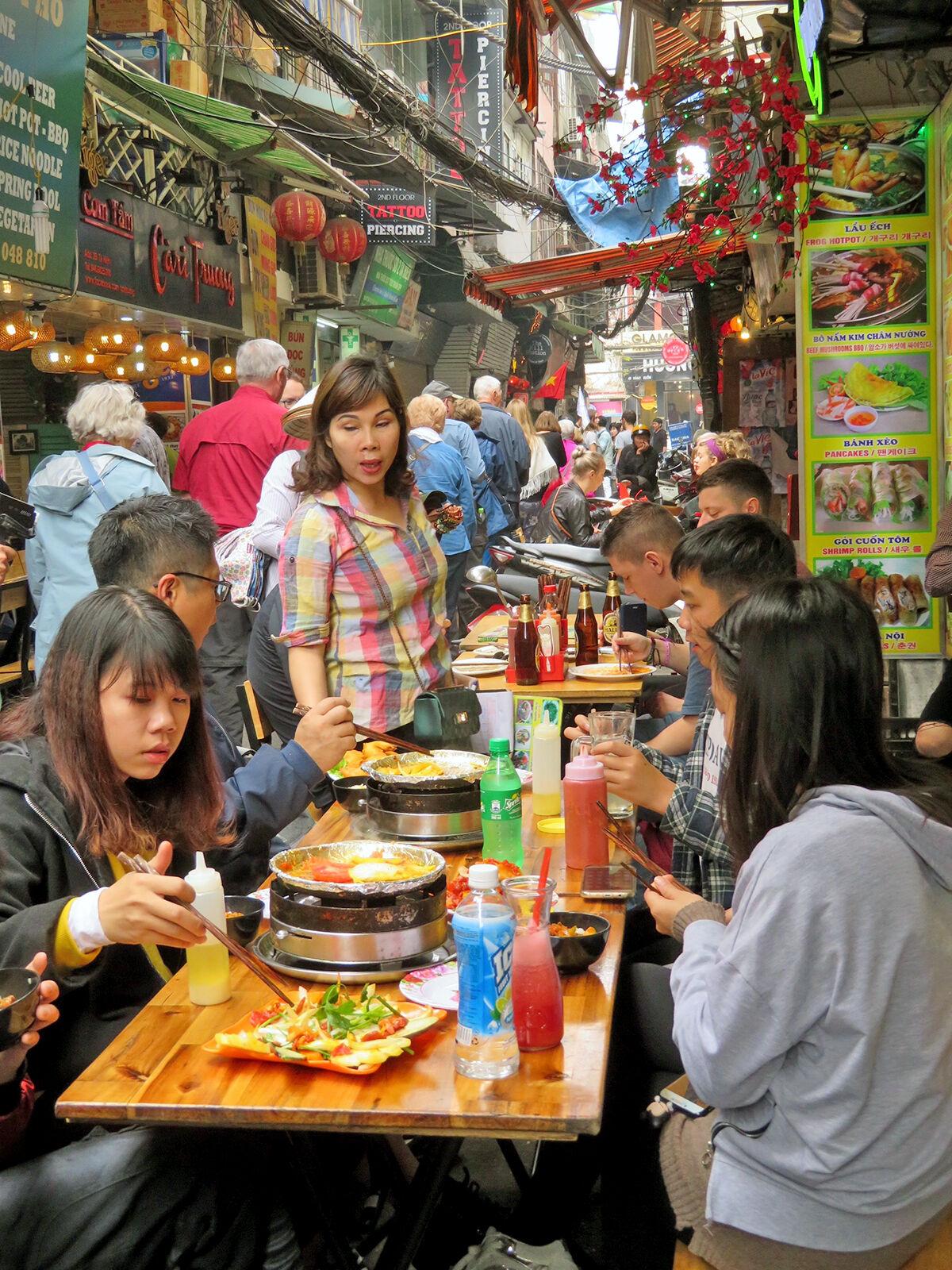 A sidewalk restaurant in the Old Quarter of Hanoi.

We arrived in Hanoi, the capitol of Vietnam, just before the Lunar New Year began in 2018. Banners emblazoned with “Chuc Mung Nam Moi” (Happy New Year) could be seen hanging from businesses, government buildings and private residences.

Citizens were busily preparing for Tet, which is the most important celebration in Vietnamese culture and along with the banners, flowers, kumquat trees and peach blossom branches could be seen everywhere.

After a long flight from Los Angeles, we met our guide and checked into our hotel.

From our room on the tenth floor we watched the unrelenting activity from our window as residents of the city went about their daily lives on thousands of motorbikes below.

We could also see Truc Bach Lake where John McCain was captured and taken prisoner during the Vietnam War.

McCain parachuted from his plane after it was shot down by a North Vietnamese missile where he nearly drowned before being pulled from the water.

Today, a monument to the late Senator McCain is located on a bank of the lake.

Our first tour in the city was at the Ho Chi Minh Mausoleum.

The large building is located on a plaza with gardens surrounding the mausoleum and are planted with a wide variety of plants and flowers from different regions of the country.

We filed past the embalmed body of Ho Chi Minh which is enclosed in a glass case in the dimly lit central hall of the building and is protected by a military honor guard.

After exiting the mausoleum we watched the goose-stepping changing of the guard dressed in white uniforms which are a symbol of mourning in Vietnam.

During our tour of the city, we also visited the Presidential Palace, Ho Chi Minh’s House on Stilts and One-Pillar Pagoda.

The yellow, French Colonial Presidential Palace is not open to the public, but hosts government meetings and receptions for visiting dignitaries.

We also visited One-Pillar Pagoda, a historic Buddhist Temple built in 1049, designed to resemble a lotus blossom and the Temple of Literature which was built in 1070 as a university and dedicated to the Chinese teacher, Confucius.

The highlight of Hanoi, for me, was a walk that was not part of our scheduled itinerary through the Old Quarter of the city the day before TET.

The maze of streets in the Old Quarter were teaming with people, motorbikes, bicycles and vendors selling flowers, produce, TET decorations, food, clothing, gifts, live chickens and a freshly slaughtered pig that had been brought to the market on the back of a motorbike.

This unplanned walk was a kaleidoscope of colors, sights, sounds and aromas that provided a fascinating glimpse of Vietnamese culture and traditions.

Before departing Hanoi, many of us wanted to visit Hoa Lo Prison commonly referred to as the “Hanoi Hilton.”

The prison was built in 1896 and from August 1964 until March 1973 part of the prison was used to hold captured American POWs.

Vietnam, although now a unified country, still seems to have some differences between the North and the South.

In Hanoi it was very common to see military soldiers and a police presence on every block and the people seemed more serious and stoic than their counterpoints in the southern part of the country.

In retrospect, I am glad we had the opportunity to visit this French-colonial city and experience its centuries-old architecture as well as the culture and traditions that surround the yearly celebration of TET.

A week of golf and new friendships

The Ladybugs Golf Tournament is held each year in October in Fort Mojave, Arizona and this year’s tournament was held on October 28 and 29. Marilyn Tefank, a Sun Lakes resident, had played in the tournament only once before and golfing buddy, Linda Emmerson of Banning, had played the tournam…

Back in the mid-1950’s, long before the term “reality TV” was even coined, there was a reality TV show dubbed “You Asked For It”.

Like most other holidays in 2020, Sun Lakes celebrated Veteran’s Day a little differently this year.

Joe Shaw celebrated his 80th birthday last month at a surprise dinner party given by his wife, Patti Webb.