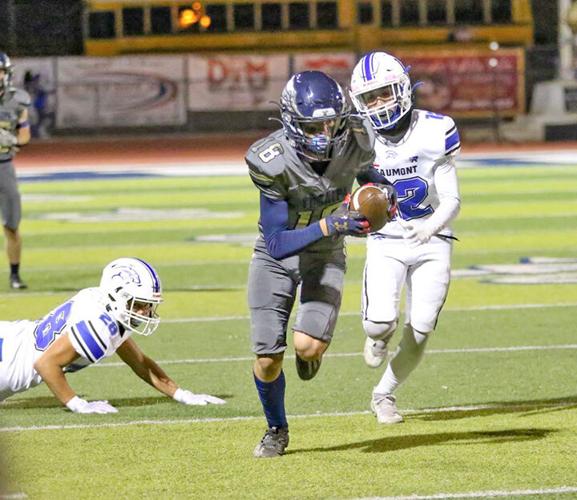 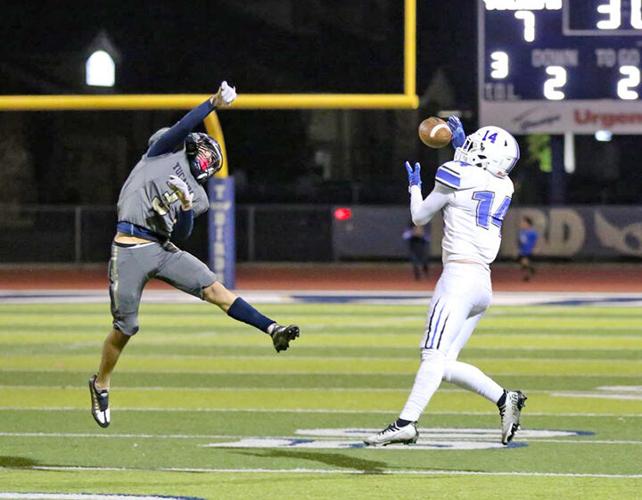 Ryan Torres (14) hauls in a pass for Beaumont.

Ryan Torres (14) hauls in a pass for Beaumont.

Three plays failed for the Yucaipa High football team, and this was its last chance. Fourth and eight. On the Beaumont 23.

Quarterback Albert Suarez took the snap in an eventual 22-21 Yucaipa overtime victory. He handed the ball to Elijah Smith, who pitched it to Kai Smith (no relation).

Star receiver Rudy Castillo leaked out to the right side and found himself wide open in the end zone. He gathered in the touchdown pass that brought his team to within one point.

“It’s a Z reverse pass,” Castillo said. “It’s like a double pitch to a pass and they think we’re running a sweep. They had two [men] on me but then they saw the run and I took off and I was wide open. I knew it was game time and I wasn’t going to drop it.”

Yucaipa coach Justin Price had the option of kicking the PAT or going for two. He chose the latter.

“I didn’t expect for us to go for two, I thought we’d try to tie it,” Castillo said. “So I started running off the field and they said to go back in and make a play.”

Said Price, “The decision to go for two was that we just wanted to end the game when we had the chance, and we were pretty tired. I figured it we were going to go for it, we might as well do it now.”

Suarez on the 2-point try found Castillo open in the left corner of the end zone. The senior caught the two-point conversion pass and then disappeared into a knot of well-wishers on the sideline as the official raised his arms.

“We got in a tight formation and their defense was pretty confident,” Castillo said. “They thought we messed up by going for two. But I got myself open and Albert made that perfect throw. It feels amazing, especially on my senior night.”

The victory clinched an outright CIF-Southern Section Division 5 playoff berth for Yucaipa (6-4 overall, 3-2 Citrus Belt League). The Thunderbirds are at Etiwanda at 7 p.m. Friday, Nov. 4, in an opening-round game.

Beaumont coach Jeff Steinberg said he considered going for two points when Christian Davis scored on a 2-yard run with 2:30 left in regulation to move to within 14-13. But the veteran coach opted against it. He was not surprised Price went for two in OT.

“Everybody was tired,” Steinberg said. “They looked tired, and we were kind of getting worn down a little bit.”

Yucaipa scored on its first possession of the game on a 25-yard pass from Suarez to Castillo. Castillo caught nine passes for 66 yards and three touchdowns. He also latched onto the pivotal 2-point conversion pass.

Down 7-0, Beaumont tied the game with 23.4 seconds left in the half on a 1-yard run by Myion Walker.

The Thunderbirds seized the lead 14-7 on their first possession of the second half. Again, Castillo made it happen, catching an 11-yard TD pass from Suarez.

“Lot of clutch plays by Rudy,” Price said. “I challenged him at halftime because he had so many drops in the first half, and I thought he came back and really played well. I’m just happy for him.”

That was all the scoring until the final three minutes when Walker burst through the line into the end zone for Beaumont.

Following Castillo’s game-winning 2-point conversion, he ran to the middle of the field with his teammates and was swallowed up by well-wishers. It was a Senior Night for him to remember.

It was also a sweet victory for the Yucaipa program.

“We needed that,” Price said. “We played them in the spring season [2021] here and we had a three-touchdown lead in that game, and they came back and beat us in the second half. It was a big win for them, and they celebrated on the field and it left a sour taste in our mouth. There were probably 10 of our seniors from that spring season here tonight, so it was a big win for us.”

Cooper completed 26 of 44 passes for 227 yards for Beaumont and had two intercepted.

Yucaipa’s Suarez completed 17 of 29 passes for 182 yards and three touchdowns with one intercepted. He also rushed 19 times for 63 yards.

Marvin Hungerford, Tyler Price and Will McHargue made eight tackles apiece for Yucaipa and McHargue had one sack. Dean Kirkland made seven tackles.

Tyler Noah, Hungerford, and Castillo had interceptions for Yucaipa.

Redlands High senior Caden Henderson has an ambition. He’d like to be the king of all world media. Failing that, he will settle for being a sportscaster for some major media outlet.

The boogie man got spooked.

It was an excellent day for the black and gold.

Three plays failed for the Yucaipa High football team, and this was its last chance. Fourth and eight. On the Beaumont 23.