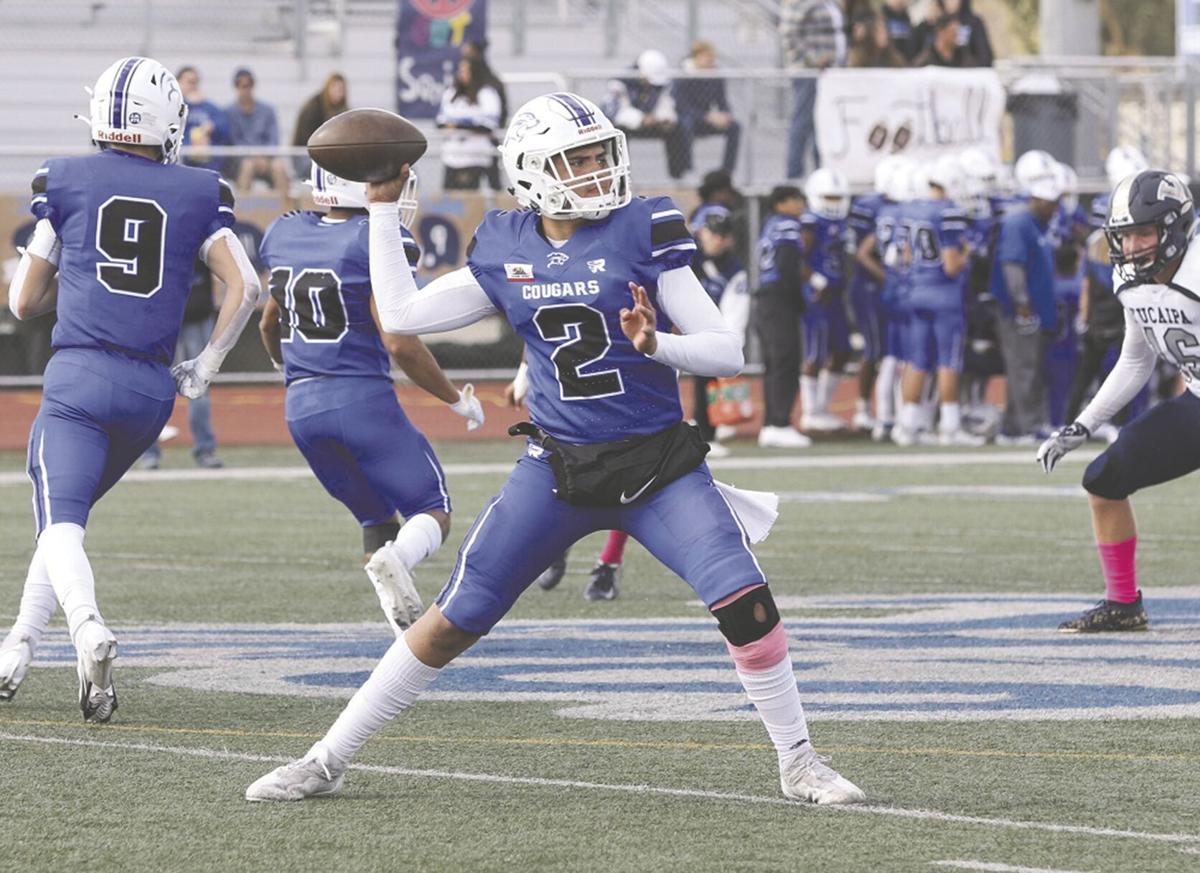 Beaumont quarterback Christopher Cooper airs it out against Yucaipa. 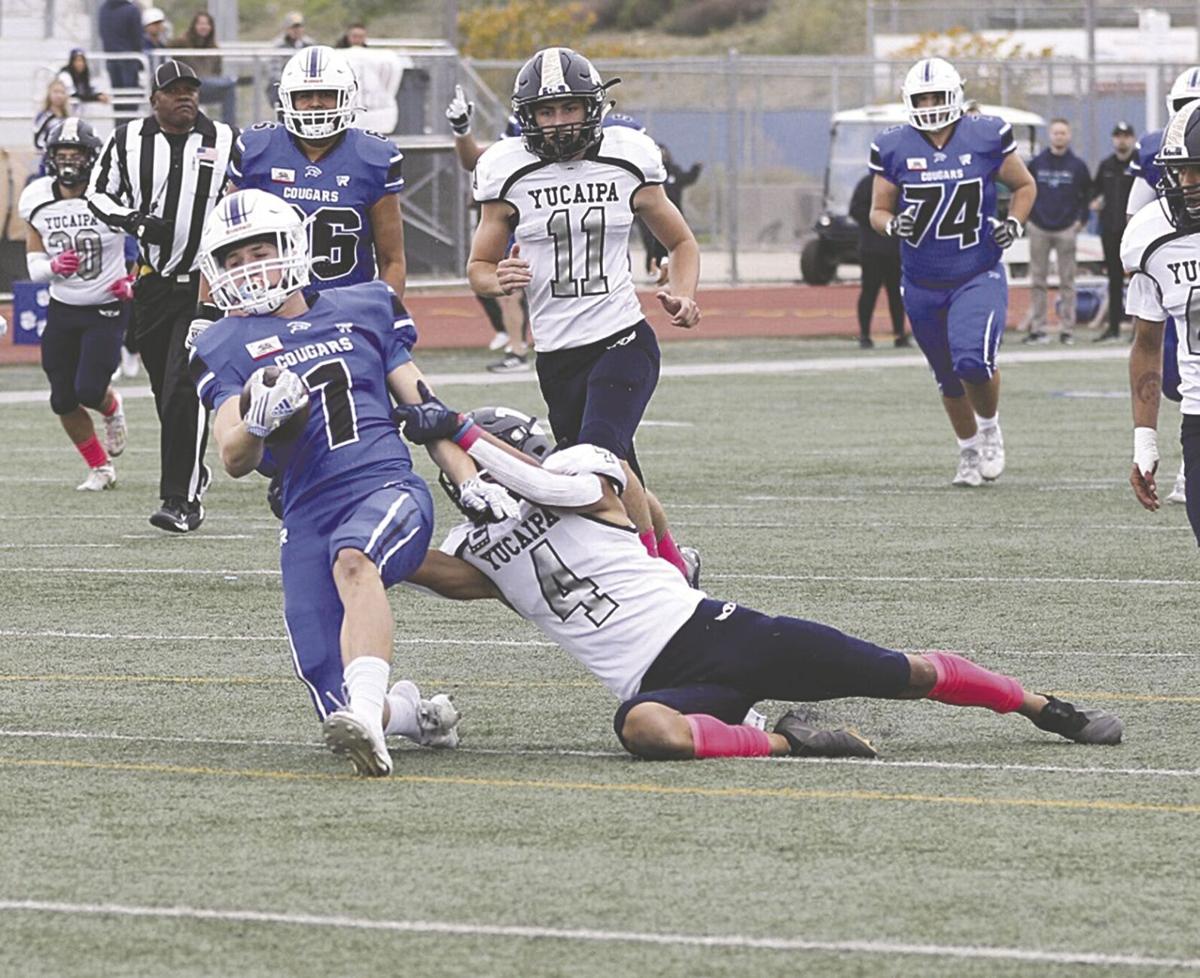 The game was originally scheduled for Thursday night, Oct. 21 but the change did not upset the Cougars who jumped out to a 29-0 halftime lead.

Beaumont swept down the field for touchdowns on its first four possessions. Sophomore quarterback Christopher Cooper (287 yards passing) was hitting his receivers and the Cougars scored on a 7-yard run by Cooper, a 4-yard jaunt on a reverse by receiver Gabriel Nunez, a 9-yard run by Cooper, and a 5-yard run by Armando Cuellar.

But a funny thing happened on the way to the would-be obliteration. Yucaipa fought back.

Beaumont could not stop Yucaipa senior running back Emmanuel “JoJo” Barajas who rushed for 244 yards on 31 carries. His hard running on Yucaipa’s first drive of the second half resulted in a 6-yard TD run by sophomore quarterback Albert Suarez. That made the score 29-6.

Then late in the third quarter, Marvin Hungerford intercepted a Cooper pass and ran it back 55 yards for a touchdown and Yucaipa trimmed the Beaumont lead to 29-13.

Mid-way through the fourth quarter, Yucaipa struck again, scoring on a 17-yard run by Nick Alonso for 28-19. But before Yucaipa fans could get too excited, Beaumont restored order. The Cougars drove 80 yards on six plays to score on Cooper’s 17-yard run to put the game out of reach.

“I give (Yucaipa) a lot of credit,” Steinberg said. “They saw some things and were able to attack us with their power run game. We made a mistake on a slant that should have gone to the weak side and got returned for a pick six that gave them a little bit of hope. But then I think offensively and defensively toward the end we made some plays when we needed them.”

On the opposite side of the field, Yucaipa senior two-way player Everett Head appeared to be in pain as he stood forlornly on the sideline. Head missed numerous games with a broken collarbone and was not at full strength against Beaumont, but he did his best.

“It felt good to help out the team,” Head said. “It was disappointing to lose but I’m proud of the guys; they fought hard.”

Yucaipa coach Justin Price said seven starters missed the game due to injury. Notable among them were receiver/defensive back/return man Timothy Monaghan and inside linebacker Iain Matheson who are both likely out for the season.

“We’ve had a ton of injuries the last four weeks,” Price said. “And we just didn’t show up in the first half. I don’t know what to do with this team because we had so many young guys in on defense. We got a couple of guys back (Friday) to try to play in a game who haven’t been able to play for three weeks.”

“Head isn’t close to being 100 percent. He’s a body out there trying to do the best that he can and what an admirable effort. Most kids wouldn’t put themselves in that situation.”

Head caught four passes for 39 yards and made six tackles.

Other Yucaipa players who returned from injuries and played sparingly were offensive lineman Troy Montgomery and defensive back Aiden Englert who is recovering from a separated shoulder.

Suarez showed flashes of ability at quarterback as he threw for 83 yards and ran for a touchdown. And Alonso rushed for 32 yards and a TD.

Cody Pritchard led Yucaipa with eight tackles, Evin Wrightstone had seven and Head and Dillon Best chipped in with six apiece. Tyler Price, Nick Juarez, and Andrew Uribe each had five tackles. Pritchard, Juarez, Uribe and Blake Atchley all had a quarterback sack.

“I thought we fought really well in the second half,” Price said. “I was happy about that. That was the best thing we did all day, not folding after going down 29-0.”

But that quick start by Beaumont could not be overcome. Cooper completed 23 of 30 passes, Nunez caught 15 passes for 158 yards and fellow senior Anson Kraut snagged seven passes for 112 yards.

Cuellar found enough daylight to rush for 101 yards on 16 carries and score once.

Afterward, the Beaumont seniors posed together for photos.

“It brings up a little bit of emotions, but it’s cool,” Nunez said. “It was nice to be able to play here on senior day and ball out.”

Nunez said his parents Edward and Jayme Nunez were in the stands to watch his last regular-season home game.

Yucaipa is scheduled to host Redlands East Valley at 7 p.m. Friday, Oct. 29 in its final regular-season game. Beaumont was slated to visit Citrus Valley on Thursday, Oct. 28 (too late for publication) in its regular-season finale.

And then there was one.

Golfers from across Southern California enjoyed a day of championship golf and prizes while raising money to support local youth at the 25th Annual Morongo Charity Golf Tournament, sponsored by the Morongo Casino Resort & Spa.

Think girls’ golf and Banning High is probably not the first high school that comes to mind.