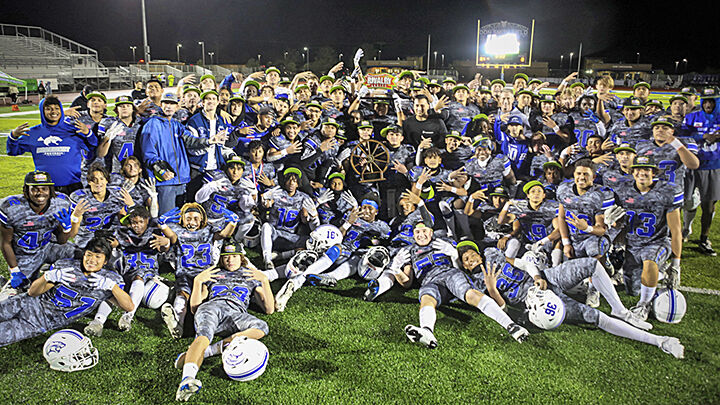 The Beaumont Cougars pose with their Battle for the Wheel trophy, which represents the oldest rivalry in Riverside County. 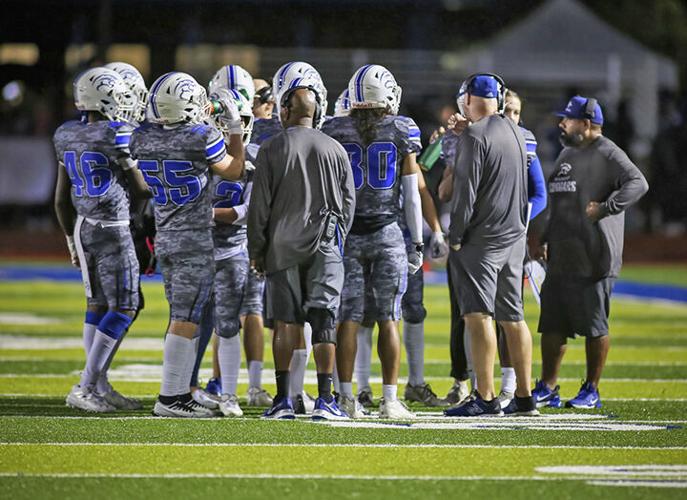 The Beaumont Cougars discuss strategy in a huddle. 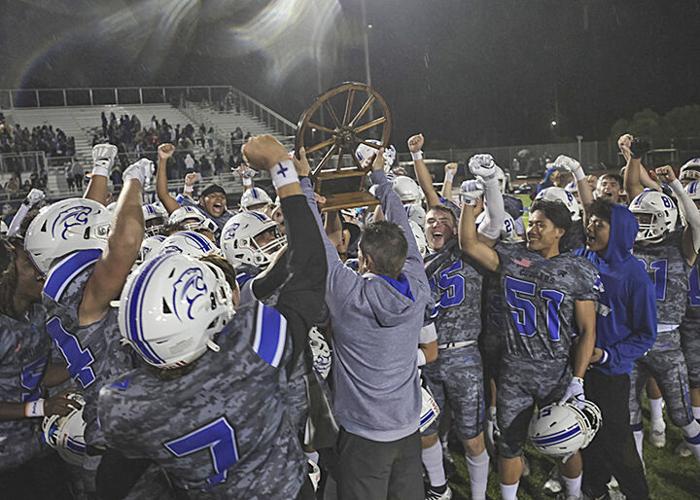 The Beaumont Cougars celebrate winning the Battle for the Wheel trophy.

The Beaumont Cougars pose with their Battle for the Wheel trophy, which represents the oldest rivalry in Riverside County.

The Beaumont Cougars discuss strategy in a huddle.

The Beaumont Cougars celebrate winning the Battle for the Wheel trophy.

Umbrellas and jackets were prominent as host Beaumont High faced rival Banning in the Battle for the Wheel football game on Friday, Sept. 9.

The game was the 96th in the rivalry, which is the longest in Riverside County. It is also listed as one of the nation’s Great American Rivalries, which provides a trophy to the winner.

Once again that victor was Beaumont, which defeated Banning 64-0. The Cougars have vanquished the Broncos six consecutive times, including by a combined score of 181-0 the last three seasons.

Following the victory, Beaumont players seized the stagecoach wheel that goes to the winner and posed for a series of photos.

In the past nearly 100 years, Banning has won 45 games overall, to 44 for Beaumont with seven ties.

Asked if he can see this rivalry continue given the one-sided nature of it lately, Beaumont coach Jeff Steinberg said, “It’s tough to say. In all fairness, there’s great history in this game, but the difference in the size of the schools is huge, and maybe this could be a way for [Banning] as well to find someone that’s a better fit.”

Steinberg said the schools were close in enrollment up until 15 years ago, but the explosion in Beaumont’s enrollment has made it a school with about five times as many students as Banning.

Beaumont dominated from the start, tallying on a 5-yard touchdown run by senior running back Armando Cuellar, a 1-yard run by Cuellar and an 11-yard scoring pass from junior quarterback Christopher Cooper to Sean Dyer following a Banning fumble.

A safety capped the first-quarter blitz as Beaumont took a 23-0 lead.

The wet weather and wind seemed to bother Banning (0-3), which struggled with errant and dropped snaps. But it didn’t seem to faze Beaumont.

“Well, it was the same on both sides of the field and it didn’t seem to bother them,” Banning coach John Tyree said. “Just about everything that could go wrong did go wrong. We’re a young team. We shouldn’t be playing [Beaumont].”

Asked if the Broncos will continue playing Beaumont every year, Tyree said, “It’s not up to me.”

Cuellar was named the game’s most valuable player after rushing for 32 yards on five carries and scoring two touchdowns. He scooted through gaping holes in the Banning defense.

Beaumont continued to pile up the first-half points. Jakobi Carter scored on a 6-yard run for 30-0 and added a 12-yard scoring run with eight minutes left.

DJ Littles had a weaving, 60-yard punt return for a touchdown.

The Cougars led 51-0 at half. The second half was played with a running clock.

It was an efficient night for Beaumont (4-0). Besides Cuellar’s contributions, Cooper completed 8 of 10 passes for 119 yards and a touchdown. Carter ran for 41 yards and two scores on five carries. And seven Cougars caught passes, led by Cleve Johnson with two grabs for 51 yards.

“It was nice to see our boys real focused going into the game,” Steinberg said. “Our [offensive] line got off the ball and I thought we had them well-prepared for tonight.”

Be true to your school

They turned out in force last week for the Redlands at Yucaipa girls’ volleyball match.

Tropical storm Kay may have delayed the tournament by a week, but the U.S. Tennis Association (USTA) 7.0 women’s team representing the Inland Empire League, led by team captain Michele Walter, played exceptionally well in the tournament rescheduled for Sept. 17 and 18 in Rancho Palos Verdes.

Math isn’t my long suit, but I recently noticed I’ve been in these parts 30 years.