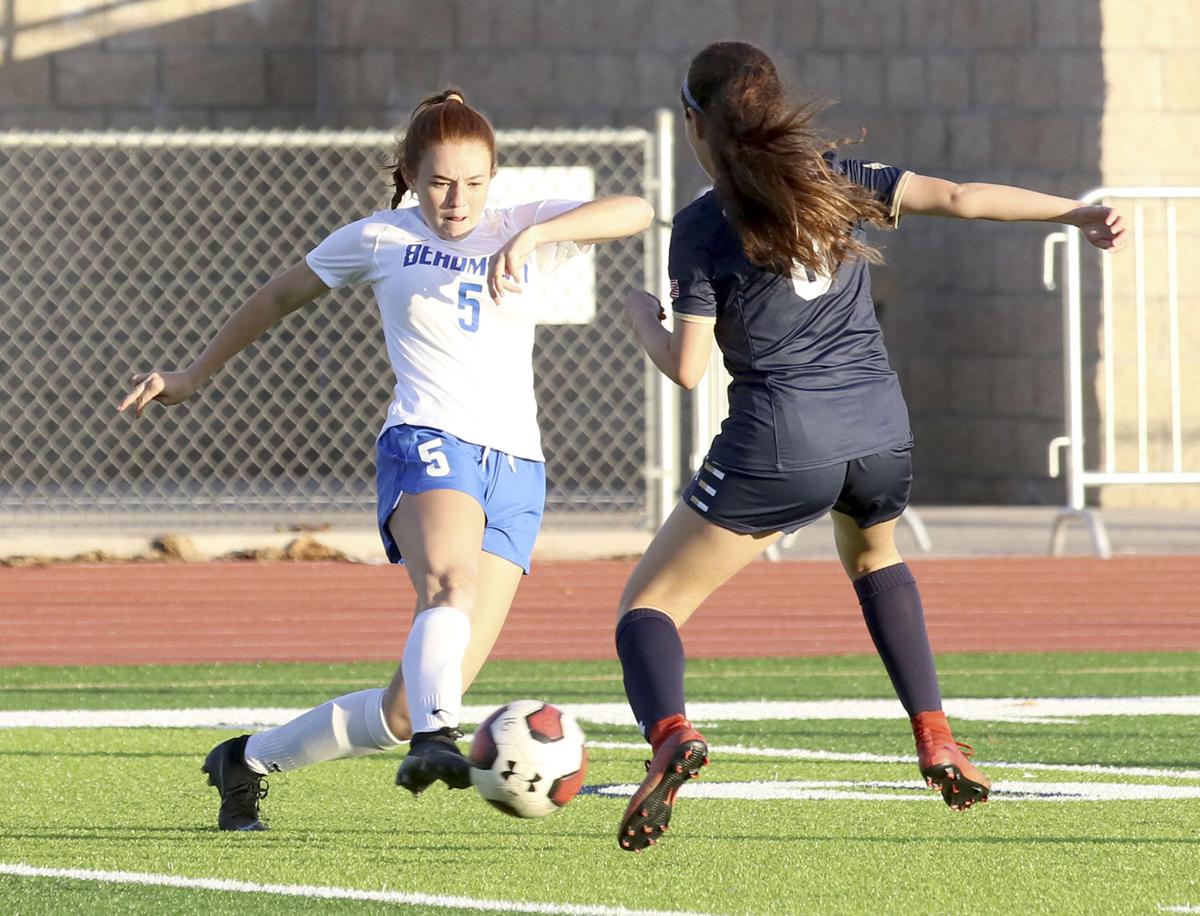 Beaumont defender Corin Jones passes the ball to one of her teammates, avoiding Yucaipa’s Thalia Avalos. Beaumont took the loss 4-0. 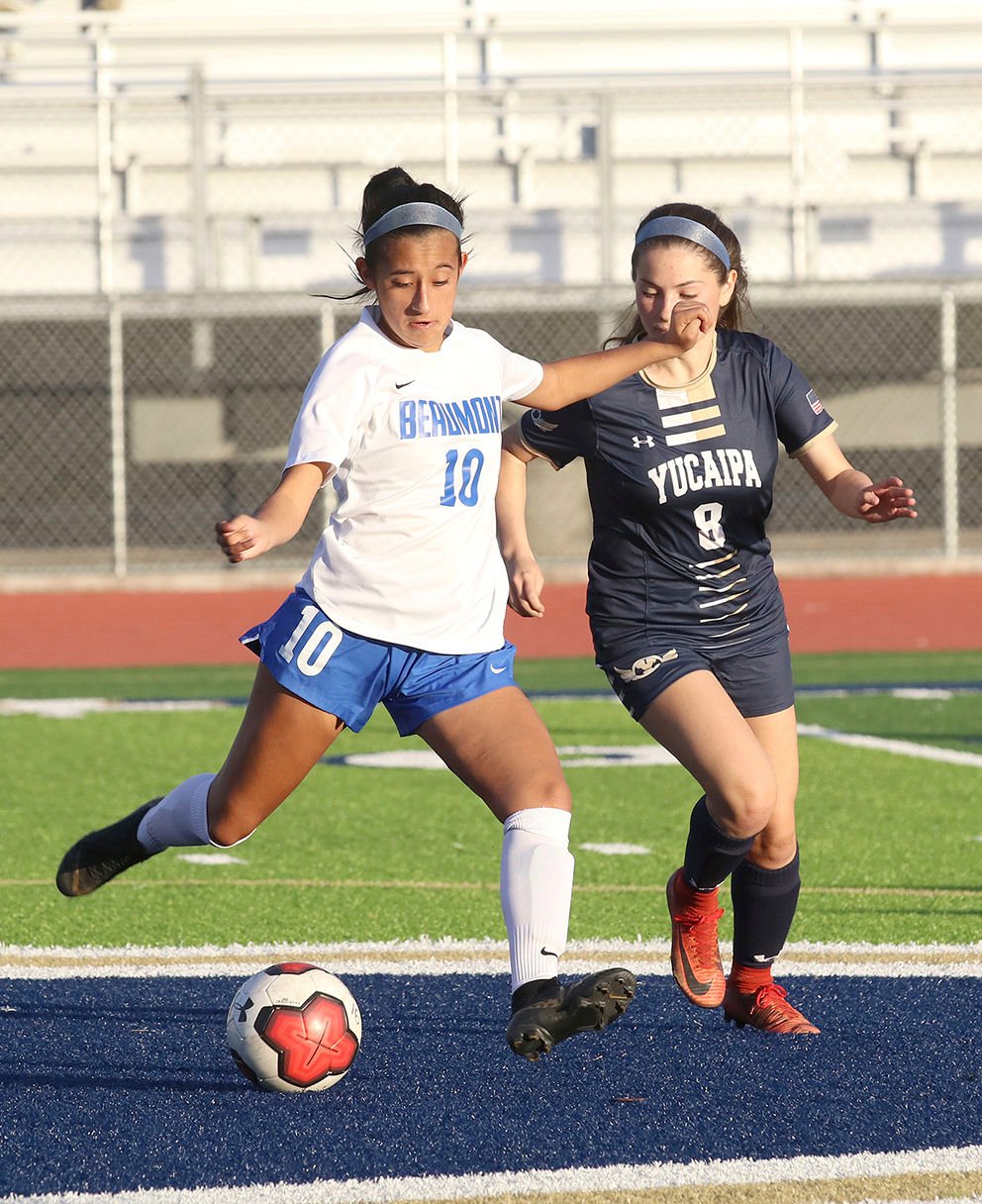 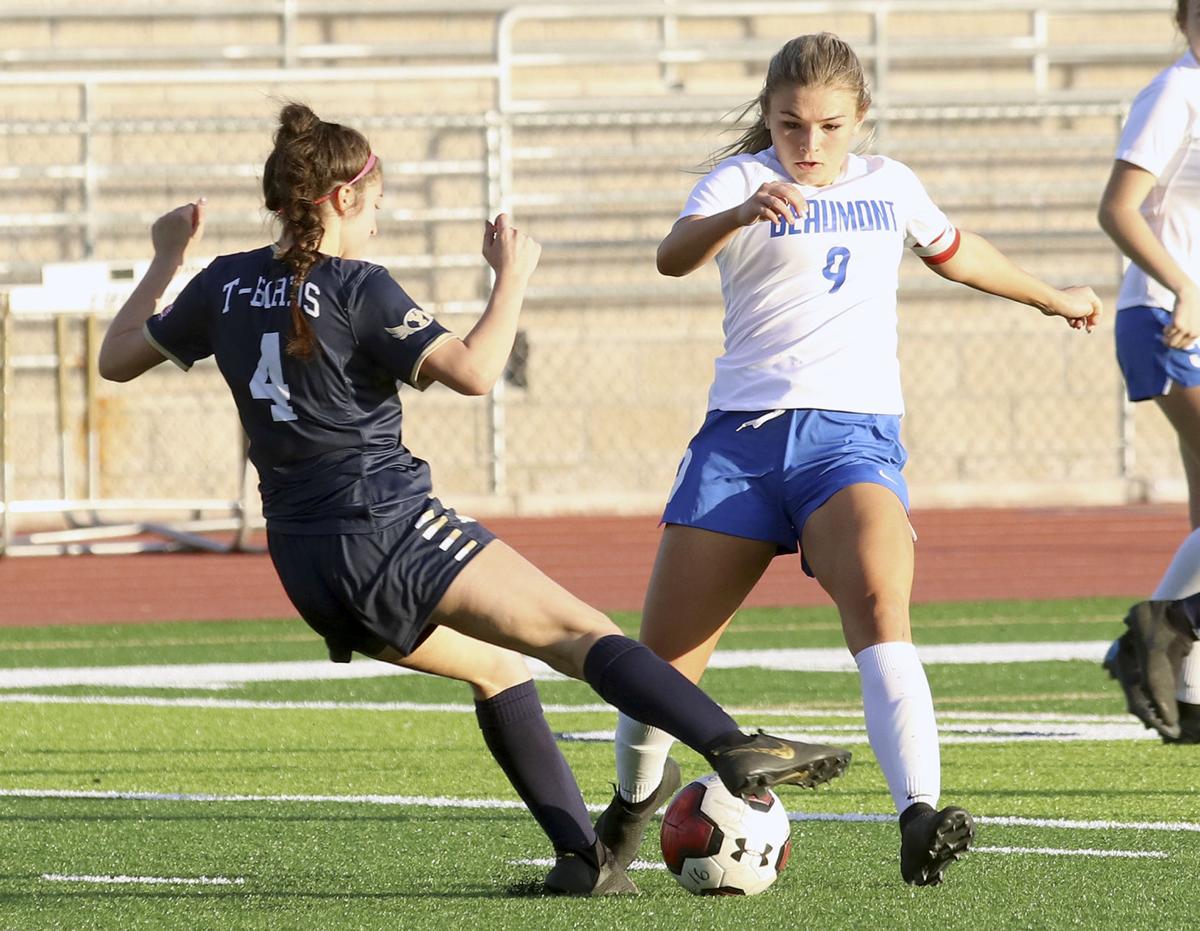 Thunderbird Marissa Cole is unable to wrest the ball away from Beaumont’s mid-fielder Hailey Jones.

The Cougars were unsuccessful in achieving a victory during their away game.

Beaumont lost 4-0 to the Thunderbirds.

Before the game, Beaumont’s girls’ soccer coach Julio Reyes was not sure of how the game would end.

“This is our first game against Yucaipa,” Reyes said. “I can’t compare the strength of the team.”

From the opening whistle, the Thunderbirds were aggressive with their passing and communicated well with each other.

Yucaipa’s coach Sarai Stamper was pleased with how her team was performing.

“They are using teamwork,” Stamper said.

“They’re playing together. They are not being selfish.

“The team is scoring because they are playing as a united group.”

Stamper thinks that the rivalry with Beaumont is fun.

“These girls are playing skilled soccer, on both sides,” Stamper said.

“They’re (Beaumont) a good team. They’ll be in our league next year.

“I believe they will be a contender in a season or two.”

The Thunderbirds scored their last goal near the 25-minute mark in the second half.

The score would have been greater if it were not for Beaumont’s goalkeeper Elaine Contreras.

She prevented several attempts at the net throughout the game.

Beaumont had a little more than a dozen supporters in the stands.

Jewell Mitchell was one of them.

She comes to watch her granddaughter play.

“I’ve been to every game she’s played from ninth grade to now,” Mitchell said.

“Kayla Oldenburg is my granddaughter.

“The girls work well as a team.”

“In the beginning, we came out too confident,” said Madyson Cornish, a defender for Beaumont.

“We had some errors and we didn’t take advantage of their (Yucaipa’s) mistakes.

“We could have shot more, when the ball was close.

“The defense shifting could have been better in the first half.”

“They (Yucaipa) wanted to win the game more,” Reyes said, after the game.

“Yucaipa was good at distributing the ball and winning the 50/50 balls in the air, which helped them earn a few goals.”

That is, Yucaipa was more efficient at securing the ball when two players met the in the air.

“Yucaipa did a good job. They came out wanting the win,” Reyes said.

Reyes said he had to adjust the players in mid-field for the second half of the game.

He felt that the move was an effective strategy.

“We shut them down more, in the second half,” Reyes said.

“As a coach, it’s good to see the bench players make a difference on the field.”

“I’m telling the starters, you need to step up, or someone can take your spot.”

Reyes was so impressed with his bench players in the second half that he is going to start some of them at the beginning of the season.

Beaumont plays in the Mountain Pass League, but will be competing in the Citrus Belt League next year.

“We will be in their [Yucaipa’s] league next year,” Reyes said.

Reyes thinks his team can be competitive in the new league.

“We won and tied a game against Citrus Valley. Our name seems to be out there, so we’ll see what happens,” Reyes said.

Beaumont’s Marissa Hernandez, sidelined due to an injury, thought her team might do well.

“Our defense is playing better this year,” Hernandez said. “This is Julio’s second year at Beaumont. He understands us a lot more. He’s doing a great job, and we’re playing more like a team,” Hernandez said.