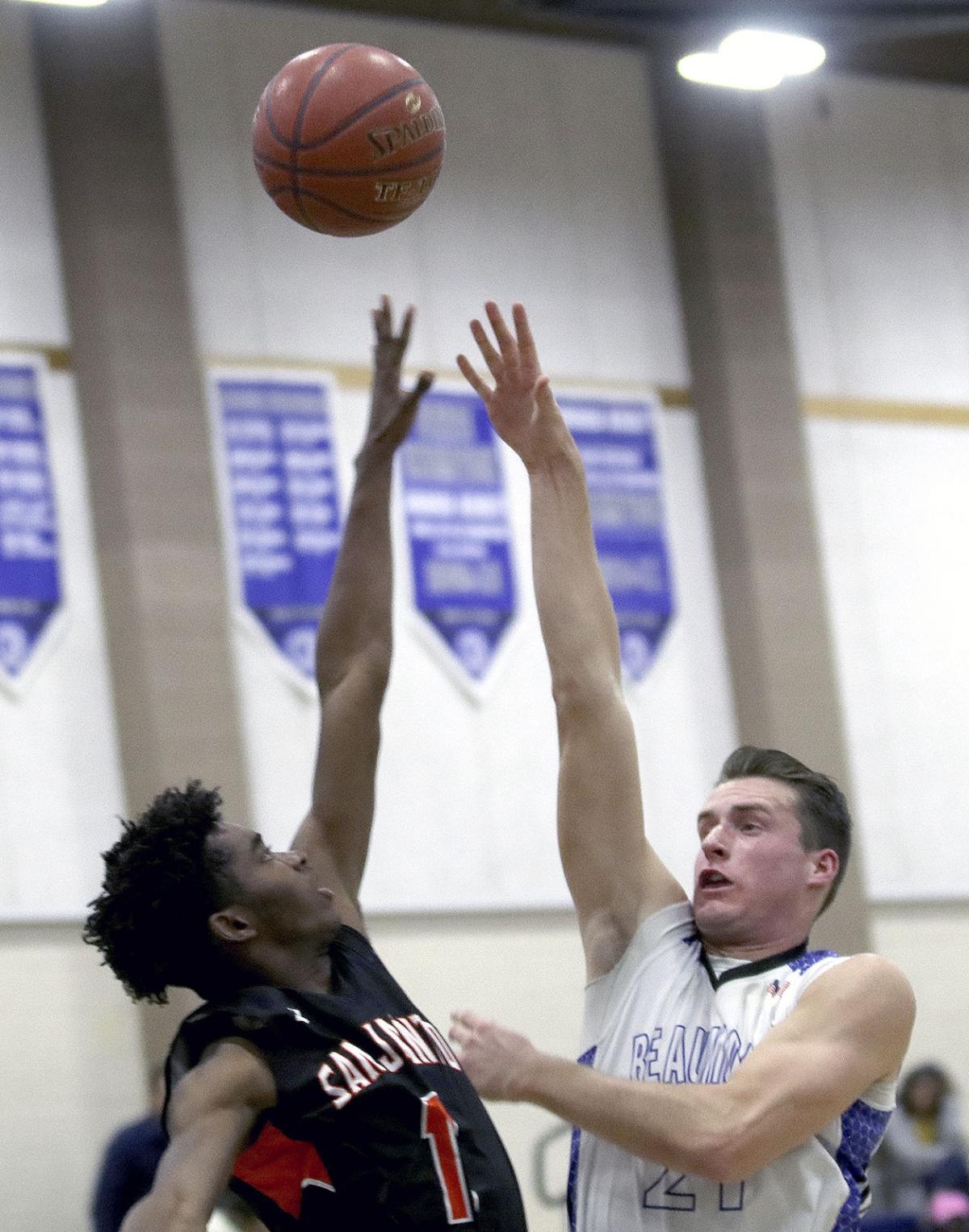 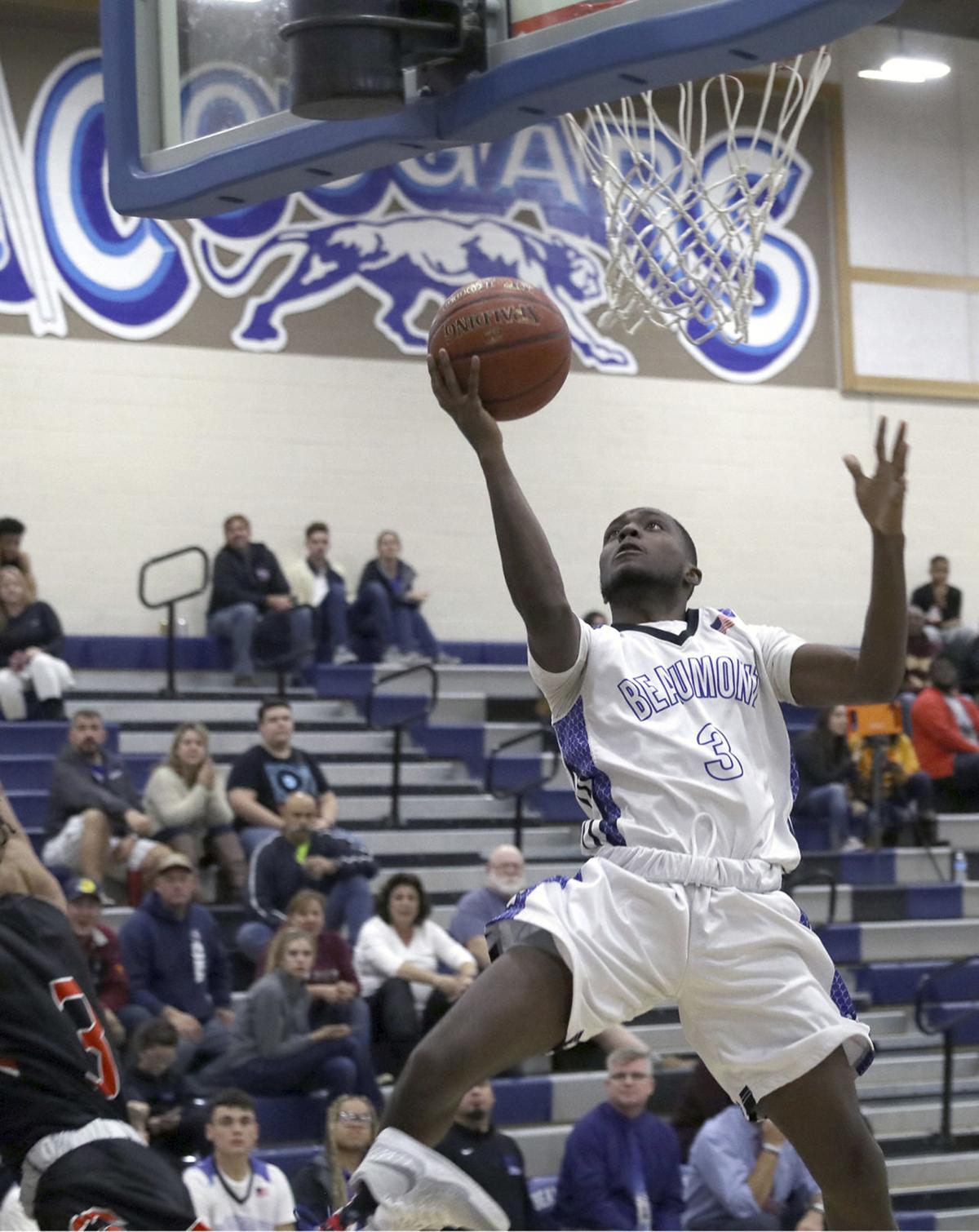 Cougar Kamari Ross is all air, as he puts two in from the sky. The Cougar’s beat the Tigers in double overtime, last Tuesday. 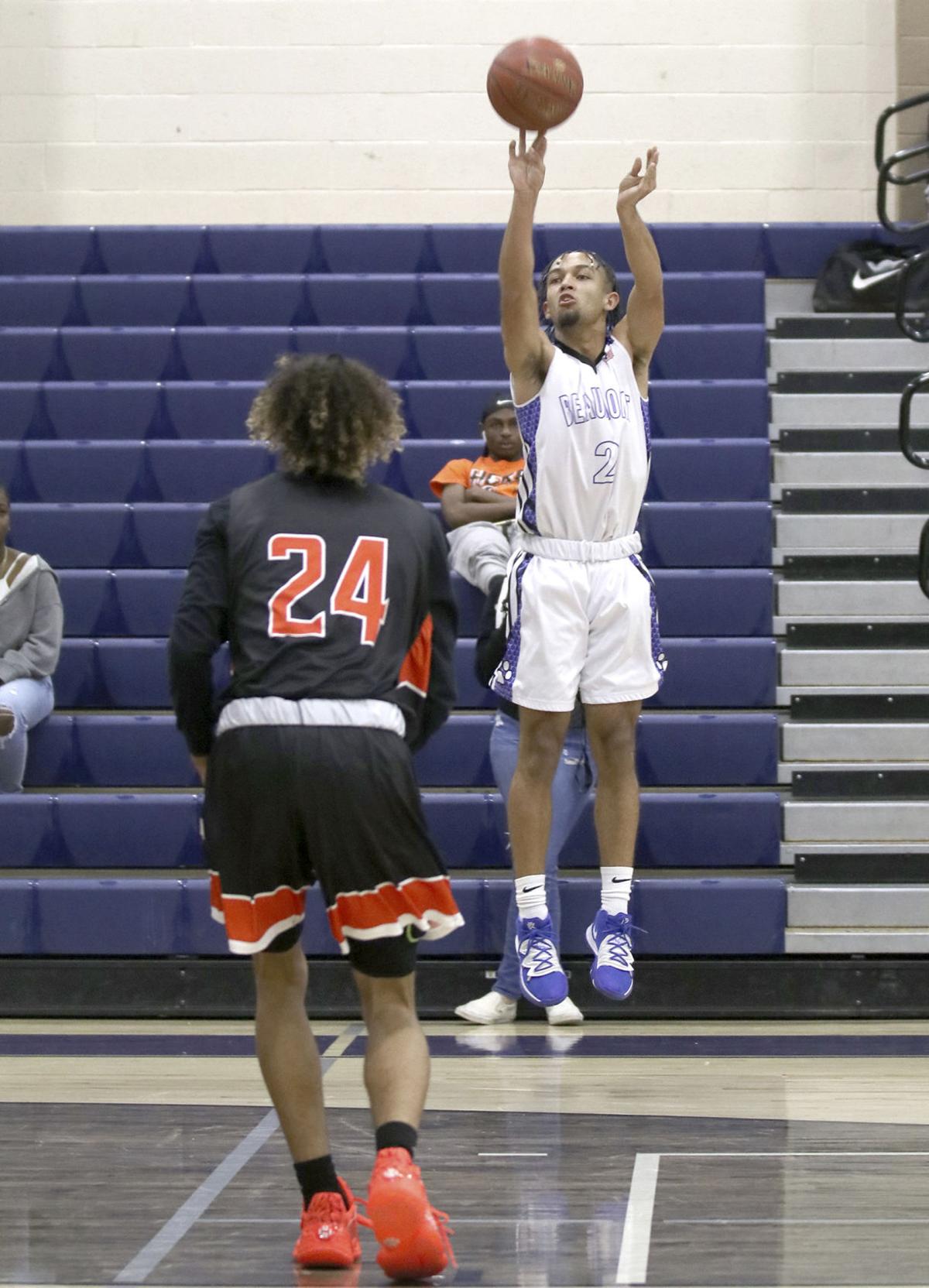 A double overtime game ensued, with the Cougars finally prevailing with a score of 76-72.

The energy coming from the fans and teams was palpable. The Tigers seemed to be the underdog coming into the game.

Before the home conference game, Tiger’s point guard Antoine Sullivan thought the game would be intense, but doable.

“Our team is pretty athletic,” Sullivan said. “We can compete with pretty much anyone.”

Sullivan continued, “We’re hoping to take this game to start us off on the right path.”

Throughout the game, and during the overtime periods, the Cougars executed their fundamentals to maintain their edge over the Tigers.

From the start San Jacinto appeared to be more assertive and athletic in their play.

This allowed them to reach from behind when it mattered. The score at the end of regulation was 57-57.

Four minutes were added on the clock for overtime play. As tension filled the air, both teams locked the board with a score of 64-64.

The gymnasium was filled with screams and shrills of excitement.

During the second overtime period, it was evident that the Tiger’s ferocity that they previously displayed was diminishing — They were running out of steam.

Their physicality, however, allowed them to continue to that point.

Beaumont’s center Austin Sims was on the receiving end of fouls during the second overtime.

This allowed the Cougars to capitalize on those mistakes by earning points from the free throw line.

San Jacinto could not muster the energy to cap off the game.

The game might have belonged to San Jacinto had it not been for those fouls.

Beaumont’s coach believed that the Tigers should have won. He said the Tigers played better overall and out-shot his Cougars.

“We didn’t do very well,” said Beaumont head coach Jon Florence. “They played hard and they played better than we did.”

Florence believed that their stamina wore down at the end.

“We were able to make a few free-throws to ice it, but we need to play better than that if we want to compete for a league title.”

“They did very well, sticking to the game plan,” said Moise.

Moise believes that faith among his players was a key factor in his team not winning the game.

“Most importantly, they need to trust each other and their team,” Moise said. “They did that tonight, but unfortunately, it took two overtimes and they got winded at the end, and they didn’t finish strongly.”

Moise believed that his Tigers could have won at the end of regulation and at the end of the first overtime period. In retrospect, Moise was happy with the outcome.

“We were very excited about this game, actually,” Moise said.

“Last year they beat us by 40, and it took two overtimes for them to beat us this year, he said. “We’re confident in our way of playing, and we are looking forward to them when them come to our house.”

The stats of the game speak for themselves, with the Tigers having 12 steals over the Cougars’ eight.

Antoine Sullivan was effective for the Tigers during the fast break and his steals.

Beaumont dominated rebounds with 53, over 43 for the Tigers. Field goals, free throws and assists were almost the same on both sides of the court.

Beaumont’s Kamari Ross walked away with 7 points, two assists and three rebounds to add to his statistics.