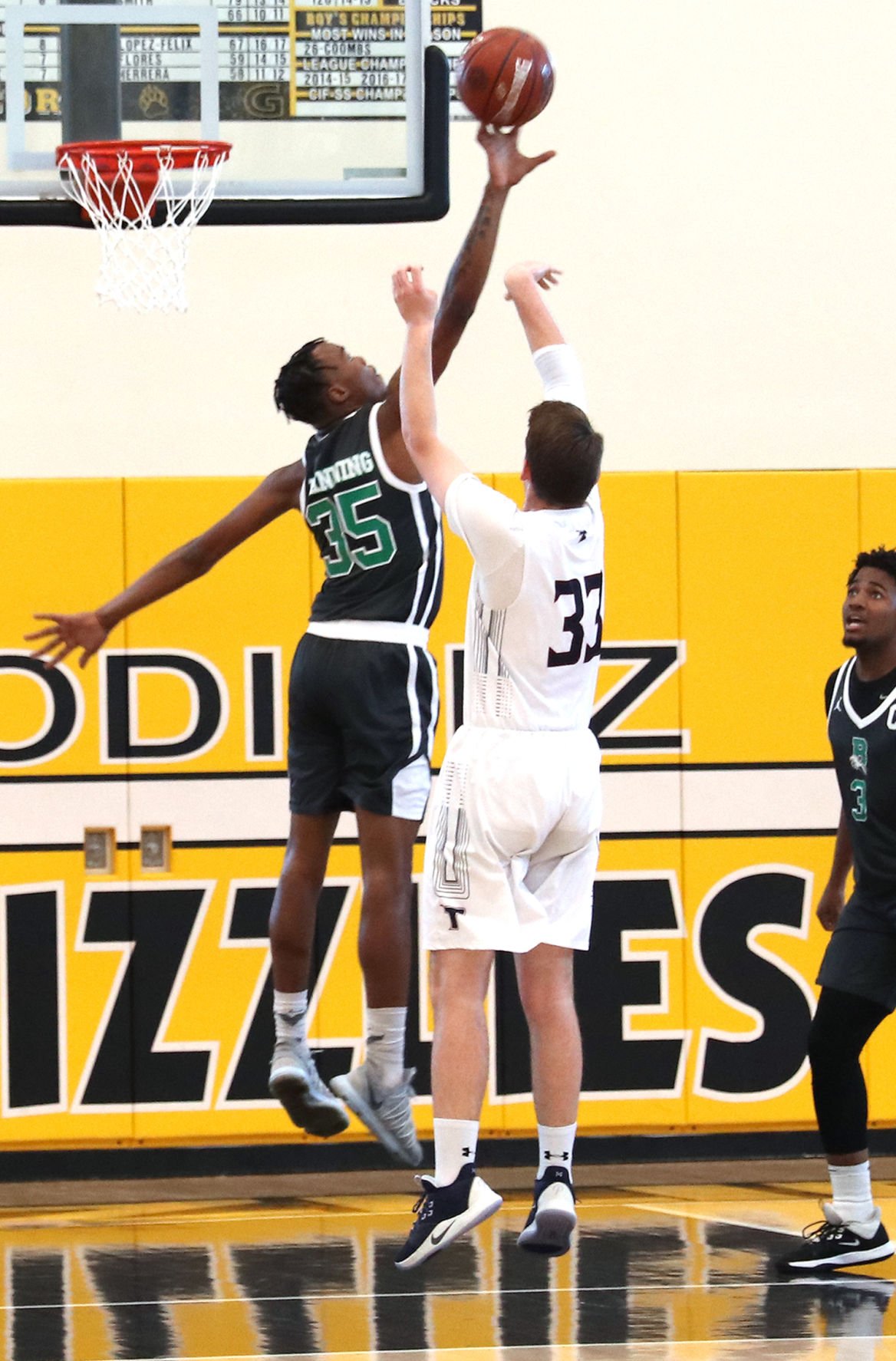 Extreme defense-Banning's Keon Mitchell vaults in the air blocking one of many attempts to score by TCA during the Bronco's CIF title win last Saturday. 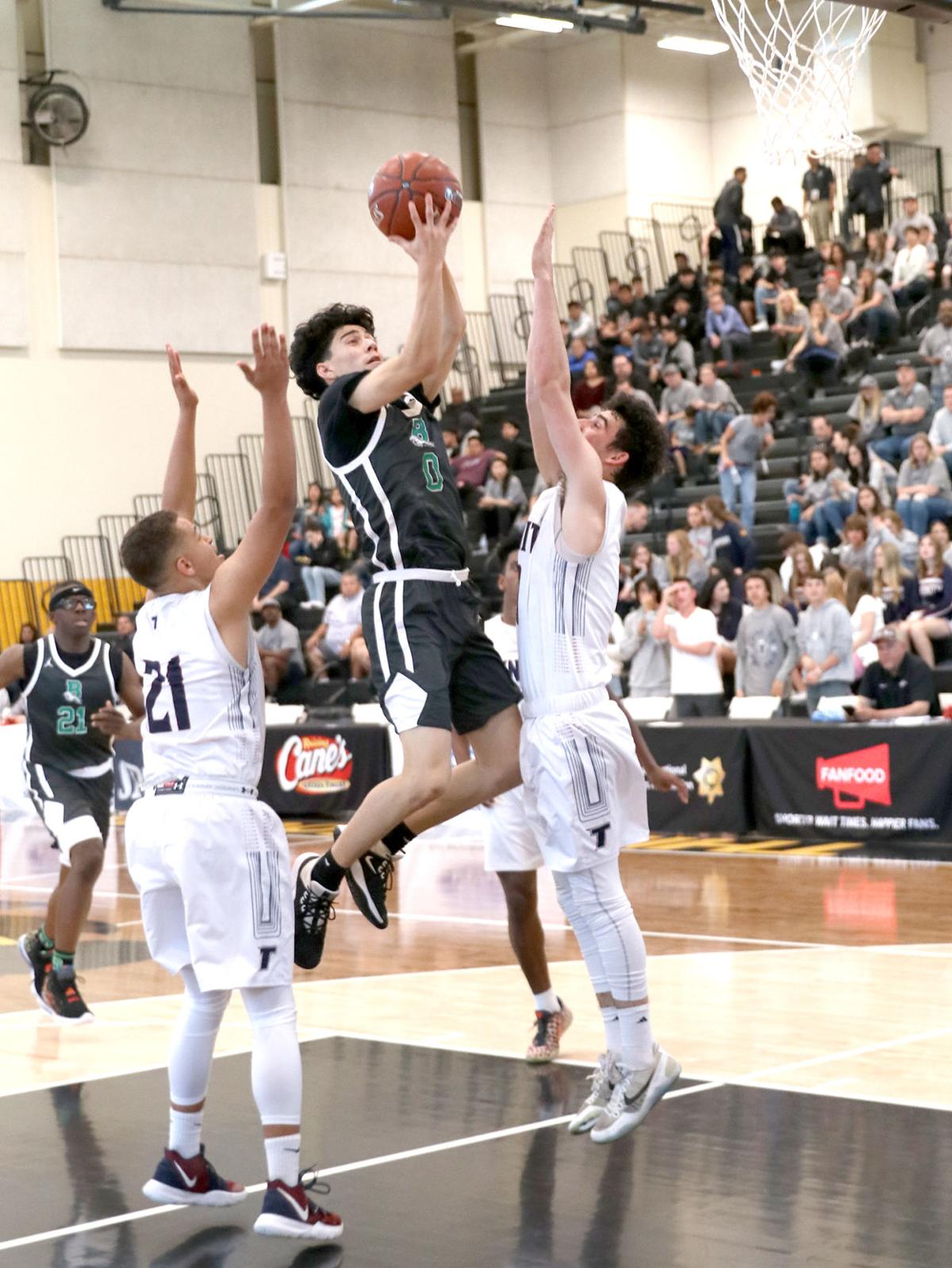 Bronco Richard Espinoza delivers two of his eight points as he breaks up the middle during the Bronco's 48-43 win over the Knights of Trinity Classical Academy. Banning is now the CIF SS Division 5 Champions. 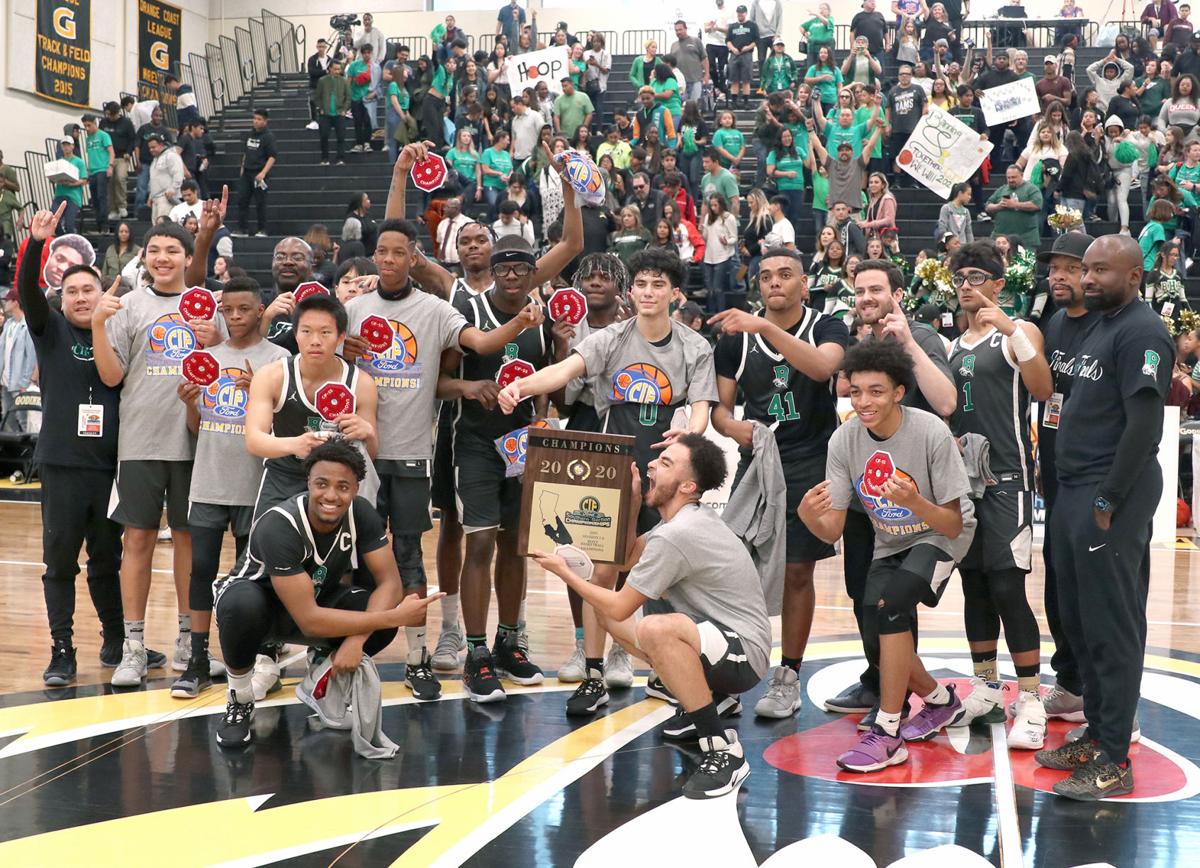 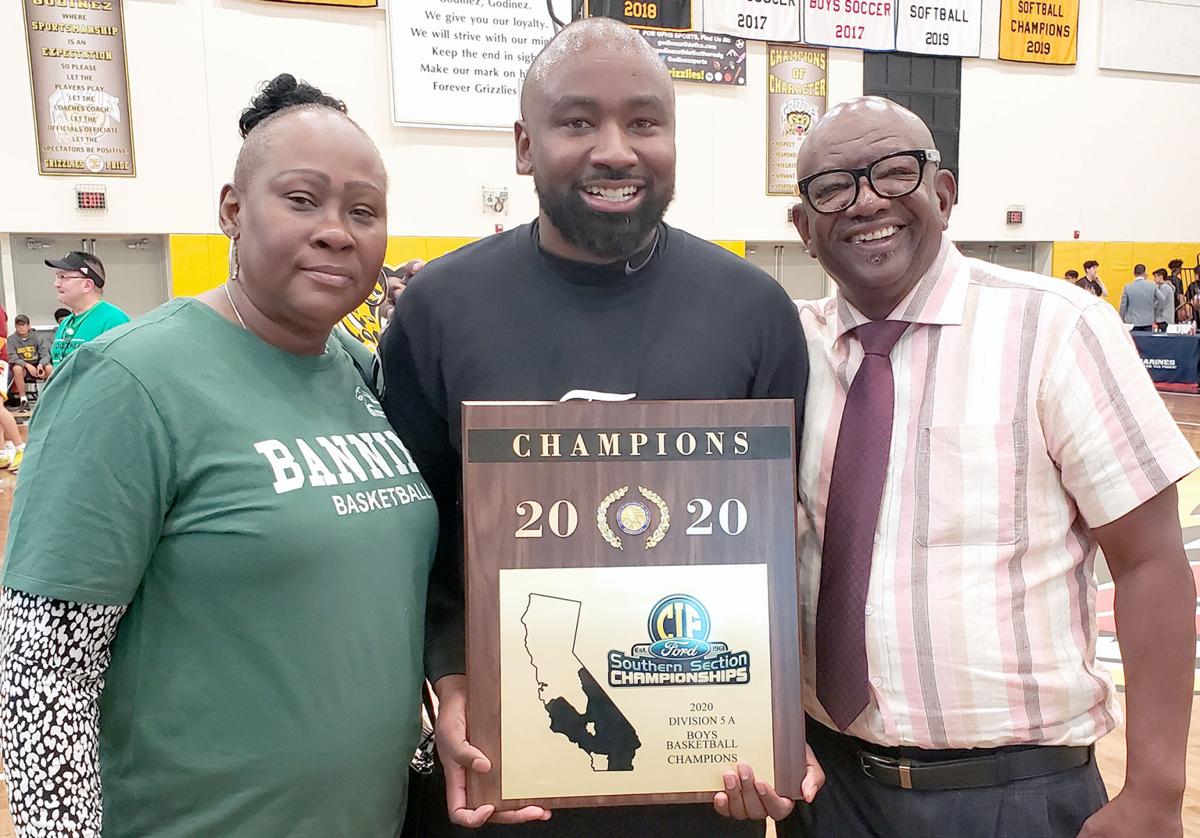 Banning head coach Cory Cornelius celebrates his CIF victory with his mother and father after his Broncos defeated the Knights last Saturday. 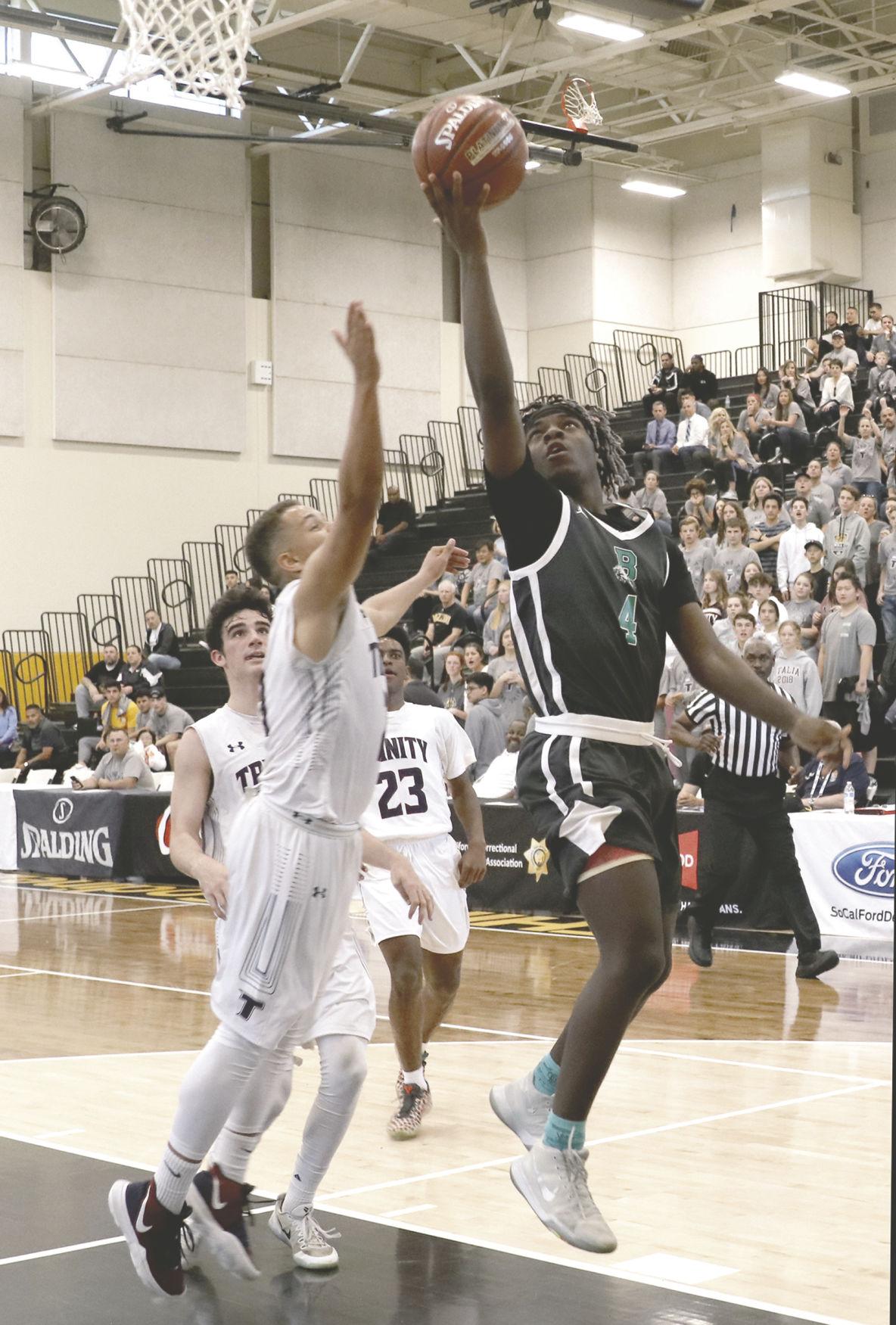 Bronco AJ Anderson goes up for two in the fourth quarter. The Broncos won the CIF SS Division 5 Championship against the Knights of Trinity Classical Academy.

Would their hard work and determination pay off?

Throughout the season Banning was considered least likely to succeed in their division. They were winless just two years ago, after all.

Each win for the Broncos became a stepping stone that culminated in the championship title game for Division 5 against the Knights of Trinity Classical Academy of Valencia at Godinez High School in Santa Ana.

The afternoon belonged to the Broncos. Banning won the championship with a score of 48 to 43.

Defense was the name of the game once the first second ticked on the game clock.

The Broncos were full press the entire game.

They had man-to-man coverage preventing TCA from seizing any advantages to score.

The end of the first quarter ended in single digits.

Jittery shots were intercepted or tapped away by both teams.

Samuel Scott of Banning sank a 3-point shot with less than five minutes in the first quarter.

When covering his opponent, Scott would shout at the player to distract him. This seemed to be effective.

Bronco Aaron Howard was the target of several fouls. He managed to complete two of his free throws.

Banning freshman Leonard Jackson came into the game late in the first half.

He made an entrance.

At one point, Jackson jumped high and smacked a potential basket by TCA, as if to say, “Not in my house.”

Throughout the game, Keon Mitchell of Banning delivered the goods.

He consistently blocked attempts at the basket and yanked rebounds.

As the battle for the title pounded on the floor, Banning’s marching band, cheer squad and families provided an exorbitant amount of noise over the chants of the supporters for TCA.

TCA attempted a comeback by decreasing their deficit to two points, with Banning at 45 to TCA’s 42 points with 27 seconds left in the game.

Looking confident, the Broncos finished the game with the same intensity that they started by winning the game 48-43.

In the end the Broncos bested the No. 1 and 2 seed basketball teams.

Some of the Banning players believed that an adjustment in the ranking was in order.

This is a milestone for Banning High School.

It is the for first CIF-SS title for the school since 1988.

“We played hard. They were coming back at the end, but we still pulled it off.

Howard believes that the Broncos had a better advantage when the Broncos shut down TCA’s Kyle Fields, their top three-point shooter.

“When we stopped number 21, they couldn’t do anything,” said Howard. “Once we took our number 21, we knew that no one else would shoot.”

“No one ever expected that we would go this far. Tonight, we put it all on the floor and we did it.”

Callender said they win games in the fourth quarter.

“We knew that the fourth quarter is always our quarter. We had to hold them. We had to lock down their shooter and we did that.”

He did not appreciate the ill comments made by TCA days before the game.

Regarding rankings, Scott had something to say. “Our ranking should be number one.”

“We beat the number one and number two seed. We should be number one.”

“I don’t believe that the game was ever in jeopardy,” said Banning head coach Cory Cornelius. “We had confidence going into the game. Teams haven’t seen a defensive team like ours before.”

Cornelius believed that it took perseverance, a plan and support from the entire team and coaches to achieve this victory.

He commented that the team has put Banning on the map as a competitive contender.

“You did it together,” said Cornelius told the team.

“Each of you guys accomplished this. This is your championship.”

Richard Espinoza, Keon Mitchell and Amari Callender amassed 50 percent of the points for the Broncos collectively.

Each of those players scored eight points each.

Against all odds, the Broncos of Banning remained steadfast in their quest to be No. 1 and they have earned privilege to carry the banner of being the CIF-SS Division 5 Champions.

Next up: state championships. At the time of print, Banning won their first round matchup against Valley Torah High School in Burbank 58-42. The Broncos journey continues in round two Thursday, March 5, at 7 p.m. at Eastside High School in Lancaster.

Six members of the Sun Lakes Tennis Club traveled to Orlando, Fla. in early February to represent Sun Lakes Country Club and the city of Banning in the U.S. Tennis Association’s Nationals Competition.

Broncos beat Valley Torah in the first round of state tournament playoffs, loses to Eastside High in second round

After securing their CIF championship in the Southern Section Division 5, the Banning Broncos hit the road to meet up with the Wolfpack of Valley Village on March 3.

The city of Beaumont will pay $10,000 to become a sponsor of the upcoming Symetra golf tour taking place March 27-29 at Morongo Tukwet Canyon Golf Course in Beaumont.