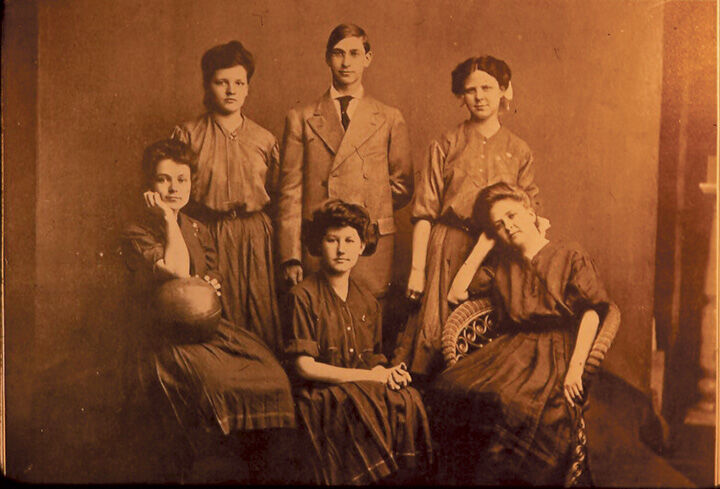 In the early-1900s Redlands High girls played basketball in ankle-length dresses and were coached by a nattily attired student. 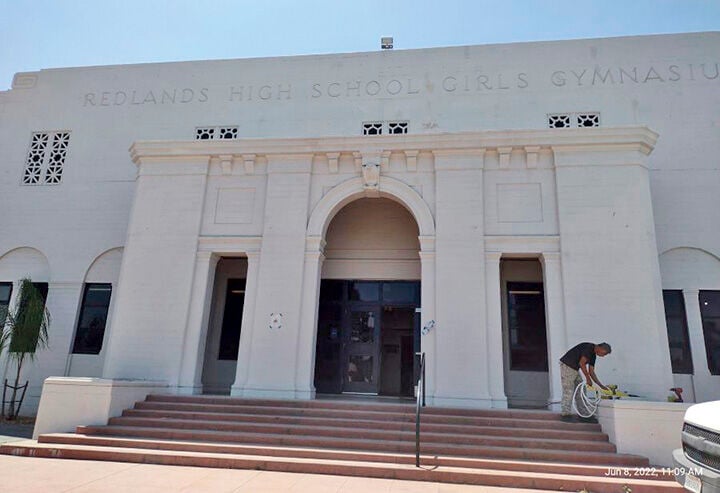 The stately Redlands High Girls Gym stands in the middle of the campus. 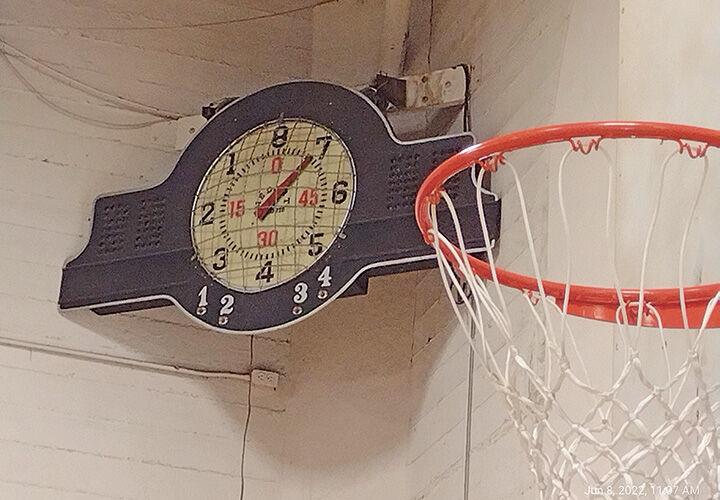 The antique game clock in the Redlands High Girls Gym no longer works but will not be removed. 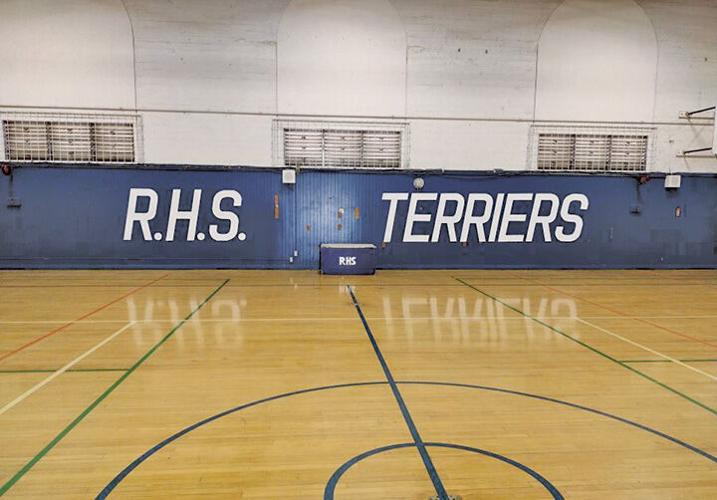 The court in the Redlands High Girls Gym bereft of decoration but high on character.

In the early-1900s Redlands High girls played basketball in ankle-length dresses and were coached by a nattily attired student.

The stately Redlands High Girls Gym stands in the middle of the campus.

The antique game clock in the Redlands High Girls Gym no longer works but will not be removed.

The court in the Redlands High Girls Gym bereft of decoration but high on character.

Standing regally in the middle of a bucolic campus and bathed in white, is the Redlands High School Girls Gymnasium.

Completed in December of 1936, the edifice is a testament to a bygone era. It conjures images of girls in long dresses dribbling the ball three times (and no more) before passing. That was decades before the shot clock, the 3-point shot, and Title IX.

Title IX was the gender equity law passed in 1972 that, in part, increased the participation of girls and women in athletics.

Back in June, former Redlands High athletic director Estevan Valencia led a tour. It revealed a stately outer building with graceful steps and arches. And a dripping-with-character inside that showed the ancient clock with the second hand, the eight rows of bleachers upstairs and some doors and walls that could clearly stand a new coat of paint.

“We had the middle schools here last week,” Valencia said at the time. “The basketball championships were played here. They really enjoyed it. Obviously, this place needs some love. We’re trying to work on getting it repainted and re-done.”

Redlands High School was founded in 1891. It is the oldest public high school in the state still operating on its original grounds. The campus is full of old buildings, including the Clock Auditorium built in 1928 and the Girls’ Gym finished eight years later.

Trophy cases in the foyer tip off the gym’s age. There is a golden cup from a Military Carnival in 1919 and one from a 1947 decathlon.

Inside is the plain light brown court, the relic of a game clock, and the modicum of bleachers with windows above. Close your eyes and you can almost see Jimmy Chitwood in the movie “Hoosiers,” sinking a game-winning shot for Hickory High.

“The Redlands High Girls Gym was ahead of its time,” said former RHS teacher and historian Tom Atchley. “It was a Works Project Administration project and they poured concrete six inches at a time. They used sunlight to light the gym and so the west side of the building has windows.”

The cost of construction was only $105,496 since the WPA utilized unemployed skilled laborers during the Great Depression.

It was a different time. In 2011 historian Atchley told the Riverside Press-Enterprise that in the 1930s “girls were considered dainty flowers of society. They had old-time rules. Back then people were afraid too much exertion would (hinder) their ability to have children.”

That spawned the “three-dribble” rule that limited the times a girl could dribble before passing.

Ironically, in this 50th anniversary year of Title IX, there was furor on the part of the Redlands High boys after Girls Gym was built.

“It caused quite a disturbance because in those days the boys had to play at the Redlands YMCA,” Atchley said. “The school board thought that because the girls were using the locker room area and getting dressed and undressed, that it was not appropriate for boys to be in the same place.”

If that sounds extreme, consider that in the 1930s Redlands was a conservative place with older folks on the school board. Dances were not even allowed on campus until after World War II when the mores of society relaxed a bit.

Redlands High boys were so upset at not being able to use the gym that they staged a walk-out, retreating for three days to the Redlands Bowl. It was not until school district superintendent Henry Clement promised to plead their case to the school board that the boys returned to class.

“I heard about that protest and it’s funny because here you’ve got 50 years of Title IX and then you have [gender equity] in a different way with boys wanting to use the gym,” Valencia said. “And if I’m not mistaken, this was the only functioning gym we had at the time.”

In 1961 the more spacious Terrier Gym was built. But the old Girls Gym still holds underclassmen volleyball matches and practices and some physical education classes.

“It has a nice, homey feeling,” Redlands volleyball player Saniyah Sobers said. “I like the big gym [Terrier Gym] because it has air conditioning and ventilation, but the old gym has a traditional feel.”

Athletic director Valencia has moved on to a similar job at Palm Desert High School, but he has fond memories of Redlands High — and its antiquated Girls Gym.

“I always say that it seems like the gym where they filmed the Nirvana video, ‘Smells Like Teen Spirit,’” Valencia said with a laugh. “I told some guy that the other day and he believed me. I had him going for about five minutes. Everybody who comes on this campus is amazed by this gym.”

The Works Progress Administration (WPA) was a work program created on May 6, 1935 with the signing of an executive order by President Franklin D. Roosevelt and funded by the Congress-approved Emergency Relief Appropriation Act of 1935.

A part of Roosevelt’s New Deal, the program was meant to alleviate the economic hardships of the Great Depression by creating jobs with the construction of public projects and the sponsorship of art projects.

The program was renamed Work Projects Administration in 1939 and was shut down in June 1943 as war production lifted the economy and unemployment fell to less than 2 percent.

Girls sports not ‘glanced at’ any more

Researching a project on Title IX, the gender-equity law of 1972, was fascinating.

Golf academy focuses on mental aspects of the game

Nestled in a back corner of Beaumont’s Oak Valley Country Club is the Jerry Wong Golf Academy. Familiar to few locally, the golf academy draws students from around the world thanks to a program that has helped lead several students to success in the worlds of college and professional golf.

Antiquated girls gym and the protest it caused

Standing regally in the middle of a bucolic campus and bathed in white, is the Redlands High School Girls Gymnasium.

Girls sports not ‘glanced at’ any more

Researching a project on Title IX, the gender-equity law of 1972, was fascinating.

Women’s pioneer Barbara Grainge has seen it all