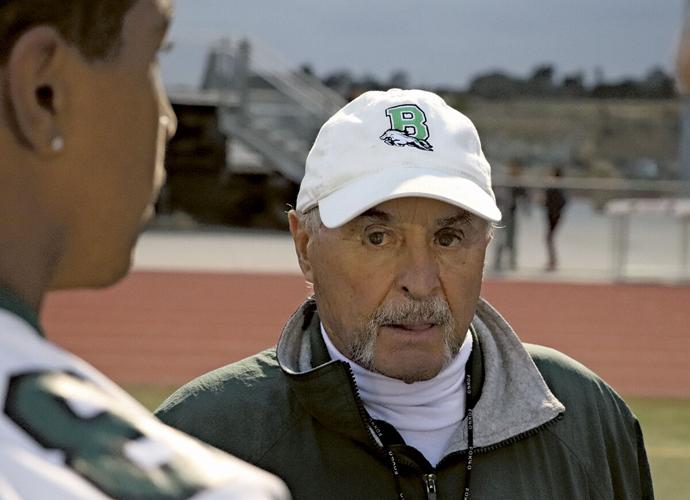 John Tyree, 83, of Redlands returns for another season as the Banning High football coach. 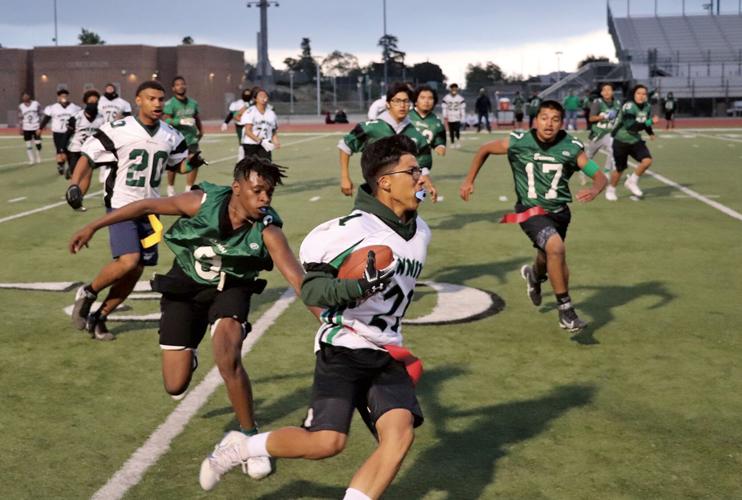 Joe Caudill, a transfer from JW North High of Riverside, picks up yards for the white team.

John Tyree, 83, of Redlands returns for another season as the Banning High football coach.

Joe Caudill, a transfer from JW North High of Riverside, picks up yards for the white team.

The topic turns to the nearby San Jacinto Mountains and naturally Tyree, a Redlands resident, has a story. Until 2014 the Twin Pines Ranch for boys who ran afoul of the law was up there and it had a football team.

“I was coaching Blythe, and we had a hell of a team,” the octogenarian Tyree said. “But there was a drug bust and five of our kids wound up at Twin Pines. They went 10-0 and we wound up 5-5.”

Chann and I laughed, and then I said to Tyree, “You coached at Blythe?

“I been everywhere, coach,” Tyree says. “I’m like that old country song.”

At 83 years old, it does indeed seem like Tyree has been everywhere. He is thought to be the oldest head football coach in state history, according to Mark Tennis of Cal-Hi Sports.

A bit of a maverick and a master of reclamation projects, Tyree kick-started the Fontana High football dynasty of the 1970s and ‘80s with a successful run from 1974 through ‘76. He also thrived as the A.B. Miller coach in the late-1990s and early-2000s. Recently he transformed a winless Calexico team into a San Diego Section playoff entrant.

That’s in addition to assisting at a slew of small colleges in Texas and his native Oklahoma -- including helping pro football Hall of Famer Slingin’ Sammy Baugh coach the freshman team at Oklahoma State.

“We had the nation’s leading punter and he’d kick one and then Sammy who was 50 years old would say, ‘Gimme the ball’ and he’d boom one 60 yards,” Tyree said.

An hour before the scrimmage, Tyree holds court in the Banning locker room. Dressed in a windbreaker and tan pants, he scribbles plays on a white board with an orange marker. His players munch on bags of Doritos and Lay’s chips that assistant coach Joe Leogrande brought.

“I’d better not find paper on the floor,” Tyree warns.

Leogrande of Cherry Valley played for Tyree at Fontana in 1974. He’s helping his old coach at his wife’s urging.

“I put on my Oklahoma hat and came down here,” Leogrande said. “John’s an Oklahoma State guy. I told my wife that if he can recognize me after 47 years, then I’ll help him coach. So I stand on the sideline in my Oklahoma hat and I’m watching him for 10 minutes and he finally says, ‘Leogrande, take off that damned Oklahoma hat.’ And so here I am, coaching.”

Asked what it’s like assisting the legend, Leogrande said, “It’s a blessing. He has a passion for the game and a sharp mind. And he really cares about the kids.”

The Broncos went 2-7 last season, but they have potential. They are a delightful melting pot of ethnicities and characters.

“Here’s the quarterback [Salomon Nicolas],” Tyree said to me shortly after my arrival. “He got a girlfriend and she’s like an appendage. Everywhere we go, she’s there. You know what Confucius says, ‘Love is a lack of judgment.’”

Nicolas can run and pass and drips with talent. But when he fires a spiral six feet over a receiver’s head during the scrimmage Tyree says, ‘Good God, he can’t hit a bull in the [rear] with a bass fiddle.’”

There’s also Marquis Vaughan, a talented sophomore quarterback who is deaf in one ear. And don’t forget Kadence Tamez, a rising senior defensive end and running back. Tamez had 10 quarterback sacks last season in a victory against Desert Mirage.

“He’d knock out a quarterback and they’d put in a new one and then he’d knock that guy out too,” Tyree said with a laugh.

Flags fly. Turnovers abound. But Nicolas fires a 40-yard touchdown pass to Junior Donahoo and a 25-yarder to Tamez.

Running back Miguel Carrasco bolts for a 15-yard TD for the Green. But it's not enough to stop Tyree's White team from winning 14-8.

“Well, we got something to work with,” Tyree says as we leave the field. “I think we can win five or six games this year. Four, at least. Or maybe three. Definitely more than two.”

The joys, the trials and rewards of running

Three at a time they ascended the podium at Beaumont High to receive their awards.