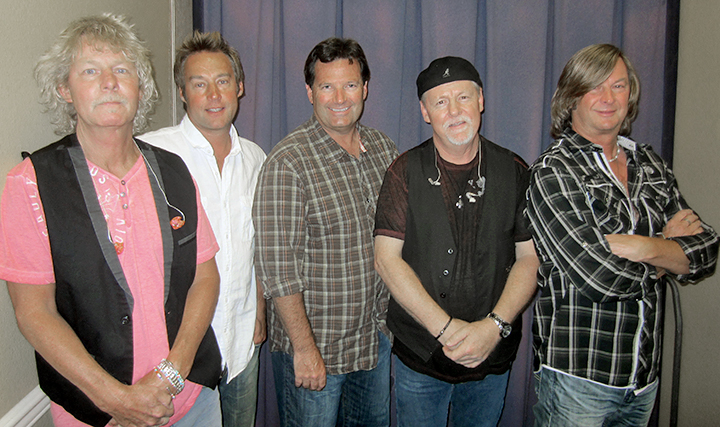 The band opens with "Take It Easy."

The band opens with "Take It Easy."

The Eagles are one of the world’s most prolific bands. No American band sold more records (over 150 million) than the Eagles during the 1970s. Unless you have lived under a rock for the past 40 years, you have undoubtedly heard most of their hits like One of These Nights, The Long Run, Take It To The Limit, New Kid in Town, or Life in the Fast Lane. And if you’re a child of the 70’s like me, you probably remember all of the lyrics too.

It takes a lot of talent to pull off the vocals and musicianship of Glenn Frey, Don Henley, Joe Walsh, and Timothy B. Schmit, but Southern California’s Premier Eagles tribute band, Desperado showed Sun Lakers they have what it takes.

On Saturday June 14, the group performed in the ballroom to a sold out crowd who showed their appreciation with wild applause and standing o’s for the five band members who cranked out Eagles hits with uncanny precision.

The packed house erupted in cheers when the concert opened with the 1972 hit, “Take It Easy.” Running through The Eagles discography, Desperado hit them all and did them well. From their tight a cappella harmonies on “7 Bridges Road” to the wah-wah pedal guitar licks and vocals of “Rocky Mountain Way,” these boys were impressive. When they struck the first chords of “Already Gone” a crowd of dancers spontaneously rushed the front of the stage from the audience. It was 90 minutes of fun and nostalgia that ended with the definitive “Hotel California” and finally of course, “Desperado.”

Aaron Broering founded the group in 2001 and spent years recruiting musicians who have traveled the world performing with The Beach Boys, David and Sean Cassidy, David Ruffin of the Temptations, Sam Moore of Sam & Dave, and with Eagles Timothy B Schmit, Don Felder, and J.D. Souther. With Desperado, he has compiled the right combination of performers including Kevin O’Connell on drums, Chris Farmer on bass guitar, Ricky Lewis who plays lead guitar and sings all of the Joe Walsh vocals; and newest member Kerry Chester, described as their all-around utility player who played on keyboard, rhythm and guitar.

These musicians have honed their skills and boast an “all live presentation”. No backing tracks or samplers are used in their show. Desperado truly challenged the audience to tell the difference between what they played live and the original recordings.

If you missed the concert, you can catch Desperado locally on June 27 at the Longshadow Ranch Winery in Temecula, on December 19 at Spotlight 29 Casino in Coachella, or perhaps with any luck and a little persuasion, our Recreation Department will bring them back next summer!

On Feb. 6 Banning Police Department received a report that Rene Leonel Robles Cerna of Banning had been sexually assaulting a special needs woman over a period of several years.