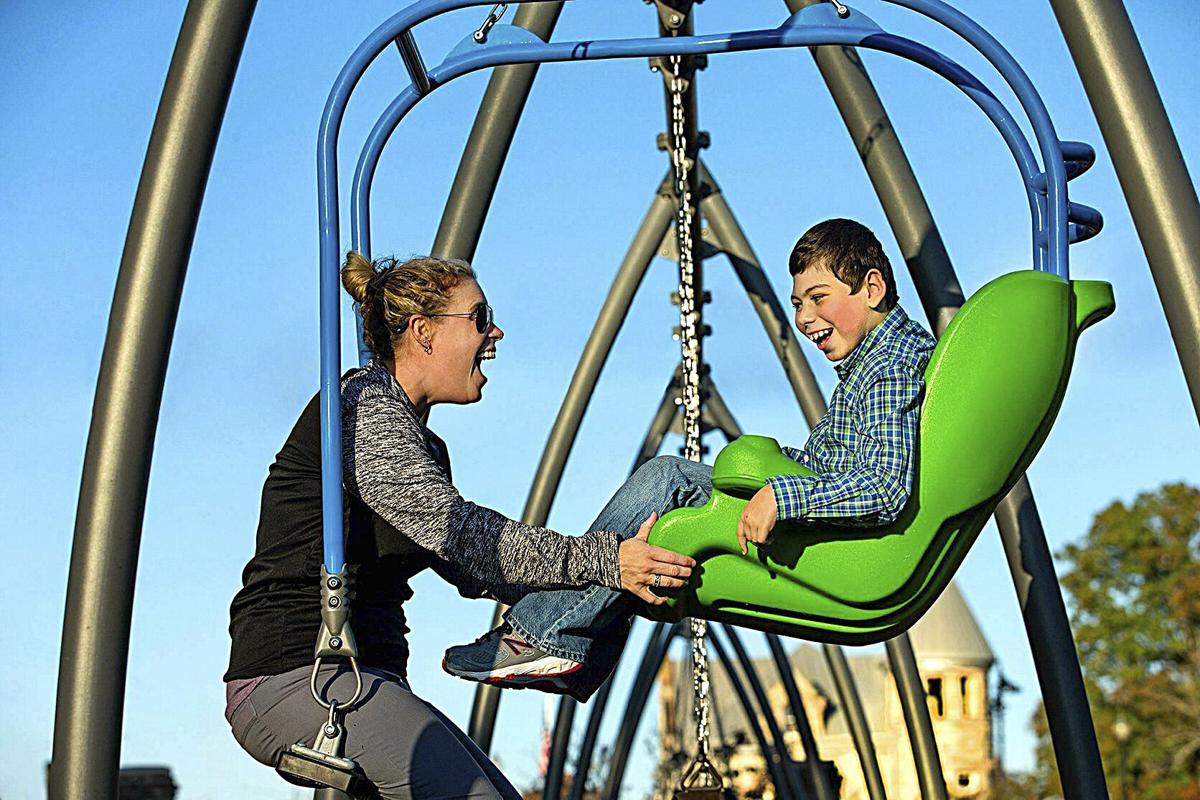 An example of a multigenerational swing. 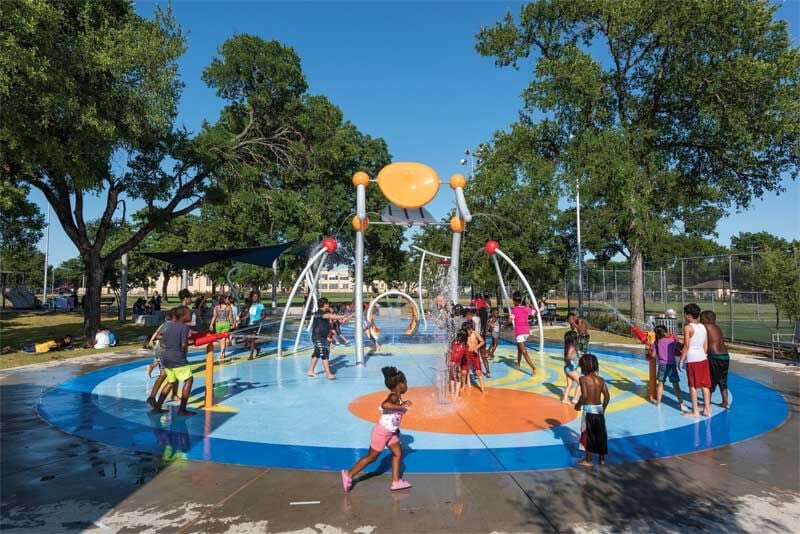 An example of a splash pad. 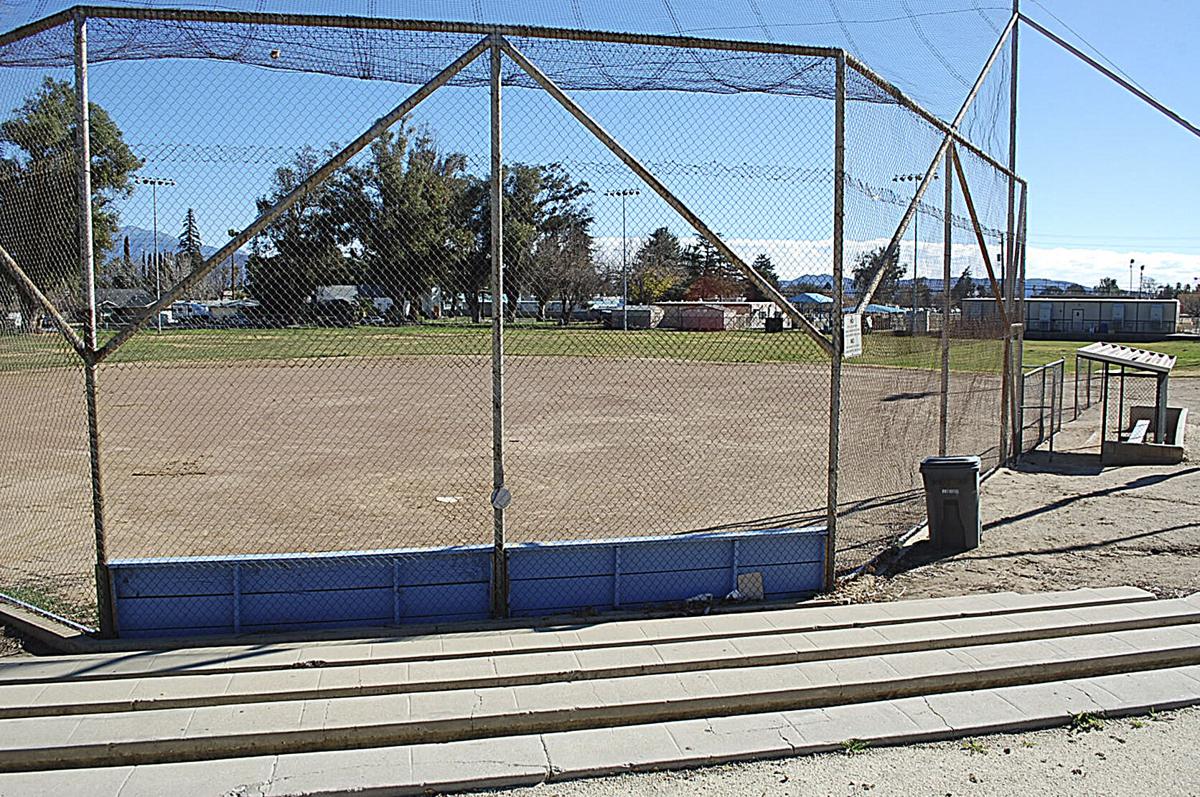 The ball field at Stewart Park. 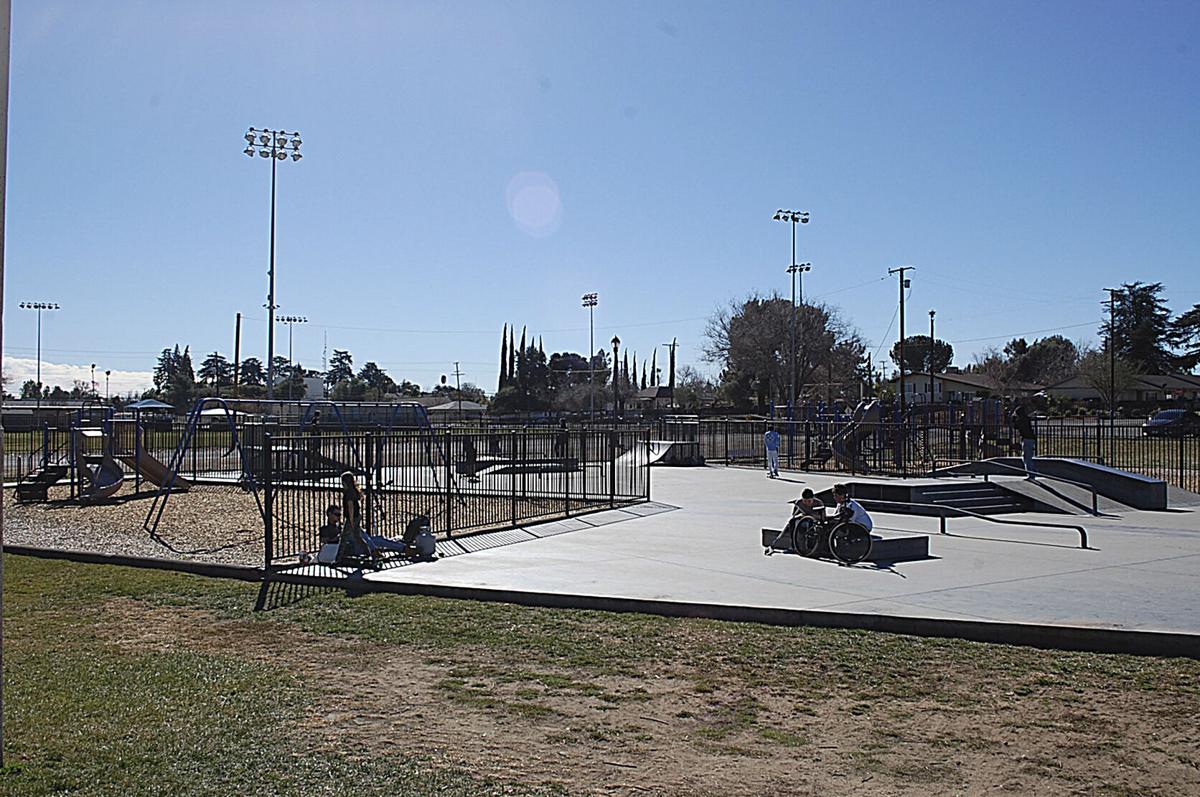 A playground and adjacent skate park at Stewart Park will be replaced. 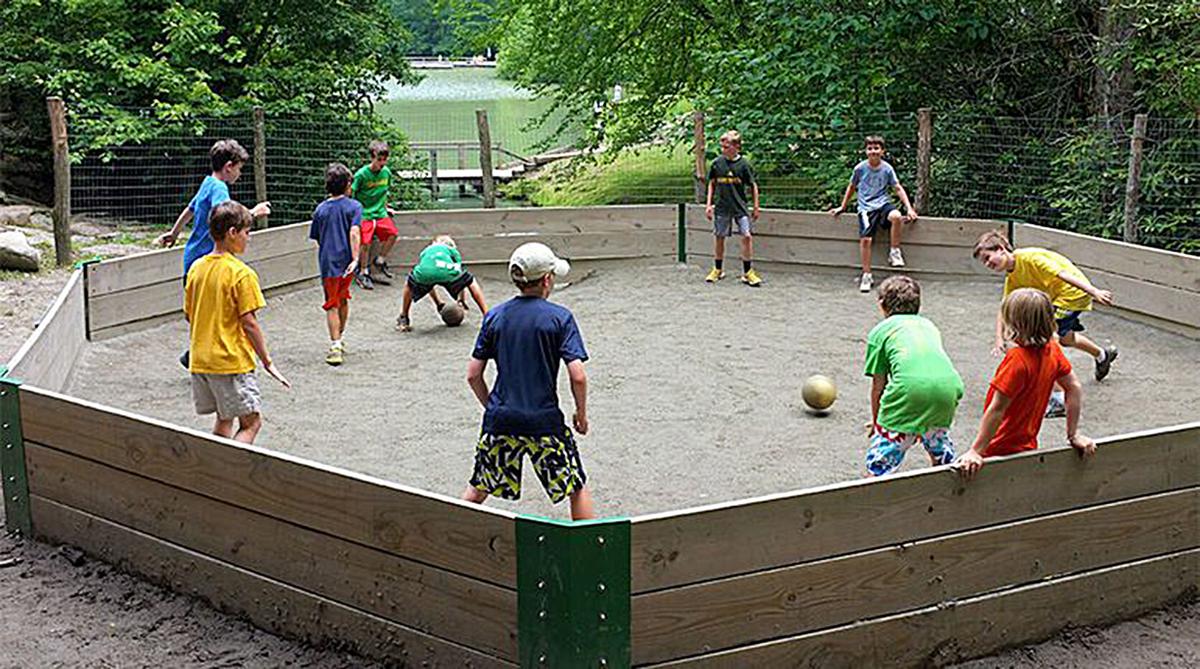 An example of a gaga pit. 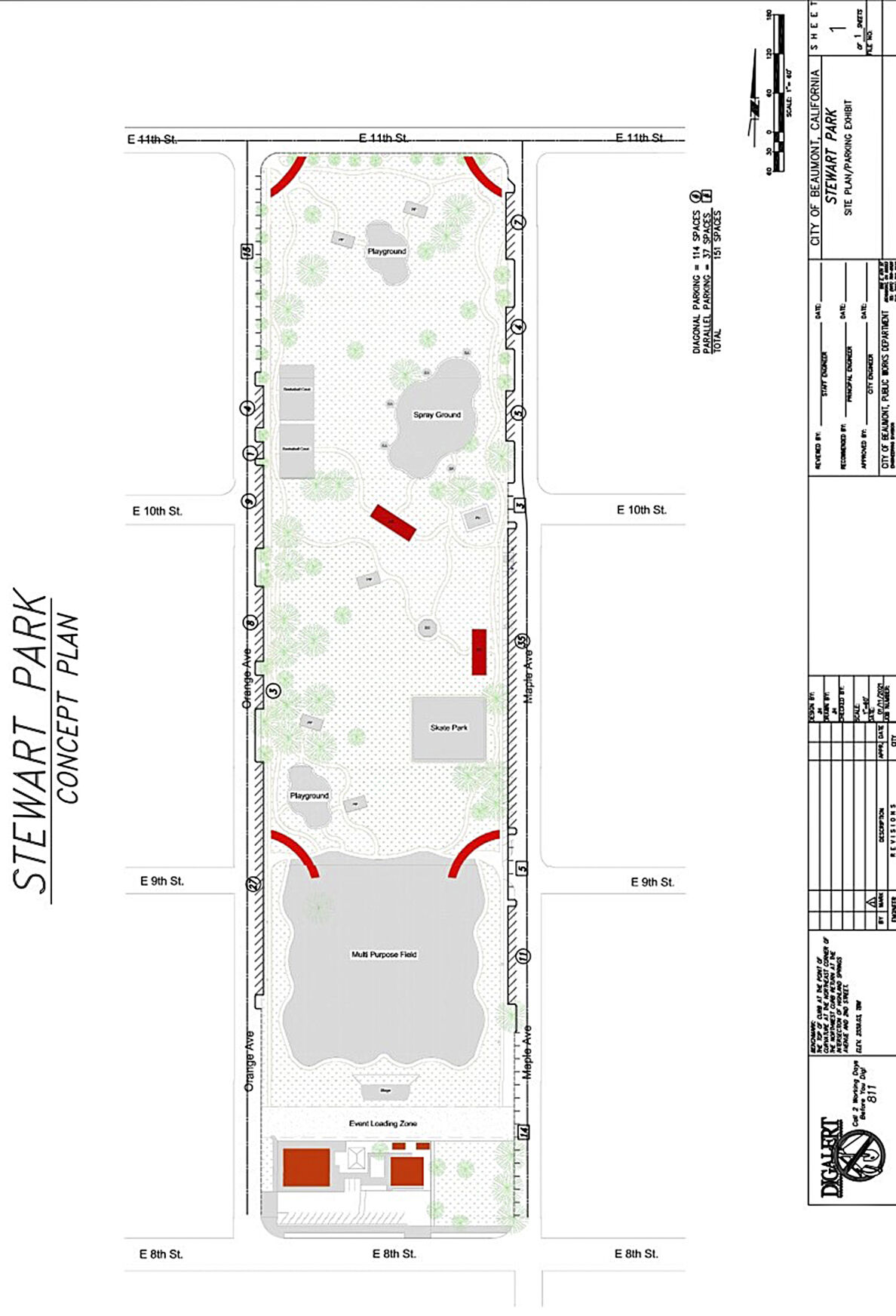 Photo via city of Beaumont

Tenth Street (as it intersects Stewart Park) will soon be closed off. Permanently.

Two of Stewart Park’s biggest amenities are destined for demolition.

The Beaumont Plunge will be removed and replaced with a splash park.

The pavilion, which has been graced by the likes of The Bangles, The Eagles, Air Supply, Eddie Money and Starship, will be torn down.

It will be substituted by a modern band shell and stage, replete with contemporary sound and lighting amenities, closer to 8th Street, flanked by a multipurpose field that can accommodate fans

Residents will notice the 11-acre park’s closure effective promptly, as the city gears up to give it a $3,395,000 overhaul that was approved by its city council at their Jan. 18 meeting, paid for by capital improvement funds.

Stewart Park spans three blocks, presently interrupted by two streets that are gated off. It has a playground, a ball field that lacks bases (but has dugouts for “Home” and “Visitors”), a basketball court and a skate park, and a third of the park doubles as a detention basin for storm runoff during wet years.

Here is a rundown of what can be expected over the next year-and-a-half as Beaumont kicks off its aggressive agenda to improve Stewart and make it a community destination, as outlined by the city.

The Beaumont Plunge, for better or worse, was probably the most costly factor.

The 3,981 square-foot community pool and adjacent 500 square-foot children’s pool opened in 1963. Prior to being drained, it was plagued by three leaks. The pool deck suffered cracks, some spanning longer than 10 feet.

The pool’s depth and slope of the deep end does not meet minimum requirements to justify a one-meter diving board.

The children’s pool does not meet the 2010 Americans with Disabilities Act standards, nor does it fulfill the Model Aquatic Health Code standards.

There is “significant corrosion” in the pool’s mechanical room.

The city is not happy with a diminished attendance over the years, despite an increase in the costs of keeping the pool open.

The shallow end is too deep for young children, making it unsuitable to teach beginning swim lessons.

It would cost the city an estimated $2,066,754 to renovate the pool as it is, and would require a full replacement of the children’s pool, and upgrades to the mechanical system, and remodeling of the bathhouse.

The city opted to instead spend $1,100,000 to build a “sprayground” closer to 10th Street, nearer to the planned playground, which would be comprised of a 17,000 square-foot splash pad.

The city anticipates a lower cost to run a splash pad, which would be ADA accessible and available year-round without a need to hire life guards, and practically eliminates the liability of drowning.

A gaga ball pit — similar to a dodge ball court, excepted that gaga ball courts are traditionally confined to an octagonally designed space, allowing participants to combine dodging, running, jumping and coordination skills, and does not require participants to be part of teams.

Pits can be placed in permanent locations, or they can be designed to be moved to other locations.

Playground equipment would be ADA accessible, and suitable “for children of all physical and cognitive abilities.”

A popular component of modern playgrounds is the inclusion of “multigenerational swings and challenge courses,” the city reports.

Instead of the V-shaped roof that looms rather low over the existing pavilion, the city is pushing for erection of a band shell: a stage with a more spacious curved roof, where bands can entertain visitors at future Cherry Festivals, with plenty of space for fans to spread out.

It will be built at the south end of Stewart Park, facing north.

When concertgoers are not using the green space, it will be available as a multipurpose field to allow for a variety of recreational activities such as baseball, soccer, rugby and field hockey.

The 6,500 square-foot skate park lacks some of its original components, which were removed or damaged due to vandalism and other factors over the 15 years it has existed.

The city plans on completely rebuilding it, to be located across from one of the playgrounds.

The ballfield is rated “fair to poor,” suffers from poor drainage and subject to being overrun by weeds.

The city believes that the ballfield lighting is outdated, and its electrical panel inadequate; further, there is no ADA-accessible route to the spectator area.

It will be removed.

A multiuse field at the south end of Stewart Park is expected to provide an outlet for recreational sports.

The city promises to put up new backboards, baskets, and refreshed court markings, and will add erosion control measures along the edges of the court.

This is the one edifice deemed to be in good standing.

With its solid brick exterior and relatively recently replaced roof, it will remain with no necessary changes.

Manual swing arm gates were installed to close off traffic through Stewart Park at 9th Street nearly 10 years ago.

The portion of 9th street, which technically still goes through the park, would be removed.

The city will soon close off the segment of 10th Street between Orange and Maple avenues, and remove replace it with park land.

Entryways to the four corners of the park will reflect a Spanish colonial revival theme, with red-tiled roofs and arched passageways, inspired by the likes of what can be found at the Mission Inn in Riverside.

The city is expected to approach the San Gorgonio Pass Historical Society for input on statuary that may be placed in the park.

Along the outer corridors will be 10-foot-wide sidewalks for food trucks during events.

The city sees the renaissance of Stewart Park as a vital piece of making its downtown specific area a city destination.

It is interesting that this work was approved, authorized and planned without any input from the people in the central part of Beaumont who use this park. While upgrades to the park are welcomed, closing of the plunge is not I believe in the best interest of the city. Some of the information listed in your article is not correct. First of all the Plunge was built with donations from the public. I was at the original grand opening which I believe was the summer of 1961, not 1963. Also the pool deck was replaced when I was on the city council about 19 years ago with volunteer labor. I and Councilman De Forge and the city building inspector broke up the concrete and did the labor to finish it. I took swimming lessons at the Plunge, my kids did and so did some of my grandkids. Not an issue. The issue with ADA requirement could have been addressed by simply placing a lift mechanism. The locker rooms are old and are in need of refurbishing etc, however that is a minimal cost. The corrosion is nothing more than usual maintenance required. In fact the city just spent quite a bit of money making improvements to the pool, prior to it being shut down by the pandemic.

When I was on the city council we discussed adding a splash area as a supplement to the existing pool. Not everyone can afford to live in a gated community or have their own backyard pool. This pool provided needed recreation for children living in the center of town and other areas. Taking it away is so wrong. The cost of the lifeguards was minimal and provided needed employment for high school and college age students along with job experience. None of this was thought out or discussed with the community. Why the big hurry to tear the pool out. In my opinion whoever wrote the report did a poor job.

One final point, where is all the money coming from? Is the city borrowing this money? I just don’t get it. The public deserves better answers and responses from their elected officials. Involving the community with input would provide a better park for all of us to use. The city council needs to be more understanding and take caution during this pandemic with spending the tax payer’s money. Better maintenance would have taken care of this problem, instead of kicking it down the road.