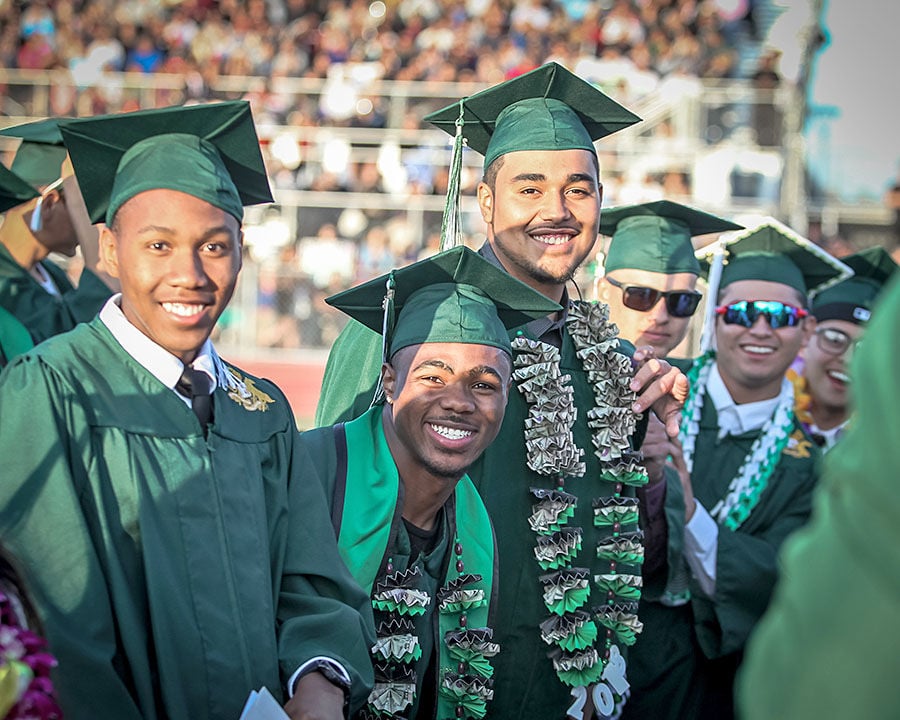 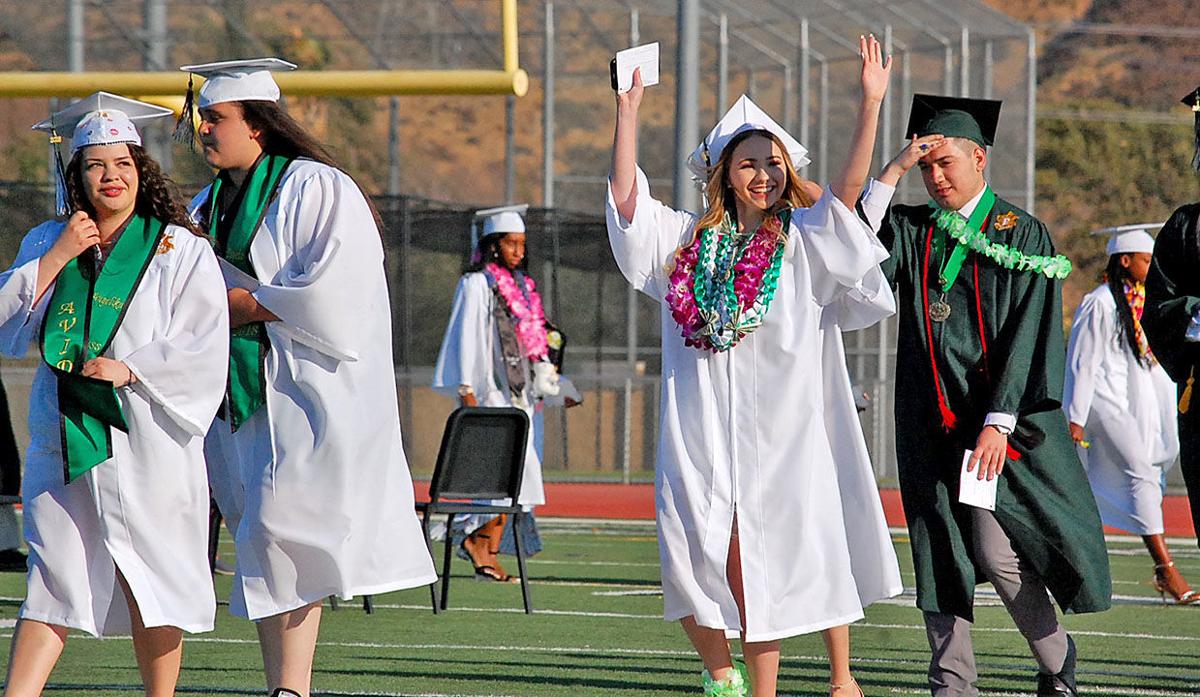 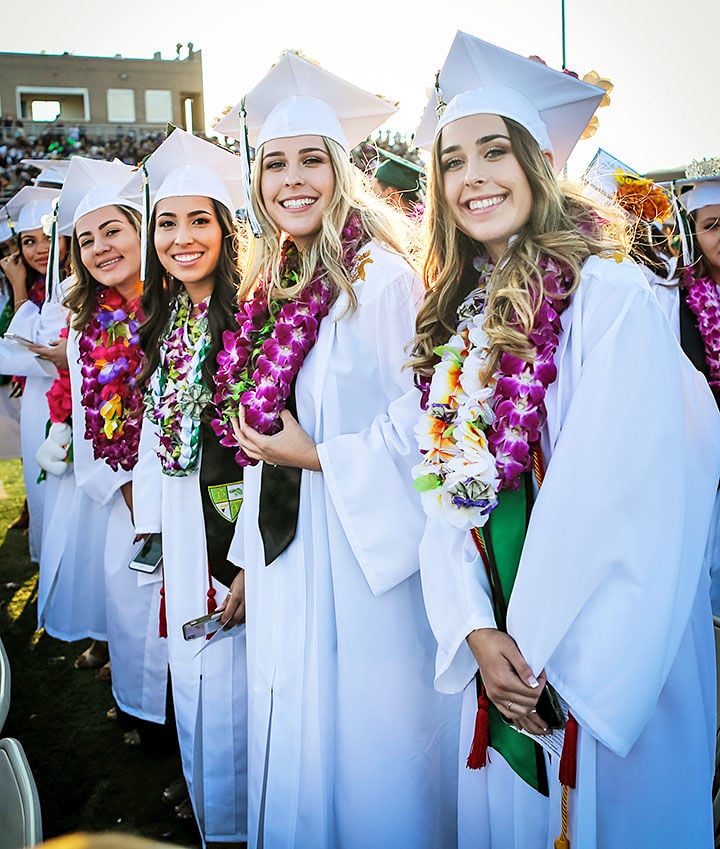 Banning High School graduates celebrate at the end of the commencement ceremony.

Banning High School graduates celebrate at the end of the commencement ceremony.

With fierce pride Banning High School’s Class of 2018 sends off the highest percentage of its students in recent memory to four-year colleges and universities.

A decade ago, the Class of 2009, when it had 200 students, had 26 percent of its seniors going off to four-year colleges.

The Class of 2018 in comparison, has 209 graduates. According to the high school’s guidance counselors, 31 percent of them will be attending four-year schools, and another 41 percent will start their college careers at junior college.

Eleven students will attend private universities; 15 will enroll at University of California campuses; 25 at Cal-State campuses; and 13 are attending schools out-of-state.

Mt. San Jacinto College has the highest number of Banning grads taking classes in the fall, with 35 departing seniors heading there, followed by 15 at Crafton Hills College and a dozen at College of the Desert.

Six percent will enlist in the military.

“This unique class stood tall and true to their core beliefs and values, presented creative and innovative viewpoints and stood behind them,” Principal Matt Valdivia said in his comments to seniors as they waited for their moment to go up and accept their diplomas during the ceremony in the school’s football stadium. “This class I call trailblazers, groundbreakers, trendsetters, outside-the-box thinkers, and above all, doers.”

Valdivia was thrilled to witness a successful “Guardians of the Galaxy”-themed grad night, and survived a senior prank in which Banning High School was allegedly put up for sale.

The Class of 2018 was the winner of this year’s spirit flag, and witnessed restoration of the Mountain Valley League titles in girls’ basketball and softball, and a Silver rating from the U.S. News & World Report’s rankings of Best High Schools in the nation. Football, baseball, volleyball and wrestling all witnessed CIF accolades.

They had the first LGBT prom queen; they restarted the Bronco Spirit Competition and brought back the Sadie Hawkins Dance, according to California State University, San Bernardino-bound Associated Student Body president Erlinda Diaz, who pointed out the highlights in a speech.

Salutatorian Melody McNair, who heads to UCLA to study psychology, urged classmates to “be grateful for one of many accomplishments you have been given the opportunity to experience, and never forget the people that you meet along the way,” singling out late class member James Wilson Jr., who died in 2015 after being struck by a train.

In her address to classmates, she was excited to remind them, “I just can’t help and be proud of all of us, because we did it: we experienced all these things together. It is through all of the classes we’ve taken, the teachers we’ve met, the ebbs and flows, the good times and bad — we finally made it. Banning High has made us into the people we are today” and “shaped us into the people we will become.”

Senior Class President Lynsea Southwick, who will attend UCLA, also addressed her peers, passing along some advice from social studies teacher Michael O’Neill: “Struggle and you will earn.”

“We have struggled for 13 years — give or take — and from that we have earned being here today,” said Southwick, who holds the distinction of being Student of the Year. “We have earned being able to say ‘We did it,’ that ‘We graduated high school,’ that we made our mothers and fathers, guardians, aunts and uncles proud.”

The Class of 2018 had some busy students, though not all of them get to relax entirely for the summer.

Mykal Thuney, captain of the swim team, will be working at the community pool in Banning as he waits for school to start at the University of Redlands in the fall, where he plans to major in biochemistry.

He wore a red cord connoting the fact that he was graduating with college credit.

A number of people gathered to surprise him at his graduation party at his Banning home, including teacher Dan Varney and school board member Anne Price.

Among them was fellow graduate Jason Claros Cristales.

He too will be working over the summer as he waits to enlist in the Navy.

“The personalities at Banning are different than other generations,” he said. “We’re a less naïve generation than previous classes; we’ve learned from those who came before us.”

He too was on the swim team.

He credited English teacher Brittney Goodwin for “always being kind and fair, and for pushing me to do more than I thought I could.”

“I’ll miss the teachers and the staff,” she said. “They really helped me through my high school experience, especially the front office staff.”

Carter Endsley is one of six graduates enlisting in the Air Force next fall.

“Everyone down here was close. It’s a small town — you stick with the same people” since kindergarten. “I’m going to miss those friendships,” he said, singling out fellow graduate Justyn Subrai, who is one of two classmates going into the Army.

Ashley Gates wore a blue Hawaiian lei, given to her by her grandmother, and a green and white cord signifying her participation in the Academy of Business & Technology. She played alto sax in the marching band all four years, and will head to Riverside Community College with eight other graduates, with plans to one day become an attorney.

“I’ll miss all my friends. We literally grew up together,” Gates said. “We started at Central (Elementary School), went to Coombs (Intermediate School), then to Nicolet Middle School and Banning High School. We all became family.”

She singled out graduates Rosa Perez, an accomplished individual who earned a Seal of Biliteracy, and senior Raeanne Mills who participated in the dual enrollment program at Mt. San Jacinto, as well as a couple of underclassmen, Leah Price and Diana Hutchinson, as being good friends who she will miss.

Senior Sierra Hamilton will prepare for a career as a personal trainer at Riverside Community College.

“I’ll miss being in varsity cheer, and all of my friends. I’m so excited and scared to move on,” Hamilton said.

She gave shout outs to friends Ilayna January, an underclassman, and fellow graduate Ericella Cardona, as friends she will particularly miss.

Staff Writer David James Heiss may be reached at dheiss@recordgazette.net.

Hello and good evening everyone, my name is Colleen Lagazo.

Spring Charter Schools’ Cherry Valley Homeschool Cooperative & Learning Center’s students are accustomed to waiting in classroom specified parking stalls for their parents after school; however after waiting in the blistering heat at the beginning of the school year, a few students broac…

All new faces for Banning school board