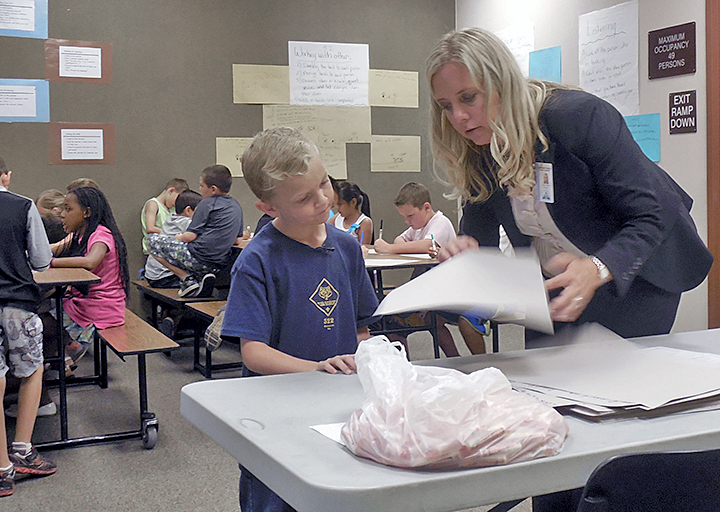 Tournament Hills Elementary School principal Callie Beitler goes over drawings by Cameron's classmates during a club meeting on Friday, May 30. 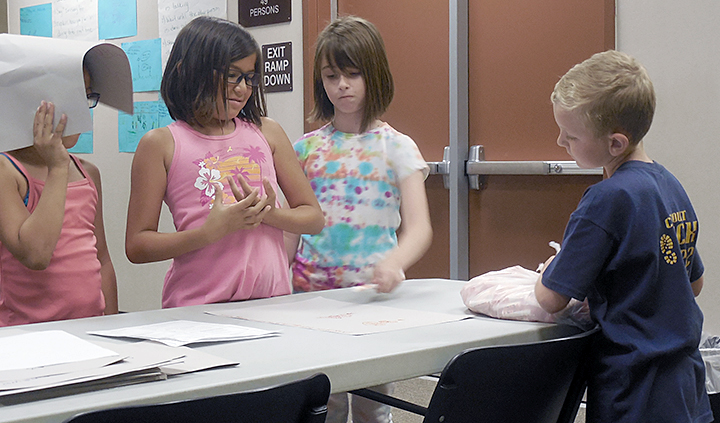 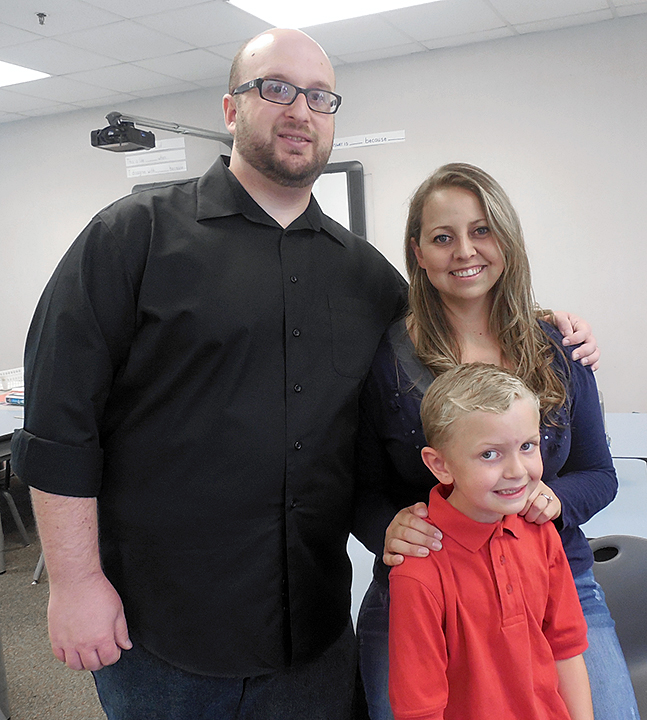 Philip and Jessica Southard with their 7-year-old son Cameron Thompson.

Tournament Hills Elementary School principal Callie Beitler goes over drawings by Cameron's classmates during a club meeting on Friday, May 30.

Philip and Jessica Southard with their 7-year-old son Cameron Thompson.

Cameron Thompson knew he had done something wrong when he teased a Tournament Hills Elementary classmate about bringing a Barbie doll to school.

The classmate he teased was a second-grade boy, who not only was teased by Cameron but by Cameron’s friends as well.

The after-school incident was still on the 7-year-old’s mind when he got home so he told his mom, Jessica Southard. She and her husband, Philip, talked with Cameron about what he did and decided that he needed to write a letter of apology to the boy.

But then, Cameron, who is also a second-grader, took his remorsefulness one step further and told his mom that he wanted to start an anti-bullying club at school.

Last month, 76 Tournament Hills Elementary School students attended the first meeting. There have been four meetings during lunchtime on Fridays.

The club, based on the Positive Behavior Interventions and Supports (PBIS) national program, will resume in September.

“It’s going to reinforce the PBIS skills  – the 16 social skills. If they follow these 16 skills, chances are they’ll be successful in life,” said Tournament Hills Elementary School principal Callie Beitler.

Southard, who also has a 6-year-old son, Gavin, said she is proud of the steps Cameron has taken to turn a negative situation into a positive one.

“My one job in life is to raise productive little men,” she said.

One thing the Southards and Cameron didn’t expect is for the story to be heard nationally and internationally.

Last Friday, during the club’s final meeting, a crew from the “Today’’ show spent three hours filming a segment that aired June 3, on the national morning news program. The segment can be viewed at Todayshow.com.

What was unusual about the bullying incident was that it only happened one time in March when the 7-year-old boy brought the doll to class for “Show and Tell.”

“I said, “Why did you bring a Barbie because that’s not for boys,” said Cameron. “I didn’t know yet that there’s boy things and girl things.”

After telling his mom what he had done he wrote a letter of apology to the boy.

“I told him that ‘you need to put in the letter that you are sorry for what you did, it won’t happen again and to say something nice about him,’” Southard said.

Cameron said he gave the boy the letter the next day at school. Southard also wanted to speak to the boy’s mom, Allison, who asked that only her and her husband, Allan, only be identified by their first names for this story.

Southard said she told Allison, “I’m just so sorry. This is not how I raised him.”

Cameron said he still felt shame and regret for his actions and that’s when he decided to start the anti-bullying club after talking with Beitler and his parents.

Allison and Allan were at the school last Friday for the club meeting and the “Today’’ show taping.

The couple agreed that they wanted to focus less on the incident itself and look at the positives that have come out of this incident.

They said that their son had told them he had been teased at school for bringing the Barbie to class.

Allison said she was surprised but happy that Southard took the time to apologize to her for her son’s behavior.

Allan said what also pleased them was that the changes were “student-generated.”

On Friday, May 30, during the club meeting, Beitler told the children about two skills: “Resisting Peer Pressure’’ and “Asking for Help.’’

Under “Resisting Peer Pressure,” she said the children should: look at the person, stay calm, say clearly that they don’t want to participate, suggest something else be done, and if needed, leave the situation.

“Under “Ask for Help,” they should: look at the person, ask if they have time to help, explain what kind of help is needed, and thank them for helping.

Beitler asked the students to draw a picture of one of the skills, then turn it in to Cameron and his mom.

While this was taking place, “Today’’ show cameraman Jim Farrell and audio tech Jeff Balch filmed the students and taped interviews with Southard, her husband, and Cameron, along with Allison and Alan – the boy’s parents – and principal Beitler. Producer Max Paul was the interviewer for the segment.

One of the segments was taped in Cameron’s classroom. His second-grade teacher, Pamela Pearson, said she is “proud” of her student.

She said she wasn’t aware of the bullying incident because it happened after school, but she is happy that Cameron made some good choices to correct his behavior.

Cameron and his family also made a three-minute video called “Confessions of a Bully’’ that can be viewed on YouTube. It has received positive responses so far.

The video re-creates the incident, with Cameron’s brother, Gavin, playing the classmate. Cameron struggles to make good choices because he has attention deficit hyperactivity disorder (ADHD) and oppositional defiance disorder, which is stated in the video.

Beitler said she showed the video to students at Tournament Hills Elementary School.

Cameron said that he and his classmate are now friends, eat lunch together and play at recess. He said he has learned that “it’s not too late to change who you are and to accept others for their differences.”

“I feel like I want to have this club until I’m a fifth-grader,” said Cameron.

Schools in Beaumont were in session for just a few days when the first student cases of COVID-19 were reported.

After the Record Gazette went to print last week, the guidelines for school districts returning to in-person instruction in California continued to evolve, and Beaumont Unified School District has been trying to clarify actions taken at its last board meeting, where dozens of visitors advoca…

Many would assume that most sophomores should already know their way around the Beaumont High School campus.

Parents, grandparents and those long out of school came to advocate for the Beaumont school district to not impose a mask mandate on children during its July 27 school board meeting.

Between Beaumont and Banning’s schools, 1,500 years’-worth of service heads into retirement