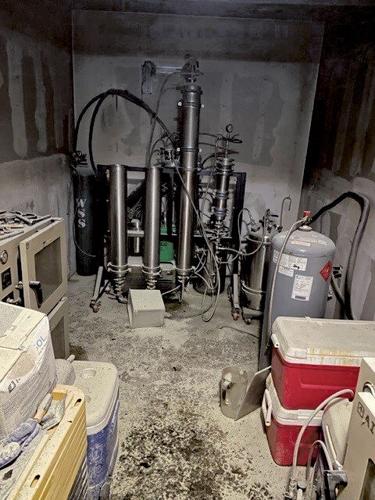 A suspected marijuana oil lab that was involved in a shed fire at a Banning residence on Wednesday, April 27. 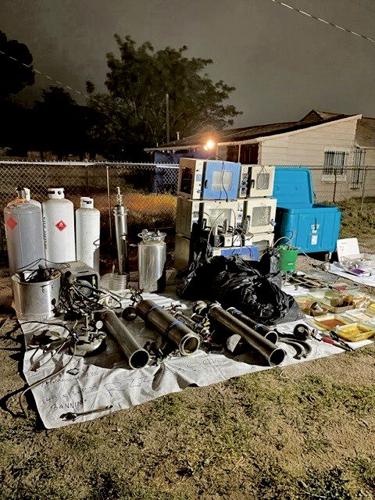 Equipment recovered from a suspected marijuana oil lab that was involved in a shed fire at a Banning residence on Wednesday, April 27.

A suspected marijuana oil lab that was involved in a shed fire at a Banning residence on Wednesday, April 27.

Equipment recovered from a suspected marijuana oil lab that was involved in a shed fire at a Banning residence on Wednesday, April 27.

On Wednesday, April 27, after responding to a 911 call for a shed fire Banning police officers discovered and dismantled a marijuana wax lab in a Banning backyard.

According to a Banning Police Department press release, at approximately 9:19 p.m. on April 27, Banning police officers responded to a 911 call regarding a shed on fire in the backyard of 145 N. Third St. Officers arrived and located the resident, Anthony Dancy, 45, attempting to extinguish the fire.

Officers discovered that the shed contained an active “honey oil” lab. Surrounding residences were evacuated for safety reasons until the scene was made safe.

The honey oil lab was safely dismantled and pursuant to a search warrant, several ounces of finished honey oil or marijuana wax were recovered from the location.

According to the Fire & Burn Foundation, honey oil is a residue created by soaking parts of the marijuana plant in solvent or blasting it with butane gas. The result is a substance consumed by smoking, eating or vaporizing. It produces a potent high, but the process of making it is extraordinarily dangerous as the solvents and gases used to produce the oil are extremely flammable and often saturate clothing.

Dancy was later arrested, after receiving medical treatment for minor injuries. He was booked for violation of 11379.6(a) H&S—Manufacturing a Controlled Substance and 273a(a) PC—Child Endangerment. He was later released on a $50,000 bail. Additional charges will be filled with the Riverside County District Attorney’s Office related to the lab and arson. Banning Police Case # 22-897.

Beaumont is ready for concerts, though not ready for the costs

When it comes to the storied Beaumont Sports Park, there have been many triumphs, and lots of losses.

A symposium offers more sagacity for the water-wise

The Boys & Girls Clubs of the San Gorgonio Pass (BGCSGP) has been awarded a few grants in recent weeks, from the Inland Empire Community Foundation, Bank of America and the Panda Cares Foundation.

A second portable restroom and laundry trailer has been ordered for Banning’s Opportunity Village, which provides temporary transitional housing for the previously homeless.

On Tuesday, Aug. 30, a student was arrested for setting off fireworks at Banning High School.