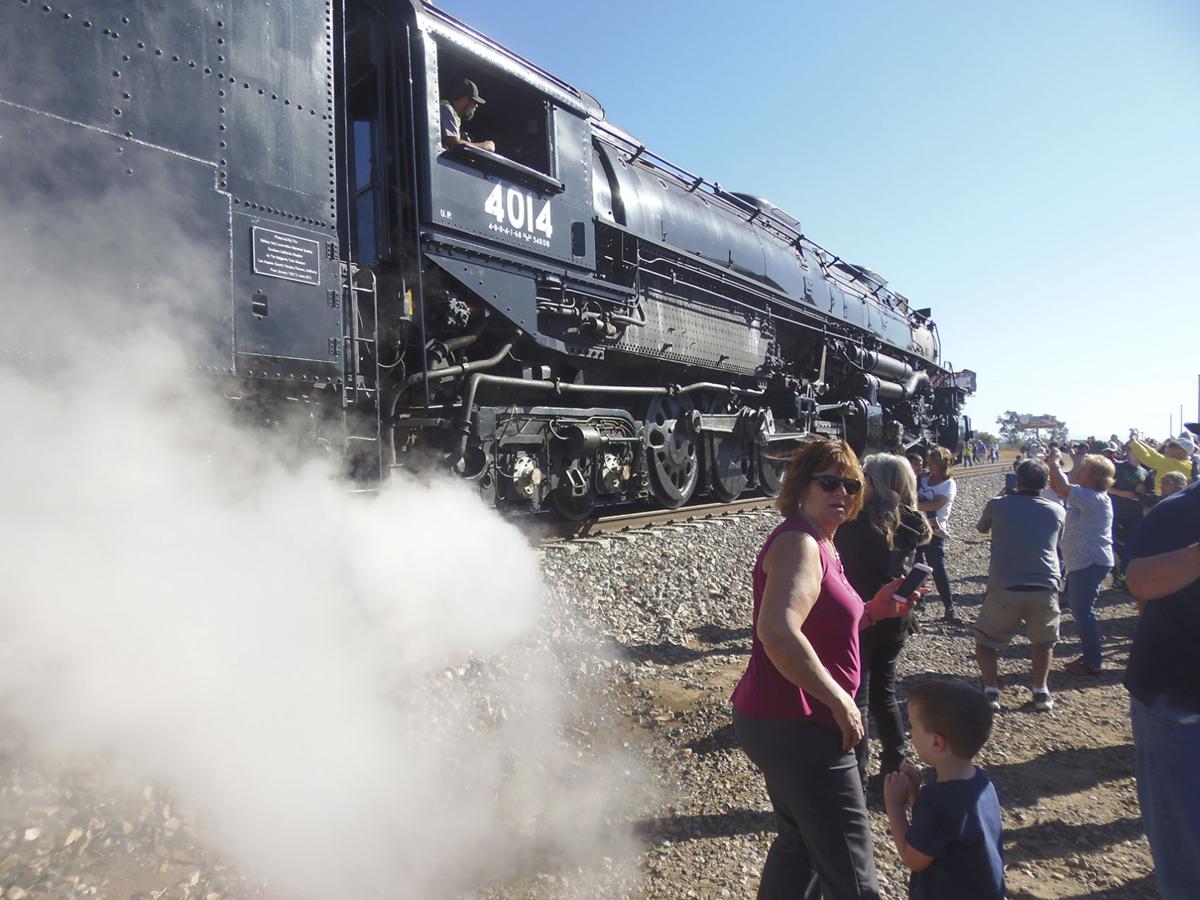 The Big Boy steam engine releases residual steam as it comes to rest at the Highland Springs Avenue over crossing. 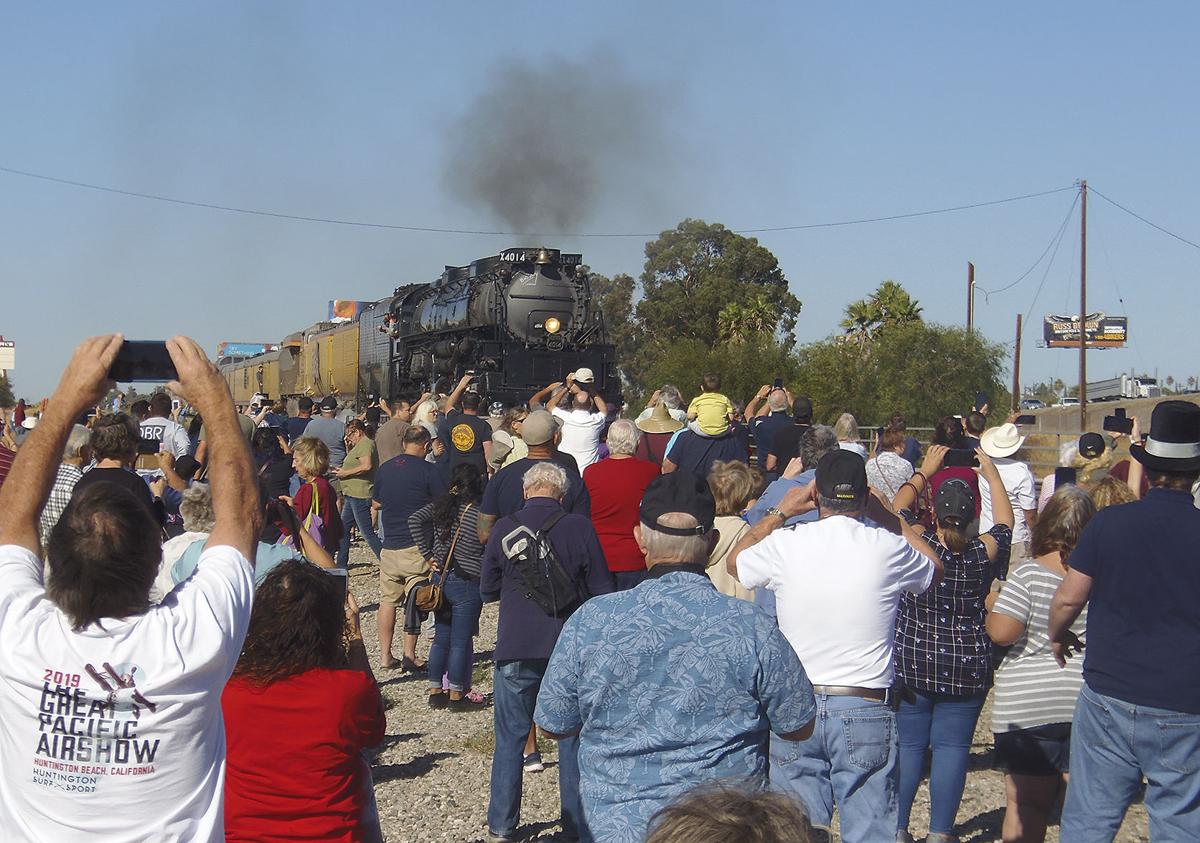 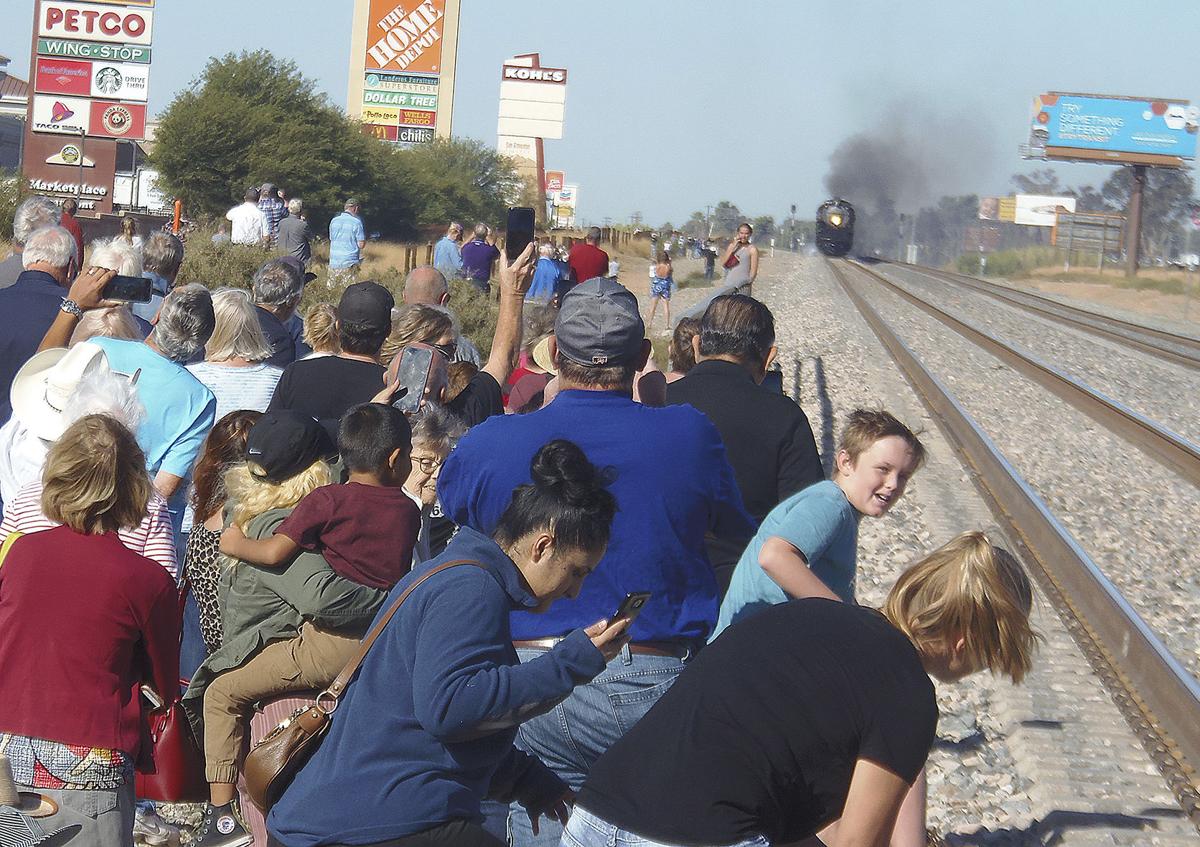 Hundreds of folks from around the Pass area, and even beyond, gathered together at the Highland Springs Avenue overcrossing to see the spectacle of the Union Pacific Railway’s 4014 Big Boy steam-powered locomotive on Tuesday.

People from all of Southern California came to the Pass area to catch a glimpse of the steaming beast as it rolled into town and stopped on the tracks above Highland Springs Avenue.

One train enthusiast, 93 year-old Caesar Marestaing from Tustin, came with his son and great-grandson to marvel at the magnificent machine.

Before migrating to the United States in 1957, Marestaing grew up in Argentina where he would take a steam-powered train every day to college and then work.

Riding those trains for so many years fostered his love for steam engines and seeing this brought back fond memories.

“I love trains all my life,” says Marestaing with a slight Argentinean accent. “Seeing this steam engine bring me so many special memories.”

He recalled how the steam trains would collect water in his hometown before making the trip into the city.

Another young man, three-year-old Lucas from Beaumont was on hand with his mother to witness the historic arrival of the Big Boy to town.

“He has two train conductor keys that they gave him,” says Gina Duran as she explains how the engineers gave Lucas the keys while their trains were parked. “He loves trains.”

Lucas, donning a train engineer cap with a Thomas the Train patch on it, says he wants to drive trains when he grows up.

Unlike airports, trains have always maintained strict timetables and this time was no exception.

The train was set to arrive at 9:30 a.m. on Tuesday and spend only 15 minutes parked on the tracks before it moved on down the line.

Smoke from the engine could be seen moments before the train made its first appearance as it came into sight just beyond Pennsylvania Avenue in Beaumont.

A couple of blasts from its deep-resounding horn could be heard loud and clear from over a mile away as it announced its arrival.

At 9:29 a.m., the crowd roared with excitement as the Union Pacific Big Boy pulled in and stopped at the makeshift train station in front of the Sun Lakes Shopping Center in Banning.

The Bulking black behemoth blew down some residual steam from pipes along the sides underneath the engineer’s cab.

At 132 feet long, nearly as long as two semi-diesel trucks and trailers, the engine weighs over 1.2 million pounds and produces more than 6,000 horsepower.

It is able to pull more than 7.2 million pounds up the steepest of mountain grades.

As the Big Boy rested for 15 minutes, throngs of people surrounded the engine to get an up close and personal look.

Nearly everyone was taking selfies with the beautiful machine.

Several people were flying drones to take aerial video and pictures of the top of the train.

One man even went so far as to put a GoPro camera on the ground in between the tracks to capture video of the underbelly of the beast.

A man from the train crew walked around the engine with a bull horn shortly before their departure announcing the sound of five blows from the horn would signal their leaving.

It was an important warning for the bystanders so that when they heard the whistle blow they were to clear the tracks.

It was also necessary to prepare the unaccustomed train watchers to cover their ears since the horn was deafening.

After the bursts from the horn, and as people began making their way off of the tracks, 4014 began slowly rolling out of town, making its way to its next stop in Indio.

It was 9:46 a.m. as Big Boy departed, giving a full minute of extra viewing time for all of the train enthusiasts.

After Big Boy left, the freeway came into view where there were cars lined up alongside the onramp to view the train and a noticeable slowdown on the freeway as drivers slowed down to catch a glimpse.

At the end of all the excitement of the event, there was one medical emergency when an elderly began feeling chest pains.

It took the Fire Department and ambulance extra time to respond to the victim due to the mass exodus of train watchers.

The lady was treated and transported to a hospital.

Built in 1941 for the Union Pacific Railway to climb the steep mountain grades of the western edge of the Rocky Mountains, the 4014 Big Boy is the largest working steam- powered locomotive in the world.

It spent only 18 years in operation before it was retired and donated to the Railway and Locomotive Historical Society and spent nearly six decades on display at the Pomona Fairplex.

The Union Pacific Railway bought back the engine in 2013 to begin restoring the steam-powered beast back to its original glory.

The project was completed earlier this year and it began touring the mid-west over the summer.

It is currently running its southwestern leg of the tour, which brought it to the Pass area.

From here, the Big Boy headed out to Arizona, New Mexico, Texas and eventually back home to Cheyenne, WY.

On Oct. 15 from 9 a.m. to 1 p.m. the 25th annual Valley-Wide Employment Expo and Virtual Job Fair is an opportunity for job seekers and businesses to network and recruit potential candidates.

County seeks veterans who were denied opportunities to receive diplomas

They were away from home serving their country while classmates were marching in commencement ceremonies.

The sanctuary and other buildings on the campus of First Evangelical Lutheran Church in Redlands have been virtually deserted since the beginning of the COVID-19 lockdown nearly six months ago.

Banning convinces congressman and Morongo to work towards closing airport

Congressman Raul Ruiz has been solicited to assist economically depressed Banning with attempting to close down its airport — a move that would require Congressional support.