The Joshua Palmer Way sign on the east side of Highland Springs Avenue next to the westbound offramp contains the phrase,

“In the name of freedom.” 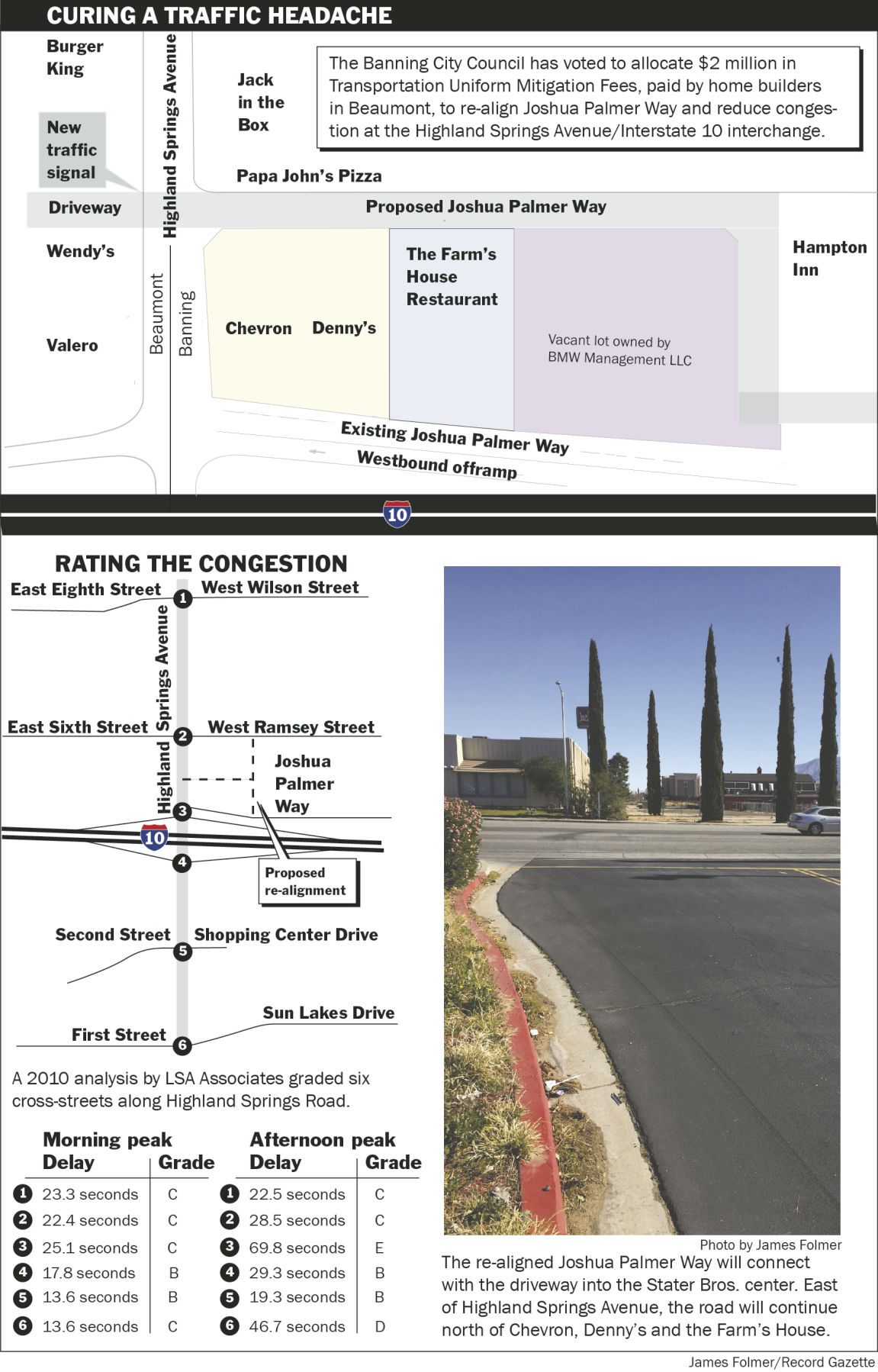 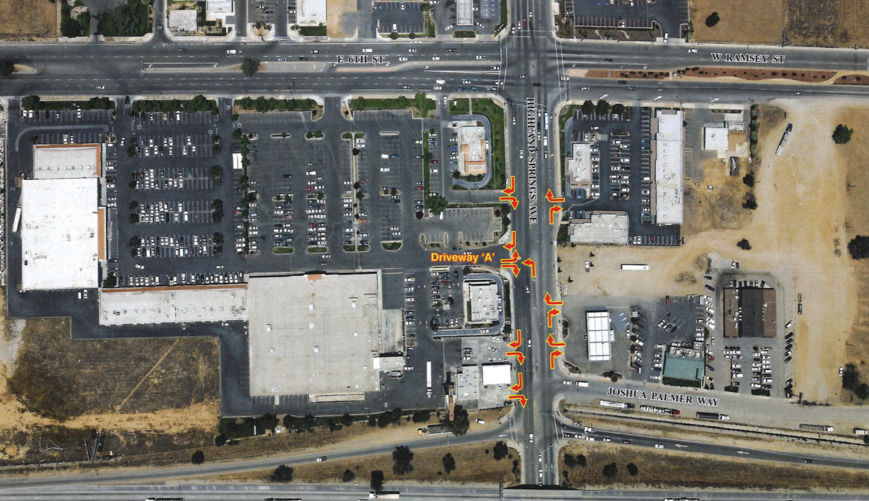 However, the half-mile stub of a street named in his honor after Palmer was killed in Iraq in 2004 makes congestion worse at the Highland Springs Avenue/Interstate 10 interchange.

While traffic comes and goes in seven directions, everything comes to a halt when a few cars get their turn to turn left onto Highland Springs Avenue.

Because Joshua Palmer Way is just a few feet north of the westbound exit from I-10, there’s no right-turn-on-red.

During peak hours, the 215-foot offramp backs up to the freeway.

Motorists must wait for the light to change three times before proceeding south onto Highland Springs Avenue, gateway to Sun Lakes Country Club and the largest cluster of stores in the area.

Since 2007, the city has had a plan to move Joshua Palmer Way north and take it out of the Highland Springs Avenue/I-10 equation.

At its Dec. 12 meeting, the Banning City Council approved a $2 million reimbursement agreement from the Transportation Uniform Mitigation Fee (TUMF) to pay for the realignment.

The Western Riverside Council of Governments (WRCOG), which administers TUMF, will allocate $1.8 million for construction.

The remaining $200,000 will pay for the right-of-way between the restaurants along the existing street and the Jack in the Box center to the north.

A new traffic signal will be installed at the driveway into the Stater Bros. center to the west in Beaumont.

Right-turn only lanes to control the traffic flow and “pork chops” — triangular islands of concrete that serve as refuge for pedestrians — were proposed in a 2010 traffic analysis prepared by LSA Associates Inc.

Public Works Director Art Vela reminded the council that WRCOG sued Beaumont for failing to contribute TUMF funds from its explosive housing growth in the past decade.

“WRCOG has reached a settlement with Beaumont and as part of that agreement the city of Beaumont was to pay WRCOG the amount of $4.1 million,” Vela said.

“Of that amount, $2 million will be allocated to the Highland Springs/Interstate 10 interchange project,” he said.

The realignment of Joshua Palmer Way is the first phase of improvements to this maze of lanes and lights.

Vela hopes to finish the project by March.

It is part of the preparation for Banning’s own housing boom when construction of Pardee’s 4,862-home Butterfield Ranch begins next year just down the street.

The 1,543-acre community will be built at the northeast corner of Highland Springs Avenue and Wilson Street.

The allocation does not affect the TUMF revenue anticipated from the Butterfield Ranch project, Vela said.

When the council unanimously approved the allocation, Councilman Art Welch waved a fist and whispered, “Yessss.”

The LSA Associates’ analysis says Joshua Palmer Way extends a half-mile east to Apex Avenue, along the eastern side of the Hampton Inn, which opened in 2008.

The study explains that the traffic signals, owned by the California Department of Transportation’s District 8, operates in five phases:

• The north- and southbound “through passes” operate concurrently. The remaining phases operate independently.

• The phasing along Highland Springs Avenue is set up to allow northbound vehicles continue to get the right-of-way (green) long after the southbound movement is signaled to stop (red).

“This creates confusion for drivers trying to make a southbound left turn from Highland Springs Avenue to Joshua Palmer Way, especially when the green signal in the southbound direction turns yellow and southbound drivers are expecting the opposing traffic to stop,” says the LSA report.

Analysts follow methodology of the Highway Capacity Manual, which assigns a level of service rating to intersections.

The afternoon peak hours (4 to 6 p.m.) scored a B, three C’s, and a D and an E — the last for drivers trying to turn left from the westbound I-10 offramp to turn left onto Highland Springs Avenue, which took an average of nearly 70 seconds.

Personal experience suggests things have gotten worse during the past eight years.

When the seventh traffic signal is added at the new Joshua Palmer Way at the driveway into the Stater Bros. center, LSA predicts the level of service will improve to two A’s, two B’s and three C’s.

Heading west on Sun Lakes Boulevard, which turns into First Street when it crosses into Beaumont, leads to the Route 79/I-10 interchange.

It may be seen as a way to avoid the Highland Springs traffic, but that intersection also is critically congested and confusing.

An analysis by Minagar & Associates Inc. of Irvine conducted in August rated eight intersections on the Beaumont side.

The mid-day peak hours (11 a.m. to 1 p.m.) is the worst. The intersection of Highland Springs Avenue and East Second Street took an average of 52.1 seconds, a D grade.

Getting though the I-10 westbound onramps at Highland Springs Avenue during the afternoon peak hour, 4 to 6 p.m., took 37.2 seconds — another D.

And the intersection of East Second Street at Paseo Beaumont — the turn between Bank of America and Taco Bell/Starbucks — scored a D during all three peak hours measured in the study.

The three intersections “experience unstable peak-hour traffic conditions which are approaching the threshold of unacceptable level of service,” an E grade, the analysis says.

The study proposes limits on westbound left turns to improve traffic flow and a roundabout at East Second Street and Commerce Way.

Residents of Sun Lakes Country Club have long wished for a way to avoid the Highland Springs/I-10 interchange.

From an aerial viewpoint, the answer is obvious: Connect Westward Avenue with Sun Lakes Boulevard.

Sun Lakes Boulevard ends at Highland Home Road about 1.6 miles to the west.

The environmental impact report on the 3,385-home Rancho San Gorgonio project lists the connection as a “planned improvement” with four lanes.

Westward Avenue will be the northern border of the 830-acre project.

An analysis prepared last year by Kunzman Associates Inc. of Orange last year calls for a traffic signal at Sun Lakes Boulevard and Highland Home Road, eventually expanding the two-lane road to a six-lane thoroughfare with a new I-10 interchange.

However, Vela told the Banning Chamber of Commerce in September that $10 million of funding for the $17.6 million project would come through TUMF during the second phase of the six-phase housing development.

The road would require a bridge across Smith Creek.

“This project will alleviate some of the traffic at Highland Springs Avenue,” Vela said. “It’s a pretty important project, so we’re not going to lose focus on this, that’s for sure.”

According to Record Gazette archives, 1st Lt. Joshua Palmer was 17 when he decided to join the Marines.

He needed his mother’s consent, which she reluctantly granted.

He earned a bachelor’s degree in international relations from the University of San Diego in three years.

Palmer was a platoon commander in the 1st Battalion, 5th Marine Regiment, 1st Marine Division, out of Camp Pendleton.

He was killed in combat from hostile fire on April 8, 2004, in Al Anbar Province, Iraq, outside of Fallujah.

The Joshua Palmer Way street sign says, “In the name of freedom.”

Until Jan. 1, Staff Writer James Folmer may be reached at jfolmer@recordgazette.net .

Staff Writer James Folmer may be reached at jfolmer@recordgazette.net.