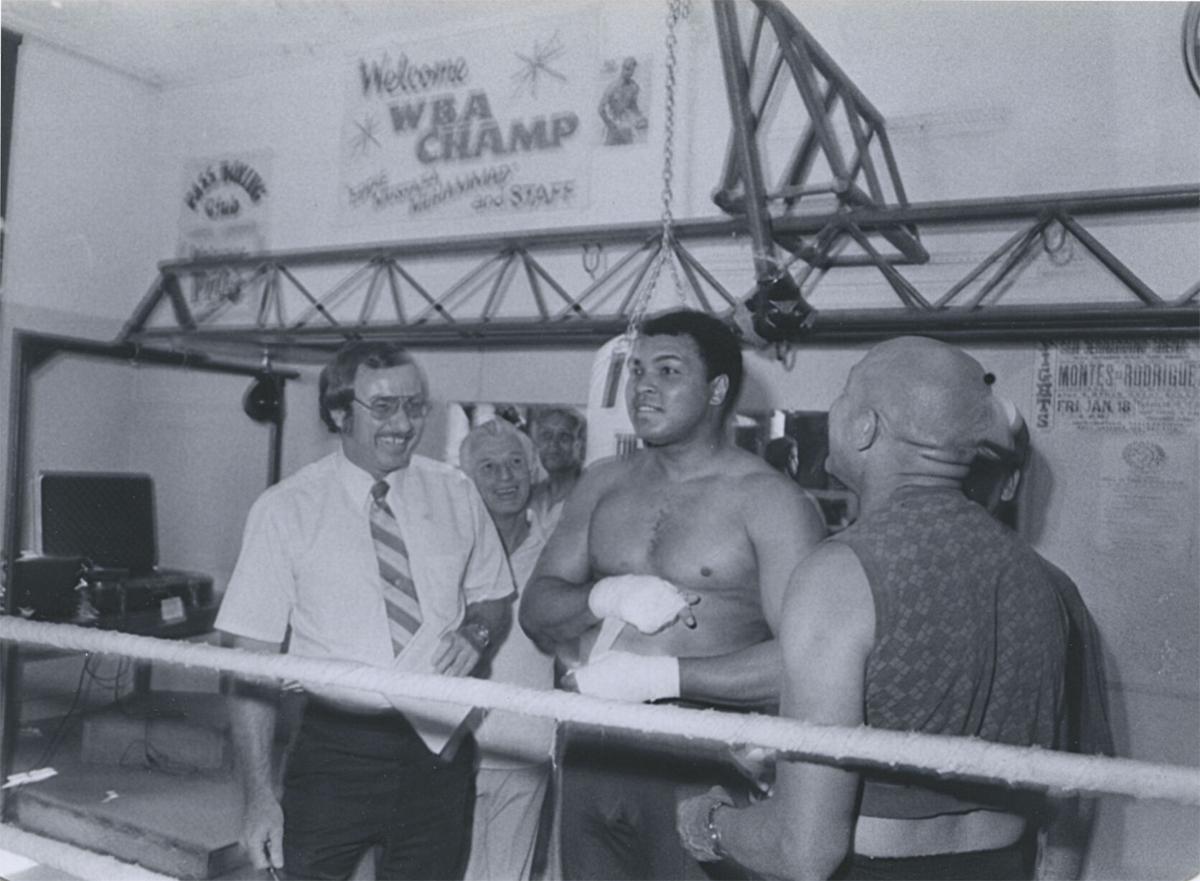 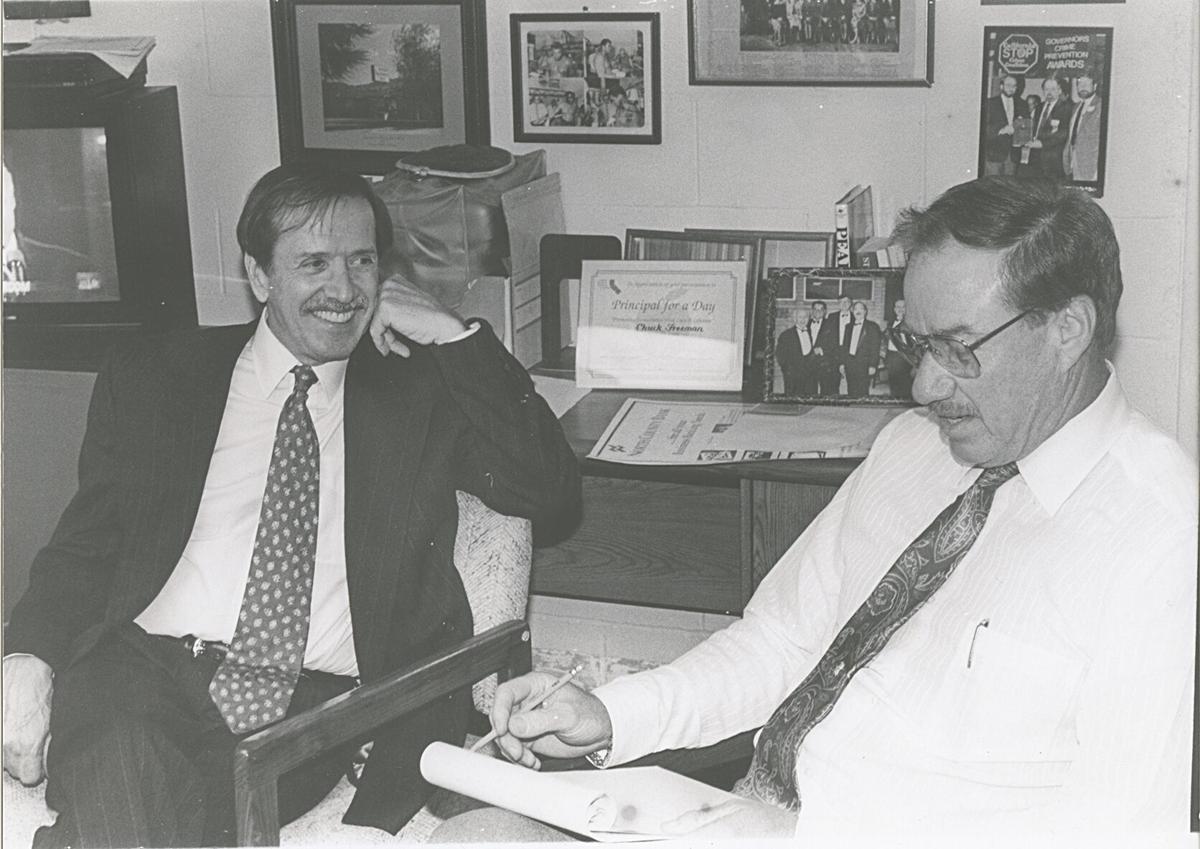 In this undated picture then-Congressman Sonny Bono, left, is interviewed by Charles Freeman.

A maternal possum with joeys hanging from her “terrorized” the backyard of Gail DeForge.

It was captured in a trap, and DeForge called her father, Charles “Chuck” Freeman, who lived around the corner from their Beaumont home, for assistance.

Freeman brought his camera with him, and took a picture of his granddaughters Kelsey and Kristin, clad in NASCAR T-shirts and pajamas, surveying the opossum scene, and plastered the picture on the front page of the Record Gazette, where he worked for 25 years, retiring as publisher in 1996.

“I’m still not sure that photo would have been front page material if we didn’t have our ‘Bampa’ working at the paper,” his granddaughter Kelsey DeForge Gormley says, but it was one of her earliest memories of him working for the Record Gazette.

Freeman passed away March 31 at his home, ending a lifelong battle with diabetes.

His imprint was all over the Pass area, and he had a hand in connecting so many people and programs.

According to his daughter Gail DeForge, Freeman previously worked at the Sun Telegram, the Rialto Record, and the Wall St. Journal prior to working at the Record Gazette in 1971.

“I don’t remember at what point he became co-publisher, and I don’t remember everything he did” at the paper, DeForge says, but “he lived and breathed the newspaper. He went on calls as a reporter just for the excitement. He loved being in the know,” she recalls.

Retired Banning City Treasurer John McQuown was referred to Freeman when McQuown moved to Banning, since Freeman was known as the “go-to guy.”

“I called and had lunch with him and could tell right away that he had his pulse on the happenings in Banning,” McQuown recalls. “He introduced me to Mayor Carl Wolfram and, along with Richard Sanchez, we had lunch at the old Gramma’s (now the Casa Cruz building). Upon their recommendation, Carl appointed me to the Banning Park and Recreation board.”

In turn, McQuown introduced Freeman to the San Gorgonio Pass Rotary Club in the early 1980s, and Freeman would go on to become quite involved, assuming the role as president and presiding over a club that had 75 members.

McQuown fondly remembers invitations to the Freeman residence every Christmas eve, when he and wife Sue and their three children would look forward to Judy Freeman’s homemade Mexican food and cookies.

“We always had great discussions with Brian DeForge,” the former Beaumont mayor, “and Gail, while the kids helped Aunt Judy with meals,” McQuown says. “Eventually politics crept into the conversation, and that would carry on until Chuck said it was time to feed the fish. We would all go outside to his pond. He would ring the bell next to the pond, and here would come the fish. That was a highlight of Christmas eve.”

Due to his connections, McQuown got to cover sports at Banning High School.

“Those were exciting times, watching the men’s basketball team and their 97 straight league wins,” McQuown says. “I was there that night they lost to Twentynine Palms. The gym was always sold out — thank goodness for the press pass.”

Through his connection to Freeman, McQuown got to meet Tommy Lasorda and Vin Scully while covering a Dodgers game.

Freeman could be a hands-on kind of guy: McQuown, a retired veterinarian, sometimes would need extra help, and Freeman was occasionally at McQuown’s office scrubbing and providing a helping hand during surgeries.

“The McQuowns are going to miss Uncle Chuckers,” he says. “We both have watched our families grow and have been able to reminisce over these past 40 years. It was great that just three weeks ago that some of the old rat pack members, along with our old golf group, got together over lunch at Russo’s and cajoled and kidded each other about all that has been going on. What a day. What a man!”

Former Weaver Mortuary owner and employee Lew Weaver met Freeman when he initially began working at the Record Gazette, which at the time was a daily newspaper.

“Before there was e-mail and faxes, we typed up obituaries and brought them down to the paper,” part of Weaver’s role as funeral director. “I used to deliver the paper five days a week. He was one of the key folks promoting and developing” the Record Gazette.

With the advent of digital technology, “Eventually we didn’t visit the office as often, but at least twice a month I would come and hand-deliver obits and say hi to Chuck. And I know he’d go around and see people as well,” Weaver says.

According to Weaver, after retirement Freeman worked for a few years at Diamond Hills Chevrolet.

“He was a people person. We’d get together for lunch” regularly, Weaver recalls.

And since Freeman always kept busy, he ended up working part-time for Weaver Mortuary.

“He enjoyed meeting people, and since Chuck was well-known, he was a friendly, familiar face at funerals,” Weaver says. Freeman would end up getting a license to work in the industry, and became a prearrangement counselor for the mortuary.

Unfortunately, “Diabetes was real hard on him. He retired around 2004, or 2006, but he still helped” at the mortuary whenever families with connections to Freeman needed assistance.

For granddaughter Kelsey Gormley, Freeman “taught me and my sisters the value of being a part of a community, and that if we wanted to make an impact, we had to be involved,” she says. “He valued his friends and their respective contributions to their shared community. My sisters have each taken his example in our own way, volunteering to various causes and groups that we care about: Kylie is an animal rights activist and educator; Kristin advocates for the homeless and renters’ rights in Washington state; and I am in my second year serving on the alumni board of directors at the University of Redlands, and participate in the Redlands chapter of the American Association of University Women.”

Gormley notes that Freeman was a devout Rotarian until his health declined, spending many years volunteering at the annual Spaghetti Dinner Fundraiser for the Banning Stagecoach Days, which he was also involved with.

“He made sure that ‘Service Above Self,’” referring to Rotary’s motto, “was instilled in all of us. I was ‘volunteered’ to sing the national anthem at Rotary meetings and numerous community events where I was always introduced as ‘the granddaughter of Charles and Judy Freeman’ — even though I did, in fact, have parents!”

The Morongo Casino Resort & Spa and Casino Morongo are looking to hire dozens of new team members at two job fairs set for Monday, May 10 and Tuesday, May 18 from 10 a.m. until 1 p.m. in the Morongo Grand Ballroom.

Ahead of their Wednesday deadline for a short-range transit plan draft expected by the Riverside County Transportation Commission, Beaumont’s Community Services Director Elizabeth Gibbs gave a presentation on her department’s transit efforts to the city council at its April 20 meeting.

The Cultural Alliance of the Pass has adopted the theme ‘Keep the Arts Alive’ as it takes steps to welcome the Pass area back to fine art at its Banning Art Gallery, the only privately owned nonprofit fine arts gallery in this area.