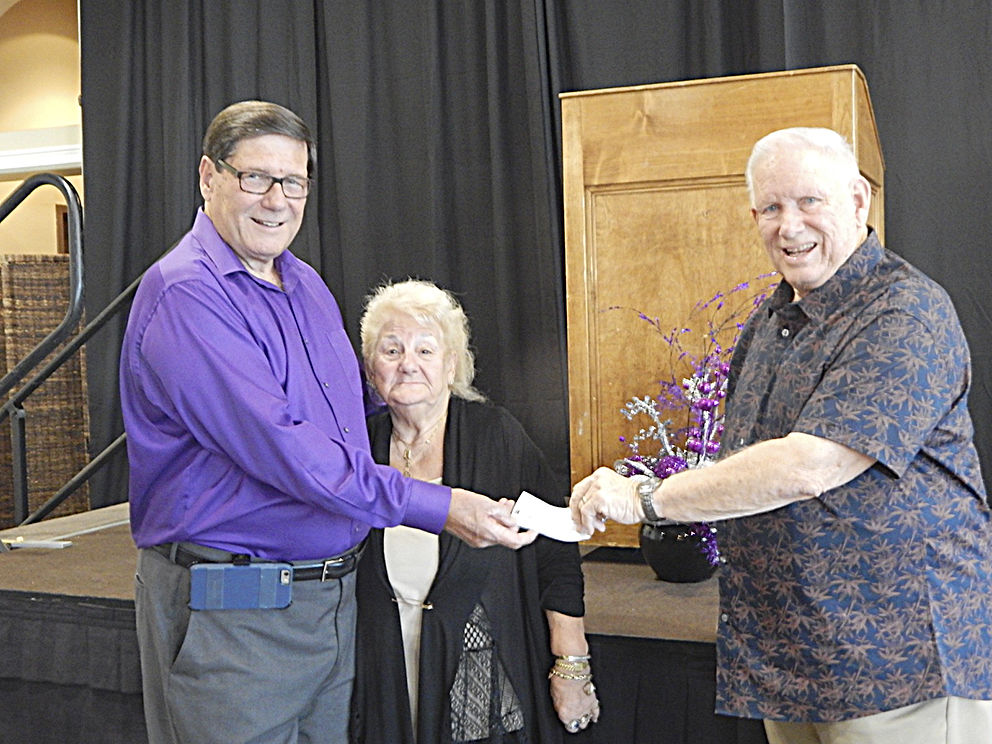 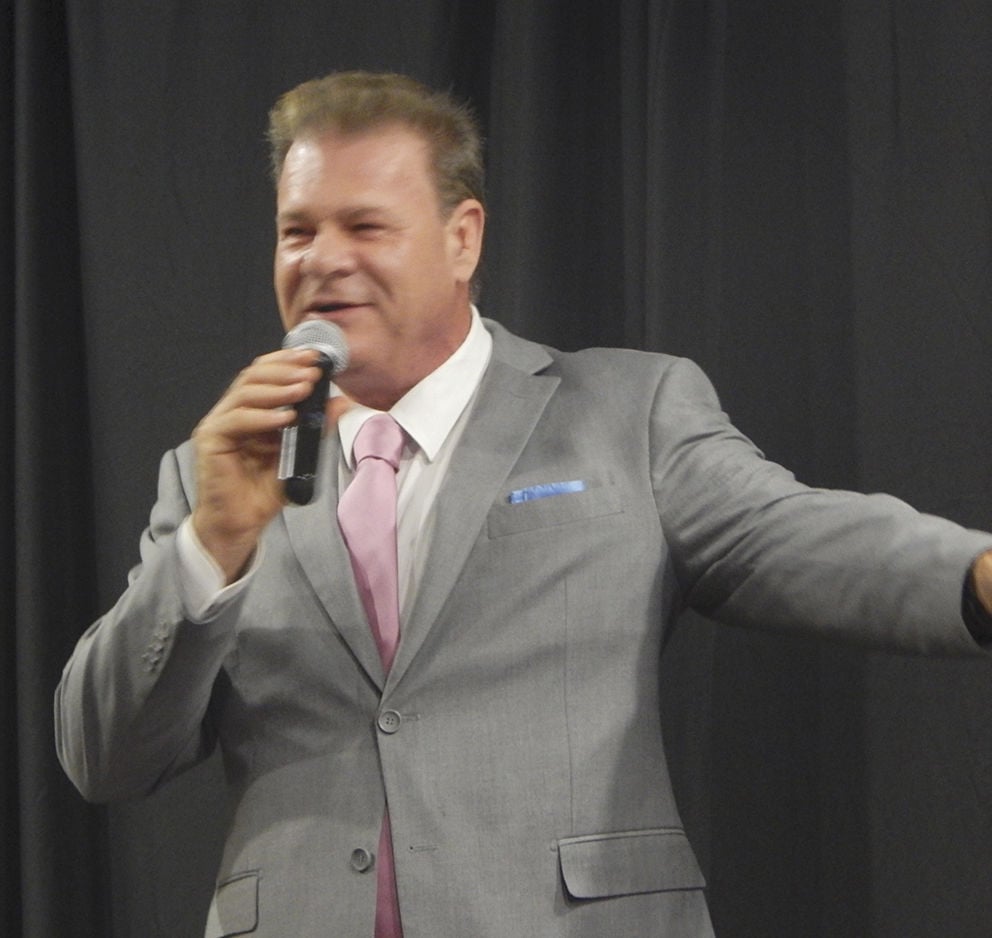 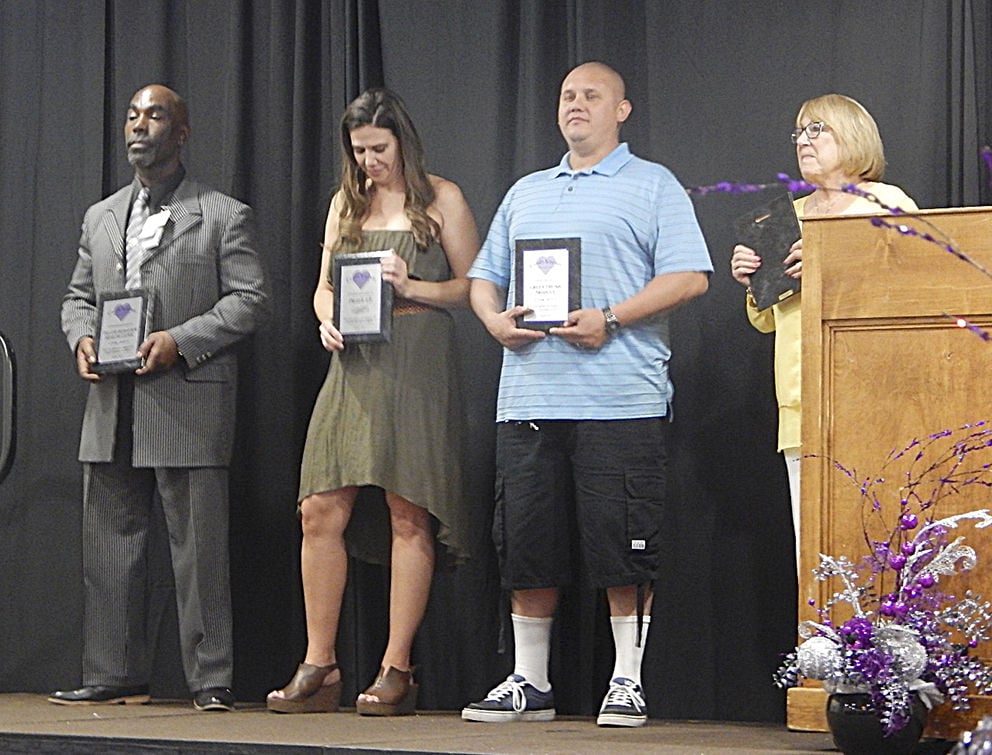 Ann Blair recognizes some of the sponsors for the Carol's Kitchen comedy show at dinner.

A night of comedy, good food and raising money to feed the hungry were the ingredients for a thrilling event last Saturday night during the Carol’s Kitchen fundraiser in the Morongo Tukwet Canyon Clubhouse in Beaumont.

Approximately 145 people – more than anticipated – attended the event sponsored by the Morongo Band of Mission Indians.

“The whole reason for the evening was to honor our sponsors and to have a little fundraiser,” said Ann Blair, chairperson for the dinner and comedy show.

Guests were treated to an elegant dinner, which started at 6 p.m.

The fundraiser started at 5 p.m., with guests arriving and finding their tables, which were decorated with beautiful purple and silver centerpieces.

Complementing the stage were purple, silver and white balloons.

Schwertfeger, who lives in Calimesa, said friends who live in Four Seasons told her about the Carol’s Kitchen event.

She decided to invite her sister, who lives in Indian Wells, to join her at the fundraiser.

“I would like to get more involved with the community,” said Schwertfeger.

Muela was not familiar with the non-profit organization that served its first meal 21 years ago.

Jim and Arlene Ragan founded Carol’s Kitchen in honor of their late daughter Carol, who was fatally struck by a drunk driver in 1996.

Carol was passionate about helping those who were less fortunate and the Ragans’ decided to start Carol’s Kitchen to continue her legacy.

Today, the non-profit serves 3,000 meals a month at six locations in Banning, Beaumont and Cabazon.

Carol’s Kitchen does not receive any government funding and relies on donations and fundraisers to continue its mission of feeding the hungry in the San Gorgonio Pass.

Sponsors are an important part of the group’s goal to raise enough money each year to provide meals in Banning, Beaumont and Cabazon.

Richard Weiss was the first comedian to take the stage.

He teased emcee Bob Allbaugh, who bore a resemblance to a famous popcorn giant.

“Give it up for Orville Redenbacher,” Weiss said as the audience clapped.

Weiss joked about his father mixing up names. Weiss said he wanted music ranging from Richard Marx to Skid Row.

His dad searched and searched, but was unsuccessful in finding his son the right music.

“Nobody had the Skid Marks album,” he said.

Weiss did some Rodney Dangerfield impersonations, having been told his comic style is similar to the late comedian, famous for the phrase “I don’t get no respect.”

After Weiss was comedian and high school teacher Mark Schumacher, who loved telling stories about his students.

Schumacher, who teaches social studies, said the students can wise-crack like the best of them. One of the kids said, “Did you notice that during Career Day, he took more notes than anyone?”

Schumacher realized that when he started telling jokes about marriage, the audience was faster to respond.

He described his wife as a Type-A personality – feisty and Italian. “She will honk the horn at cars when I’m driving. I point to my wife so they know. “It wasn’t me. It wasn’t me,” Schumacher said.

Ron Rhuman interacted with the audience by walking around between the tables and choosing people to tease.

He selected one audience member, Steve, who was wearing shorts to the dinner. Then he found the dapper Pete Anton, a former Carol’s Kitchen volunteer with a black hat and dressed in black.

Pete said he would gladly take Steve to the Garment District in Los Angeles for some shopping.

He also teased a man named Bernie who sells toilet paper for a living and Ruhman’s comic foil in the audience, Connie, said “He has job security.”

Ruhman also talked about going into Ralph’s grocery store, which has self-checkout. “I went down there and said, Oh, it’s just a mirror,” Ruhman said.

Chairperson Ann Blair said they had started planning the fundraiser in March and was told that the Morongo Band of Mission Indians was going to fund the dinner and comedy show.

Tickets were $50 per person.

Blair said that Cindy Graves coordinated the comedy show and found the comedians.

Carol’s Kitchen board president Marty Bauer said he was very pleased with the event.

“I feel it was a huge success,’’ Bauer said. “I was very pleased with all of the people who showed up.”

The annual Cherry Festival in Beaumont, scheduled for June 4-7 in Stewart Park, has been cancelled by the city of Beaumont, city manager Todd Parton announced at Tuesday night’s city council meeting.

How parents are explaining the coronavirus pandemic to their children; Nickelodeon puts together explanatory segment for kids

Many adults are trying to make sense of the coronavirus pandemic and sorting out the facts about this disease. Often times it can be a challenge to know what to tell children so they are not frightened.

Table of Plenty will provide a drive-thru food distribution starting Tuesday, April 7, outside of Freedom in Christ Church, 500 Grace Ave. in Beaumont.

The Beaumont-Cherry Valley Recreation and Park District announced Monday, March 30, that it is closing its doors due to the COVID-19 pandemic, until further notice.