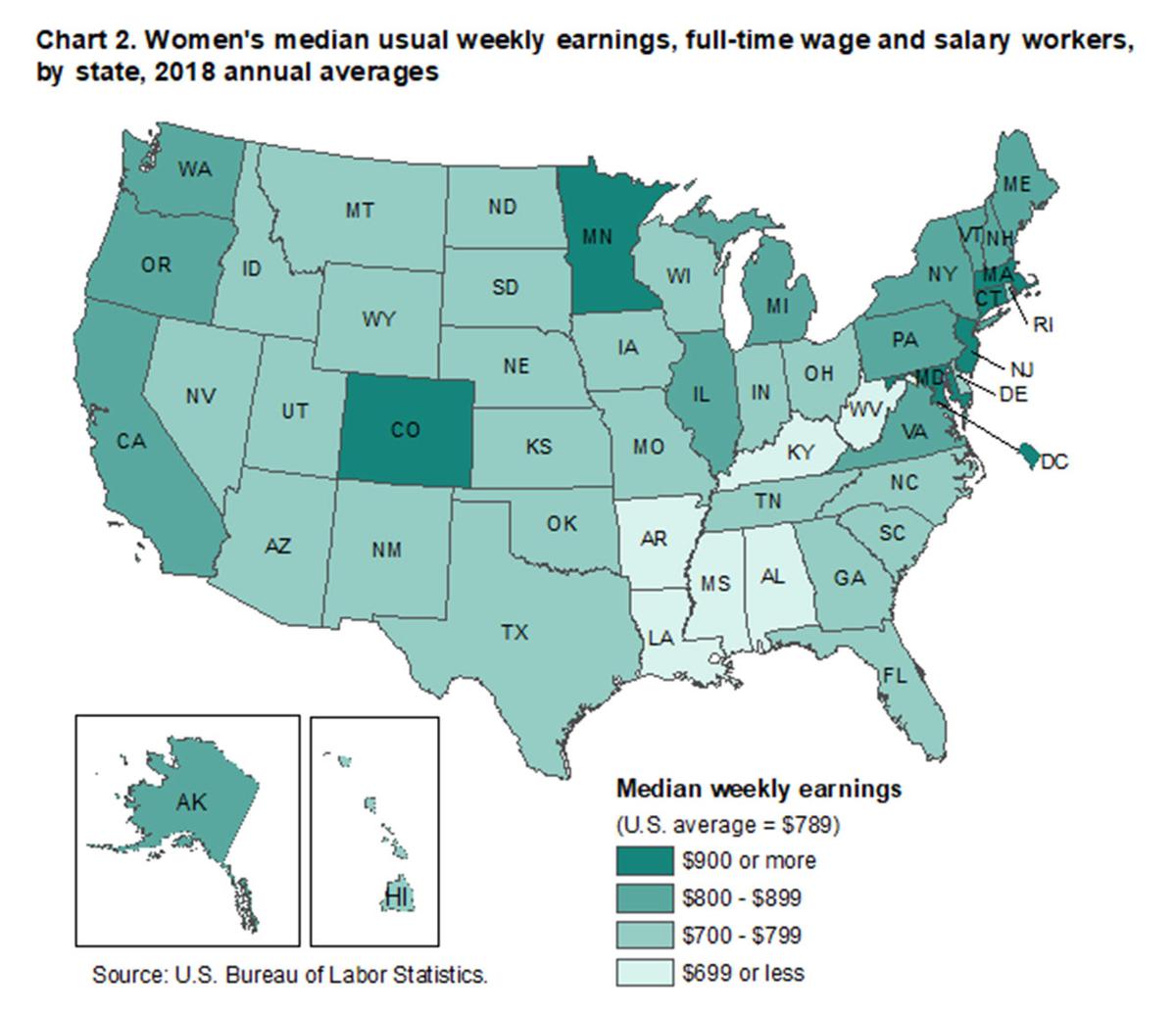 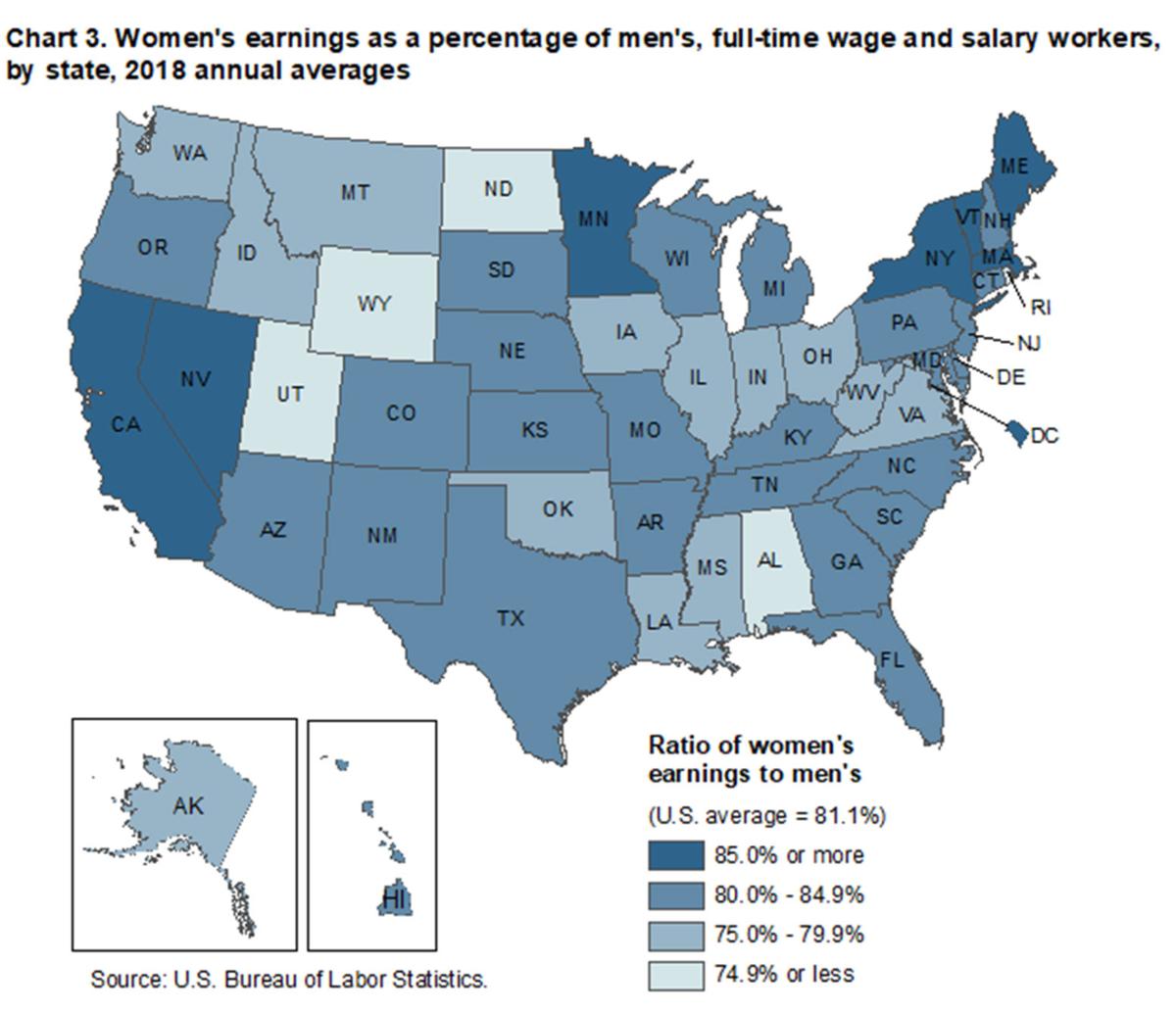 California women have narrowed the gap in their pursuit of equal pay, but it is still unbalanced due to the types of jobs men and women typically do.

In a report released on Jan. 8 by the Bureau of Labor Statistics, the women’s-to-men’s earnings ratio increased 4.9 percentage points from 2017.

The difference in pay between men and women is $5,985, and could be looked at as a difference of four months of rent for a 1-bedroom apartment at $1,500.

The median usual weekly earnings figure is representative of the uncontrolled gender pay gap, which measures all men and women regardless of job type, seniority, location, industry, years of experience, etc.

By comparison, in the same year, 78 percent of elementary and middle school teachers were women, and their median annual earnings were $50,766.

All that said, this is not an accurate depiction of pay disparity of men and women who perform the same job with equal qualifications and job titles.

When men and women have the same job descriptions, titles, education, skills, etc., women earn $0.98 for every dollar a man earns.

There is still a 2 percent difference between a man and a woman with the same qualifications; and the gap only shrunk $0.008 since 2015.

Notwithstanding, California women have earned above the national average since data collection began in 1997.

The region with the largest gender wage gap was Wyoming, where women earned just 67.8 percent of what men earned, followed by Utah and Rhode Island with 71.8, and North Dakota with 73.9 percent.

The report states the differences among the states reflect, in part, variations in the occupations and industries found in each state and differences in the demographic composition of each state’s labor force.

According to the Institute for Women’s Policy Research, women will finally reach pay parity in 2059. Hispanic women will have to wait until 2224 and Black women will wait until 2130 for equal pay.

The estimates in the report were obtained from the Current Population Survey, which provides information on the labor force, employment, and unemployment, by the Bureau of Labor Statistics, which is based on surveys of 60,000 households.

The wage and salary workers reflect people age 16 and older who receive wages, salaries, commissions, tips, payments in kind, or piece rates on their sole or principal job.

Hospital ratings: San G falls in some, scores well in others

San Gorgonio Memorial Hospital has been awarded three stars out of five recently by U.S. News & World Report for “Patient Experience,” and earned a “High Performing” rating when it comes to knee replacements, though it was rated “Average” for hip replacement, heart failure and chronic ob…

The Morongo Casino Resort & Spa announced the recent completion of a sweeping renovation project that has transformed the heart of the property by adding elegant new décor and amenities throughout the casino floor, including new bars and three distinctive new restaurants.

What Damon Rubio did for the Mary Pickford Theatre in Palm Desert, will not require as much effort to enhance the services and experience of movie goers in Banning.

Calling all young professionals! The Western Riverside Council of Governments (WRCOG) is excited to open the application period for the fifth cohort of the Public Service Fellowship Program!

California women have narrowed the gap in their pursuit of equal pay, but it is still unbalanced due to the types of jobs men and women typically do.