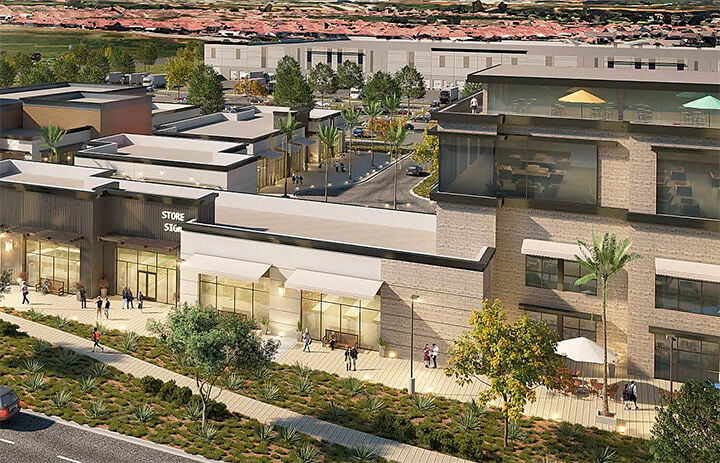 An artist's rendition of what a view of part of the Beaumont Summit could look like. 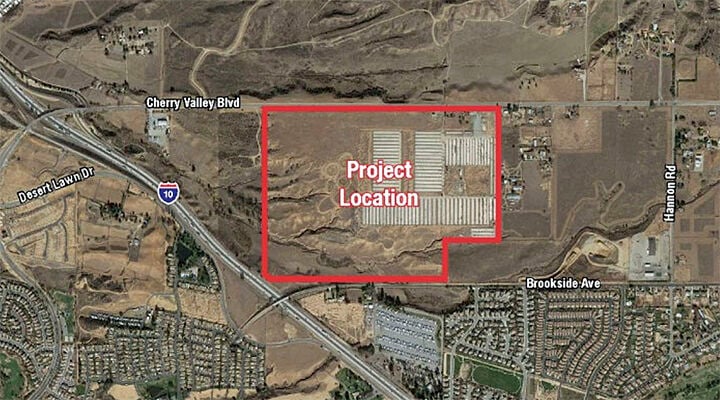 An artist's rendition of what a view of part of the Beaumont Summit could look like.

The recommendation to deny the project will now have a final say from the Beaumont City Council.

In August 2021 Scottsdale, Ariz.-based Exeter Cherry Valley Land, LLC applied for an amendment to the city’s general plan, along with a specific plan, a tentative parcel map proposal, potential plot plans and its environmental reports to convert land currently zoned as residential into commercial, industrial and open space.

The proposed project sits on 187 acres between Cherry Valley Boulevard and Brookside Avenue, east of the Interstate 10 freeway in Beaumont, and would involve up to 560 single-family homes on lot sizes ranging between 7,000 and 20,000 square feet.

The property was previously occupied by the former Sunny-Cal Egg and Poultry Ranch.

The proposed development would have included 139.8 acres of e-commerce space that could reach 2.5 million square feet; 10.9 acres for a 220-room, four-story hotel, along with an adjacent 25,000-square-foot restaurant and an additional 25,000 square feet of retail space; 21.15 acres of parks and trails, and an additional 8.71 acres of open space as a buffer.

Beaumont Summit Station started out as the Sunny-Cal Specific Plan, which was submitted in August 2007, was challenged in court later that year and upheld by the California Court of Appeals in 2010.

That plan allows for 497 previously approved lots to be developed.

The majority of the land was annexed into the city in 2017.

A description of three buildings were included as part of the Beaumont Summit Station’s submissions: the smallest building would be 358,370 square feet; another would be 985,860 square feet; and the largest would be 1,213,235 square feet.

“The city needs more jobs, not more homes,” according to Cristina Virgilio, an investment and leasing officer with the Anaheim office of EQT Exeter. Her company anticipated that 2,800 jobs would be generated once Beaumont Summit Station was up and running. It would also add $1.33 million to the city’s general fund, and the city could benefit from commitments of $30 million in investments to area traffic improvements.

The company has given the Beaumont-Cherry Valley Recreation and Park District a memorandum of understanding to invest nearly $10 million in a 147-acre public park on the site, along with an association trust that would provide funds for its maintenance of multiuse fields, an amphitheater and playground.

Virgilio told the planning commission that there was a 10-to-1 ratio of over 1,000 residents canvassed by her company in support of $18 million in traffic improvements being promised.

The majority of comments received by the commission were against the project, addressing traffic, environmental and health concerns, with some support in favor of Beaumont Summit Station coming from union members who could use the construction jobs, and property owners who did not appear to live in the city.

Planning Commissioner Sedrick Bedolla said, “There needs to be growth in Beaumont, managed responsibly,” and expressed concern about added stress to the area’s existing infrastructure.

“I don’t see how adding another building to the Cherry Valley intersection would help, even with upgrades to the interchange,” said Commissioner Anthony Colindres. “We have to figure a better way for a win-win for the community and the developer.”

Commissioner Jessica Black seemed discouraged that the homes approved for the site previously will not get built, considering how much time the site has sat vacant, and noted that “I wouldn’t want to live across from that monstrosity,” referring to the Beaumont Gateway warehouses being built across the way. She added that it should come down to “a consideration of what do we do with that land” that will otherwise remain unoccupied.

Commission Chairman Nate Smith felt that the project might be “premature.”

“With the promises to provide infrastructure without having any agreements in place to actually enforce it, I think that needs to be completed before anything is brought here for discussion. We have promises for all these things” but “we don’t have any way to enforce it as a condition of approval. I don’t think it’s right.”

Further, he said, “We have an entitlement for a commercial center that doesn’t match the marketing that was provided by the applicant … there’s a lot of things on here I think at best is premature for consideration.”

He said, “At minimum I think this project would need considerable redesign and reconsideration,” and noted that there are other areas in town already zoned for similar purposes that Exeter Cherry Valley Land, LLC is striving for, then he strongly recommended to his colleagues deny the project.

Black echoed Commissioner Patrick Stephens’s observations that there were 45 sentiments of protest against the project, and 10 in support, saying that she felt the commission’s purpose was to serve the people, and reflect the public’s interests.

“I don’t know that I would necessarily ditch the whole project, but I think we really need to consider some major changes,” Black said. “I don’t think we’re ready to take it to council at this point.” She also said that if the project does come back, she would like to see more “transparent” community outreach from the company.

After nearly five hours of public hearing, Black motioned to continue the item, but the motion died for a lack of a second.

Colindres then motioned to recommend to the city council to deny the project in its entirety, which was seconded by Stephens, passed 4-1 with Black voting against the recommendation.

Following the commission’s decision, EQT Exeter issued a press release stating that Beaumont was at-risk of losing $100 million in community benefits, including a $60 million investment for improvements to the Cherry Valley Boulevard-Interstate 10 interchange, and another $30 million for freeway and city street upgrades, along with $10 million for the regional sports park.

“The Beaumont Summit Station is being proposed as a superior alternative to the nearly 500 homes already approved for the site,” according to the company. “The housing project known as Sunny Call, originally approved by the city in 2007, would only provide $4 million in funding for the interchange improvements.” Further, “The Planning Commission vote ignored that the 497 homes already approved would actually have greater significant environmental impacts than the Beaumont Summit Station, and would do far less to address traffic along the already failing Cherry Valley Boulevard and interchange, while using 80 percent more water and providing fewer community benefits.”