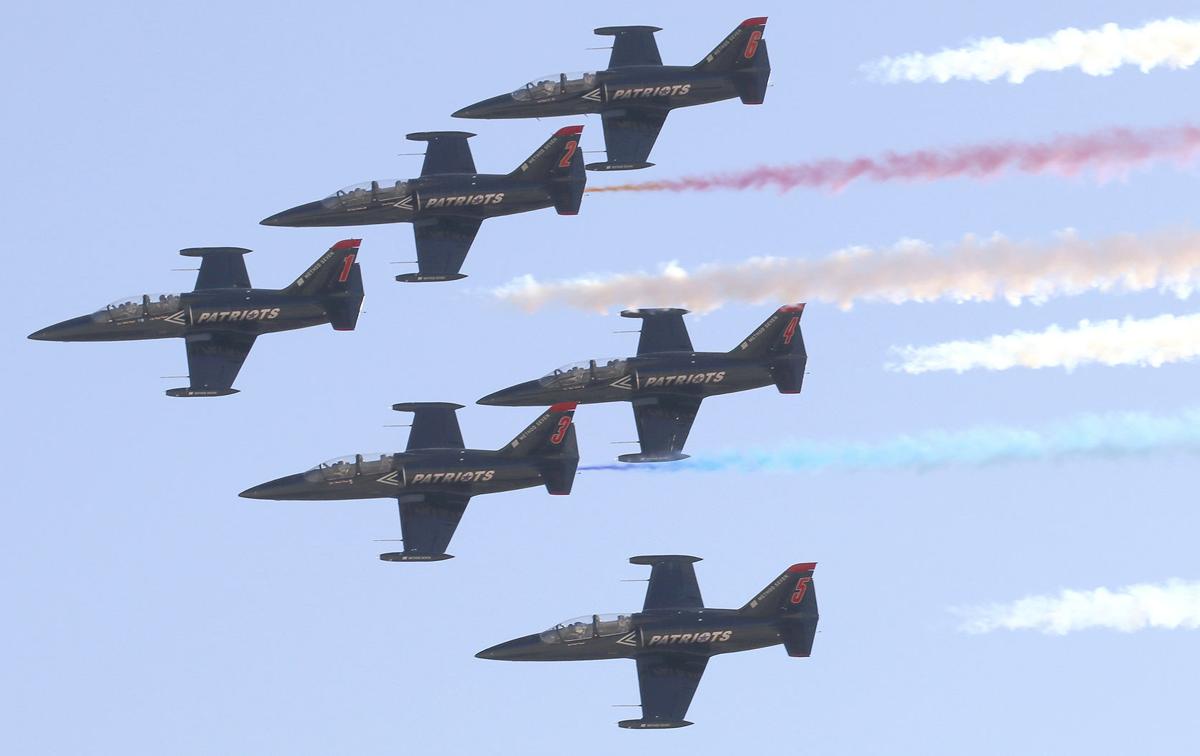 The Patriot Jet Team was the star of the SBDFest 2019, at the San Bernardino International Airport. They presented their patriotic colors, as they blasted by an applauding audience, last Sunday. 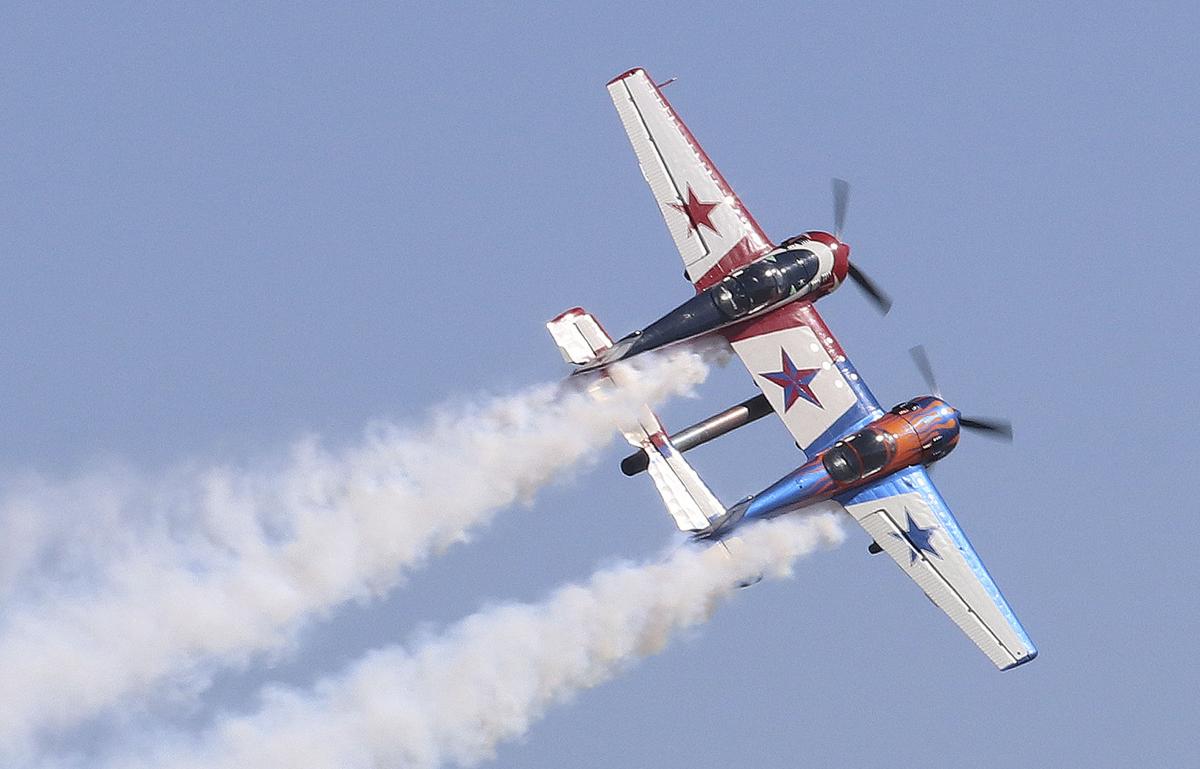 The YAK 110 , a unique two planes in one, performed death-defying stunts, at the SBDFest 2019, at the San Bernardino International Airport. 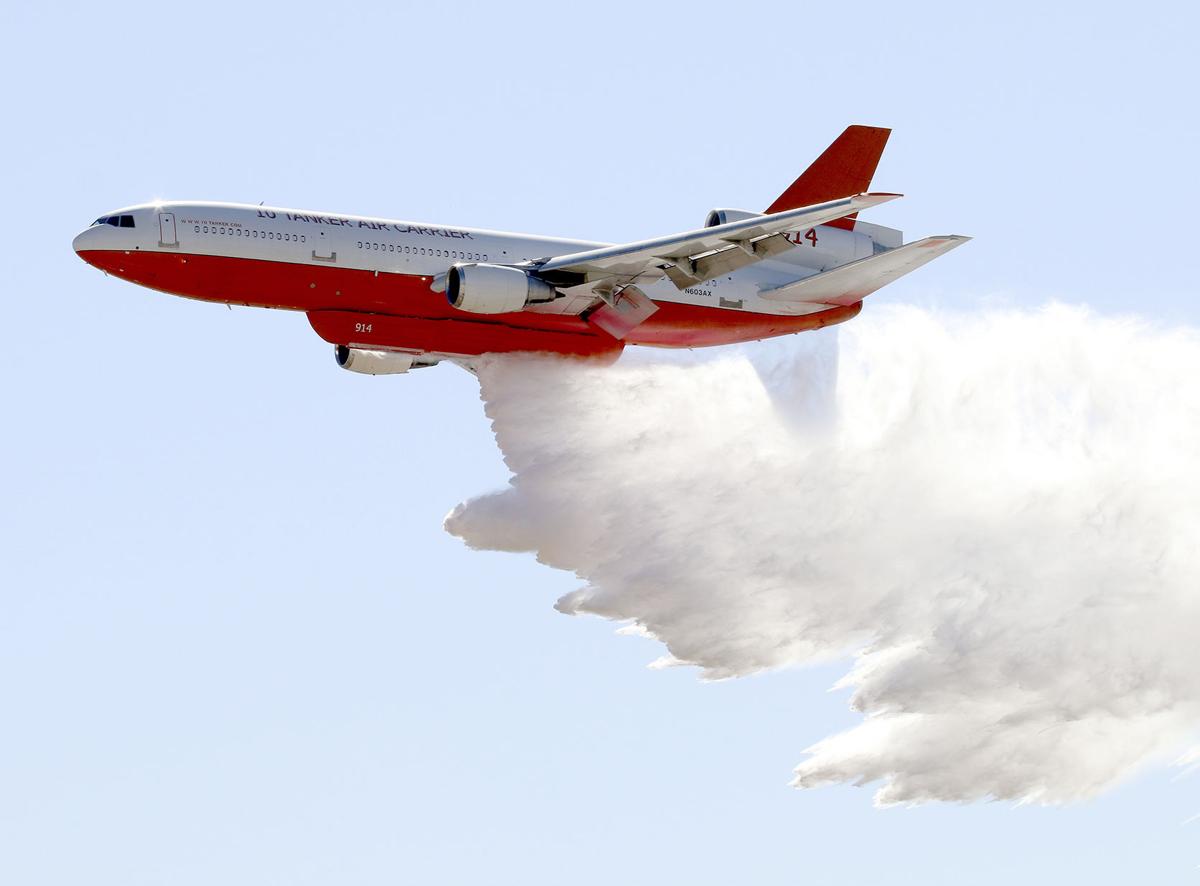 Canada's 10 Tanker Air Carrier releasing a portion of its approximately 10,000 gallon payload of water, during a demonstration at SBDFEST 2019, at the San Bernardino International Airport.

The festival had something for everyone.

The San Bernardino City Unified School District’s Teen Music Workshop and Viridian Lights Band performed on the Boeing 737 stage, at the outset of the event.

Sky divers, from the Red Bull Air Force, parachuted to the tarmac, for an opening ceremony.

The last jumper came to the ground carrying a extremely huge American Flag.

There were many static planes for the public to enjoy, such as the Fairchild PT-19, a Douglas DC-3, Thunder Express, a huge Douglas C-47, that was used on D-Day, and more.

A unique, one-of-a-kind plane performed. It was the YAK 110. This plane, piloted by Jeff Boerboon, was two actual planes fused into one.

The YAK 100 performed death-defying feats to an applauding crowd.

The YAK 110 climbed to an extreme altitude, then it would free-fall in its own smoke, before turning its engines back on.

The demonstration of a 10 Tanker Air Carrier DC-10 brought lots of ooos and ahhhhs, when it slowly approached center stage.

Flying at a low altitude, the 10 Tanker dropped a portion of its 10,000-gallon payload of water, providing an up-close and personal view of how it is used in fire suppression.

Mid-way through the air show on Sunday, the event was temporarily interrupted, due to a fire in Big Bear and Orange County.

Spotter planes and tankers were arriving and departing the airport.

The spotter planes would refuel, and the tankers would reload their bays with phos-check.

The five motorcyclists would fly off a ramp and do somersaults and acrobatics.

Some of the riders would let go of their bikes, as it flew in the air.

“This is a good air show to attend,” said Kevin Alvarado, of CA-BDF, from San Bernardio.

“There’s definitely a lot to see. The planes are neat.

Connor and his team were educating the public on fire prevention and what the Department of Forestry does during wildfires.

“The show was entertaining,” said Zack Maddas, a resident of San Bernardino.

“I liked that the Patriot Jet Team is a civilian run aircraft that does military maneuvers.

“I’ve never seen so many planes in one area.

There was a C-17 cargo plane on static display.

The belly of the plane was open, which allowed dozens of visitors to walk through the plane and the cockpit.

Brooks, from Highland, is an avid air show fan, and he loves the military.

“It’s exciting to be here walking around and seeing all of these great aircraft.”

Latin R&B Tierra and Stone Soul performed near the close of the show.