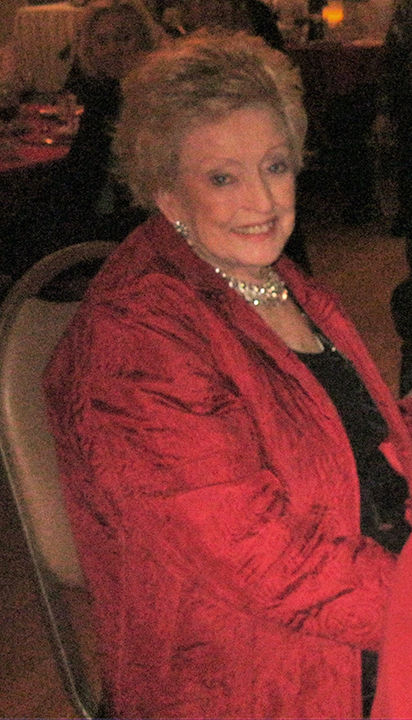 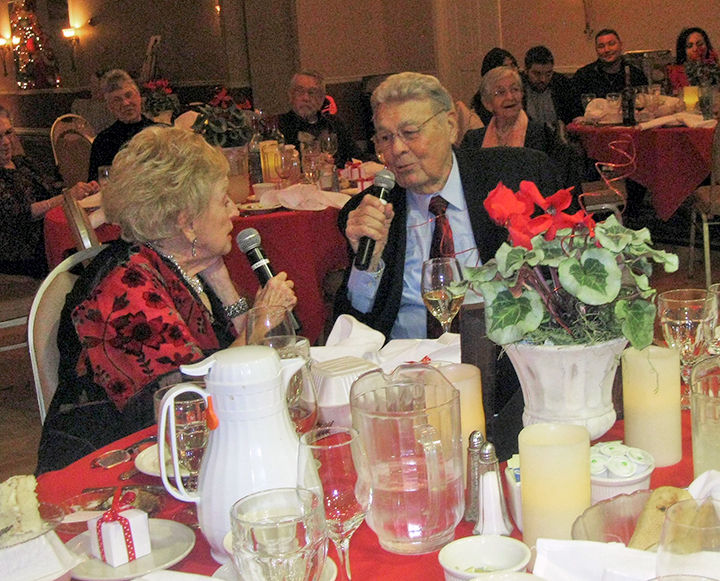 Fred Warner sang "You Belong to Me" to his wife Carol on her 90th Birthday celebration. 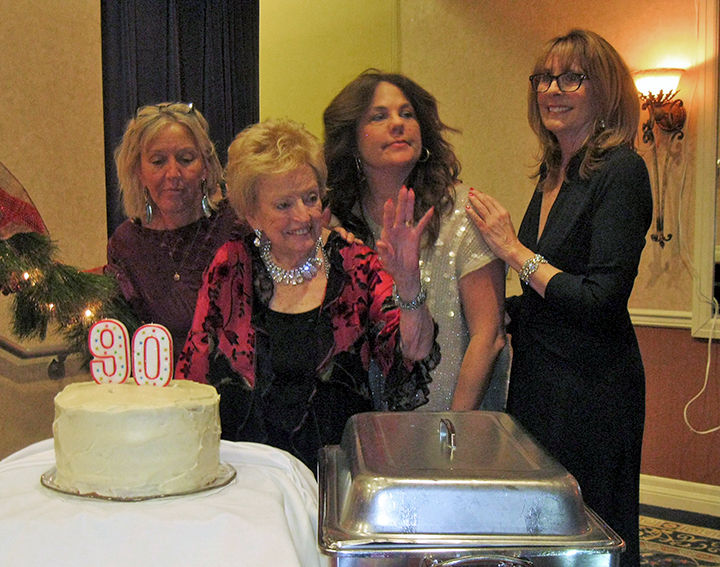 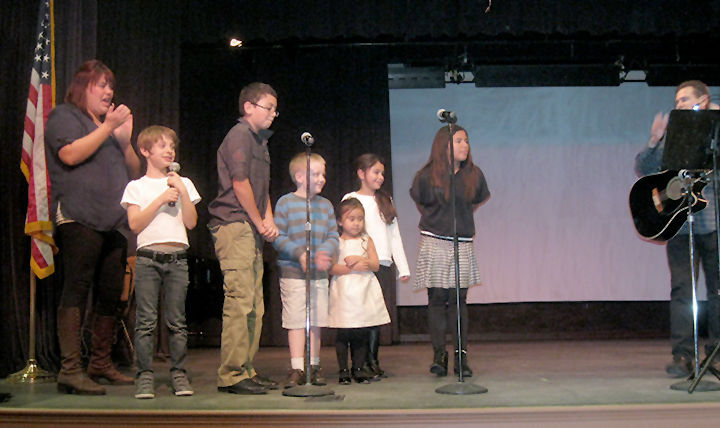 All of the 12 grandchildren and 4 greats were at Carol Warner's party with some of them performing onstage for the guests. 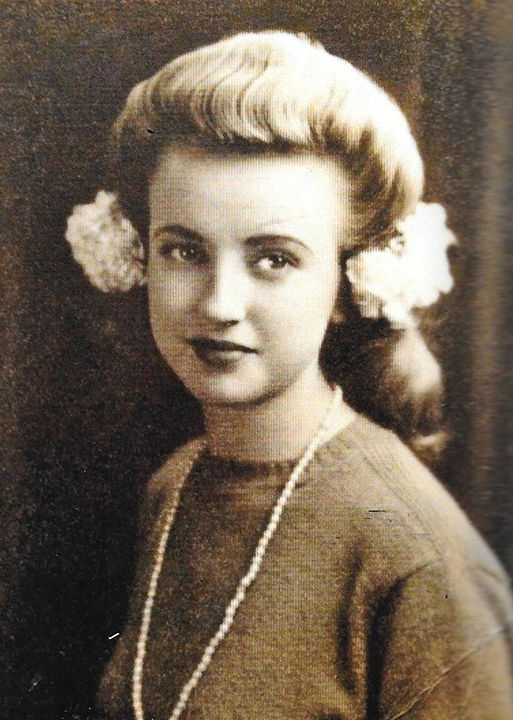 A young and very beautiful Carol Warner as she appeared on the invitation to her 90th birthday party.

Fred Warner sang "You Belong to Me" to his wife Carol on her 90th Birthday celebration.

All of the 12 grandchildren and 4 greats were at Carol Warner's party with some of them performing onstage for the guests.

A young and very beautiful Carol Warner as she appeared on the invitation to her 90th birthday party.

The invitation began “On Christmas Day, 1924 a beautiful and precious baby girl entered the world....” and went on to invite us to the celebration of Carol Warner’s 90th Birthday which was held in the Main Clubhouse Ballroom on the evening of Saturday, Dec. 27.

Remarkably, this party was the first real Birthday Party Carol had ever received because having a birthday on Dec. 25 made it rather improbable for a birthday party since everyone is so busy celebrating Christmas.

Carol and Fred Warner’s beautiful daughters Robin, Kellie and Shannon decided it was definitely time for Carol to enjoy a special birthday party just for her, in honor of her 90th birthday and they really put on a beautiful event.

Carol and Fred have a large family with 12 grandchildren and three great grandchildren plus one step great grandchild. Every single one of them attended the party for “Nonnie” with the exception of granddaughter Liza who lives in Spain. Liza was unable to attend but did send a loving tribute to her grandmother on the big screen on stage though, so it was as if she was with us too.

Along with Robin, Kellie and Shannon, there was a fourth daughter Terry who tragically passed away in 2002. Touchingly throughout the party, Terry was remembered, as the daughters still consider themselves as four sisters.

After an elegant prime rib dinner, the grandchildren and great grands went onstage and we were treated to a wonderful show. Ethan, the oldest grandson who currently has his own talk radio show in Los Angeles served as M.C. of the production. Granddaughter Sara, a very talented dancer entertained us as did Kaylyn on the guitar and Ella who played piano. Everyone else served as backup singers. They were adorable.

A cousin Harold Payne a professional musician with gold records to his credit then sang two songs with his guitar which he dedicated to Carol.

Of course, no Warner family gathering would be complete without a song or two from Fred and he did sing a beautiful touching version of “You Belong to Me” to his sweetheart, Carol.

After the big show, the stage was turned back to Sun Lakes favorite Jon Destry who entertained the guests all evening with his music and zany comedy acts.

Carol attended Van Nuys High School in the valley, then worked at Warner Brothers as a secretary. She and Fred met in high school and after a stint in the Navy in World War II, Fred proposed to Carol at the famous Coconut Grove and they married. Much later on Carol worked as a Legal Secretary and then managed a law firm before retiring. She and Fred moved to their Pleasant Valley Avenue home in Sun Lakes in 1991.

Carol immediately signed up for dancing lessons and became a tap dancer appearing in the Follies and other productions and again, many long time friendships were developed. A group of six dancers began to get together after class on Tuesdays and the long time “Poker Group” was formed. Carol, Lilly Ramirez, Mary Strittmatter, Rose DeMaria and the late Selma Munz and Barbara Smith very seldom missed a Tuesday because that was considered their “sacred” poker day. Lilly and her husband Vince were in attendance at the party.

Carol also became active in the Sun Lakes Garden Club for which she wrote their publicity, served on the boards of the I.C.C. and Big Band Dance Club among others.

Along with their family, there were many special long time friends at the celebration. Jeanne Starr and her daughter Donna, both Sun Lakes residents were there. Jeanne and her late husband Don were a young married couple living next door to the Warner’s in a duplex court in 1949. They immediately became life-long friends and their children have known each other their entire lives.

Another Sun Lakes resident Jake Henning is a lifelong friend of the Warner’s as well. Jake went to high school with Fred and Carol and then he and Fred were partners together on the LAPD force. Jake later moved to Sun Lakes and married Donna and for a while they lived on Pleasant Valley Avenue right across the street from the Warner’s. Jake is still playing music and looking good in the Sun Lakes Big Band.

For many years, the Warner’s hosted (and still do occasionally if the weather is nice) their infamous “Happy Hours” in the driveway of their home. At first when the neighborhood was very young, the residents built a large and heavy tile bar with wheels which they rolled back and forth across and up and down the street and to neighbors homes every time there was a party. Unfortunately, as age crept in, the bar got too heavy to move and ended up on the Warner’s patio, where it still occasionally serves its’ purpose.

Ah...the good old days. Happy, Happy Birthday, Carol. You still have that special sense of style and grace. You are what 90 is supposed to look like!