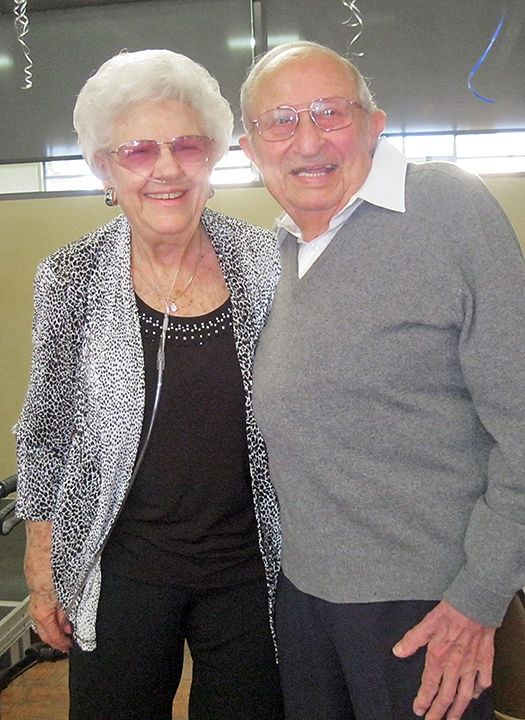 Shirley and Hal Barsh celebrated Shirley's 90th Birthday with a big party in the South Clubhouse. 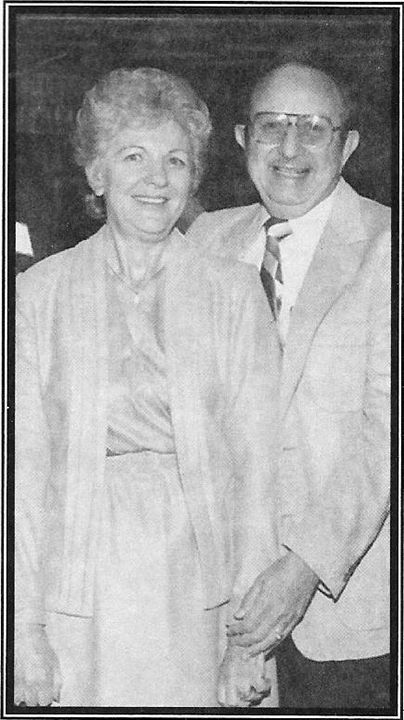 The invitation to Shirley's 90th birthday celebration included this picture of Hal and Shirley titled "A Few Decades Earlier." 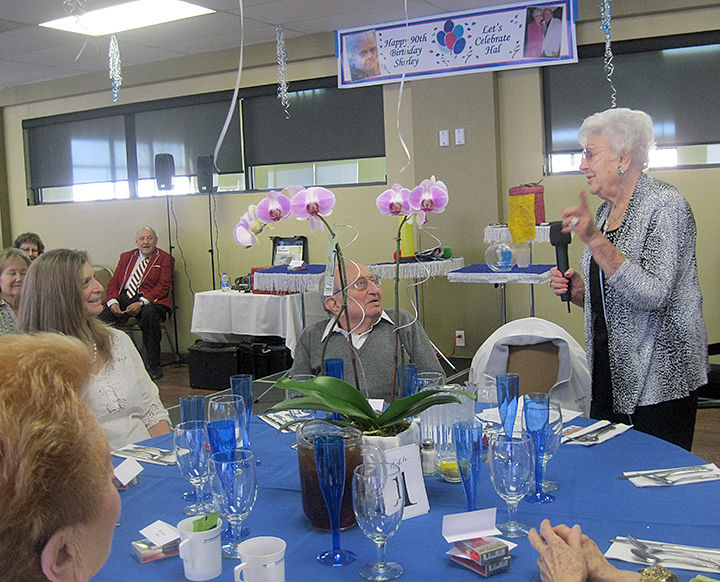 Shirley spoke of their early days in Sun Lakes and acknowledged many of their friends who were in attendance at the party. 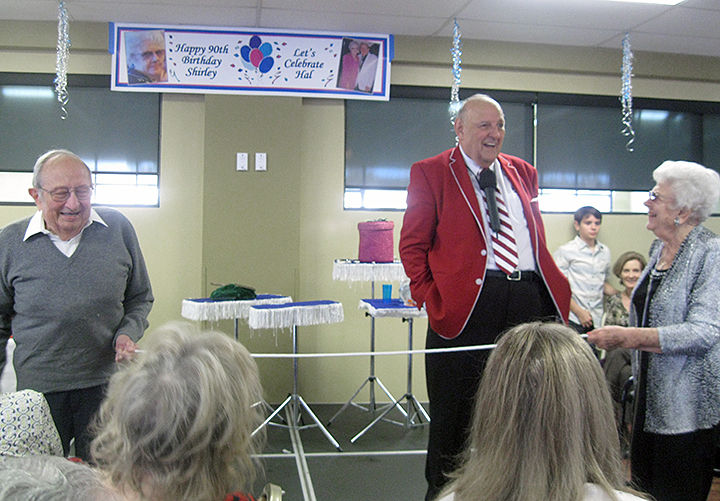 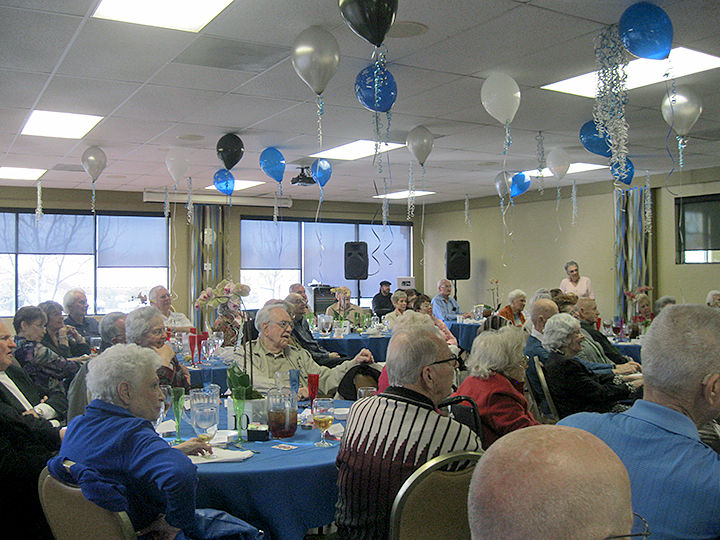 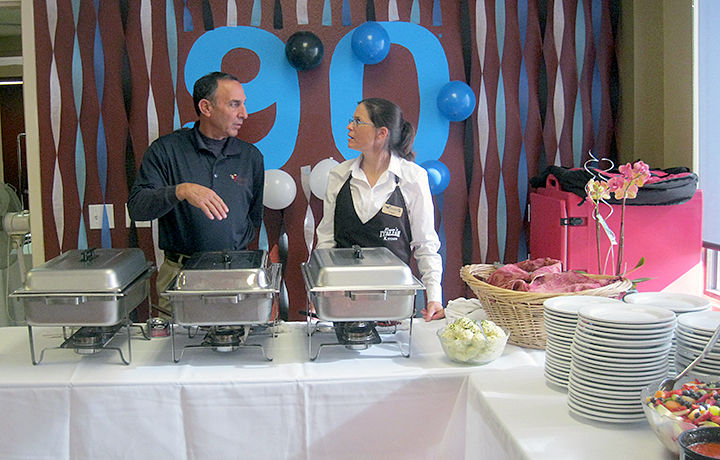 Shirley and Hal Barsh celebrated Shirley's 90th Birthday with a big party in the South Clubhouse.

The invitation to Shirley's 90th birthday celebration included this picture of Hal and Shirley titled "A Few Decades Earlier."

Shirley spoke of their early days in Sun Lakes and acknowledged many of their friends who were in attendance at the party.

A wonderful afternoon party combined celebrating the 90th Birthday of Shirley Barsh and the recent successful open heart surgery of Hal Barsh was held in the South Clubhouse on Sunday, January 4, 2015 with many relatives and long time Sun Lakes friends in attendance.

The South Clubhouse was beautifully decorated with a gala theme in blue and white. Many, many balloons and streamers descended from the ceiling. The large banner showing pictures of Hal and Shirley as newlyweds and then as they are today which proclaimed “still celebrating their love” was placed along the back wall. The same theme and pictures were duplicated on a gorgeous cake served to the guests later after the celebratory champagne toast.

At each table along with gorgeous orchid centerpieces, was a good luck jade party charm placed at each setting which had been created for the party by the Barsh’ cousin Marian Heymsfeld’s company Zorbitz .

The two Barsh daughters, Wendy Barsh and Sharon Sternoff with help from their friend Paula Henson, Mike Smith and Joan Silver set up the room and the wonderful decorations. Wendy lives in Santa Monica and Sharon resides in Redmond, Washington. Both spend as much time as possible with their parents in Sun Lakes.

Their good friend Mike Smith, who is a motivational speaker served as a very personable master of ceremonies.

Shirley was involved in every aspect of the planning and she did a fabulous job. She chose Johnny Russo (of Russo’s Italian Kitchen) to cater the event and as usual his food and the service from his staff was perfection.

“Magic” Mike Ballardo, the terrific magician from La Quinta, was at his best, as was his rabbit friend in the box. The goldfish in the bowl, we’re not so sure about.

As we were being seated and before the party actually began, Mike went around table to table and performed card tricks. The most impressive was the trick where Magic Mike somehow replaced a regular Queen of Hearts card with a same card but showing Shirley’s face as the queen. Now how did he do that?

During the entire party, Shane, the D.J. played wonderful music which we all recognized and enjoyed.

The theme of love was all around the room that afternoon as the entire day was intended to celebrate the wonderful love Shirley and Hal share, the friends they have made and their wonderful times while living in Sun Lakes for some 25 years.

Many of the guests attending were wonderful Sun Lakes friends with whom they share many memories from their early involvement and creating of many of Sun Lakes now thriving clubs. Among those long time friends enjoying the party were Ted Horton-Ballard and Buch Ballard, Dottie Ritter, Vince Van Wormer, Sheila Hammer, Bobbie Freeman, Larry Liebers, Joe Mueller, Bob and Joanne Ewert, Nancy and George Weisz, Anne Rubin, Roz and Burt Feldman, Jay and Barbara Jesus, Jan Rogers-Stapel, Bob and Janice Jensen and so many, many more early leaders in our community who we are grateful to for giving us their time and talents so many years ago.

Shirley who looked beautiful at the party, was at her best as she held the microphone and gave us a synopsis of their many years in Sun Lakes. Both she and Hal were very active and instrumental in helping with the development of many clubs and groups in Sun Lakes.

In addition to Sun Lakes, Hal served the city of Banning for many years as a Banning Planning Commissioner.

Many of the people attending the party remembered the early beginnings of several of the clubs which are now flourishing. The Barsh’s were active members of the Drama Club when they built Sun Lakes floats for the Banning Stagecoach Parade.

About 18 years ago, Bobbie Freeman started Bosom Buddies which Shirley participated in as the beginning of a support group for those who had or were about to go through breast cancer surgery or treatment. That organization is now part of the San Gorgonio Hospital and has helped thousands of women.

Hal was president of the Sun Lakes Chorale for three years and produced the tickets, programs and posters for many years.

When Hal and Shirley first joined the Drama Club there were only six members. They both did most everything needed and with other volunteers, produced the programs and tickets, acted in plays, built the sets and scenery, etc.

In the early days, Shirley served as Chairperson of the Recreation Advisory Committee which is where the July 4th Golf Cart Parade began. The couple were also active in the Travel Club.